When Google announced Chrome OS as a platform, it talked about LTE as one of the defining characteristics. At the time, Google pitched Chrome OS as always up-to-date and backed up because your laptop would have a constant connection. There have been some LTE-equipped Chromebooks but none for the past few years as manufacturers have focused more on the budget end of the market. The new Samsung Chromebook Plus V2 brings LTE back to Chrome OS, but it does so with a higher price tag.

Samsung's latest Chromebook has some desirable features: a sharp display, an included stylus, dual Type-C ports, and that integrated LTE. However, the experience is hampered by a mediocre keyboard, occasional performance hiccups, and a heavier than expected chassis. The Samsung Chromebook Plus V2 LTE is not unique in these drawbacks, but I'd expect just a little more for $600. Still, if you need LTE in your Chromebook, this is the only way you'll get it right now.

Samsung is an old hand when it comes to making laptops, so you've probably encountered a few of its computers in the wild. The design of this device is similar to the company's mid-range laptops with a few Chrome-specific features. This is a convertible device, so the screen hinge folds all the way back so you can use the device in tent, tablet, or stand mode. That's essential for me so I can more easily plug in a real keyboard, but it's also better for using the touchscreen. 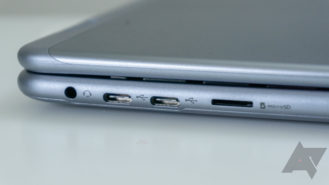 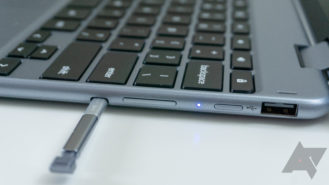 The Samsung Chromebook Plus V2 LTE is better as a touch device than many Chromebooks because it comes with a bundled stylus. It's not only included but actually docks inside the laptop so you won't lose it. The stylus lives over on the right edge in a "push-push" slot. It looks like Samsung's S-Pen from a Galaxy Note, but it's just a capacitive stylus with the standard Chrome OS stylus tools. Next to that, you've got the volume toggle, power button, and USB-A port. On the opposite side, there's a microSD card slot, headphone jack, and two USB Type-C ports. I'm pleased Samsung included two Type-C ports in addition to the regular USB. Although, I wish the Type-C ports were on opposite sides. You can charge the laptop through either port, not that it matters much when they're both in the same area of the laptop. 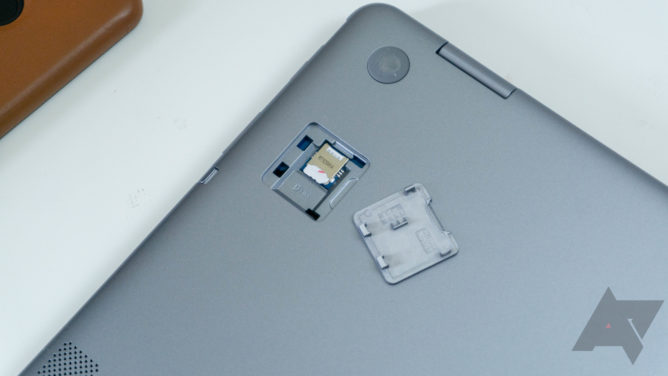 If you flip the Chromebook over, you'll immediately see what makes it special—the SIM door. Pry that door open, and you can slot in a Verizon SIM card for integrated LTE connectivity. Yes, that's only Verizon for some reason, and you'll probably notice while mucking around in the SIM compartment that the entire bottom chassis is plastic. A lot of similarly priced Samsung laptops at least have metal keyboard decks, but here, metal is limited to the top lid. The plastic makes the Chromebook V2 feel a little cheap, and it flexes noticeably when you apply pressure. I would wager Samsung went with plastic for better LTE reception and to keep the weight down. This device already clocks in at a hair over three pounds,  which is heavier than other sub-13-inch laptops. 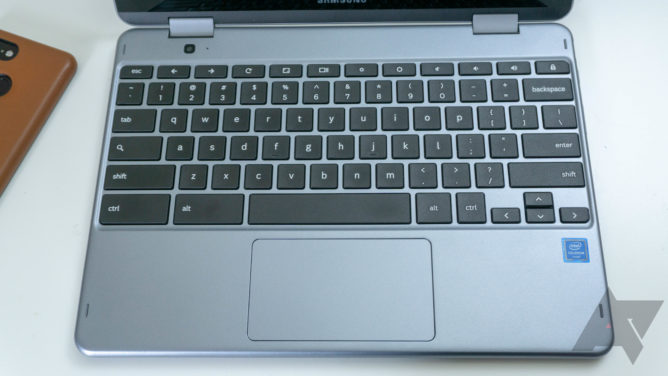 The keyboard is typical of Samsung laptops in this size range. The keys are just slightly smaller than standard, and it can feel a little cramped at times. Tactility and travel are good, but the typing experience is, in a word, mushy. I chalk this up to the flexible plastic frame, which makes the key bottom feel far too soft. It's also not backlit, which it should be at this price. I don't hate the keyboard, but it's not what I'd expect on a $600 Chromebook. The trackpad also feels like it came from a cheaper Chromebook. The sensitivity is fine, but the click mechanism feels inconsistent across the surface (eg. the corners flex more before the pad clicks). On the flip side, Samsung was clever to put a camera on the keyboard deck so you can snap photos in tablet mode. 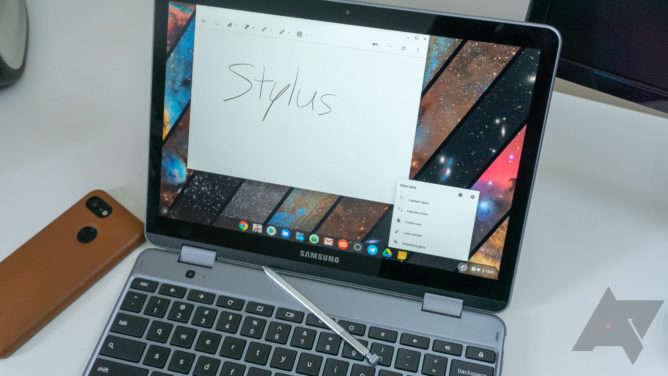 The display is very similar to the Pixelbook's—it's 12.2-inches and 2400x1600. I like the slightly taller aspect ratio on a laptop, and it looks both sharp and bright. The glossy finish makes colors pop, but the glare is annoying in certain lighting conditions.

The Chromebook V2 comes with an Intel Celeron 3965Y CPU, a fanless dual-core chip clocked at 1.5GHz. There's also 4GB of RAM and 32GB of storage.  The specs are a little lackluster for the price, and consequently, the performance falls short of the mark I'd like for a $600 Chromebook. The Samsung V2 does well enough for general use with a few Chrome tabs, some Android apps, and extensions. When I'm deep into work, I might end up with 20-ish tabs, and that's too much for this Chromebook to handle gracefully. Bringing up different apps and windows takes a beat longer than it should, and tabs are slow to refresh. The experience would have been immensely improved with 8GB of RAM.

The Speedometer 2.0 test bears this out. The Chromebook scores just 17.5 (runs per minute) on a test of web app speed. It starts in the mid-20s, but each run gets slower until you end up with the 17.5 average (incognito mode, logged into Chrome OS). The Geekbench synthetic benchmark hits 2157 single-core and 3613 multi-core, both much lower than other Chromebooks in this price range. 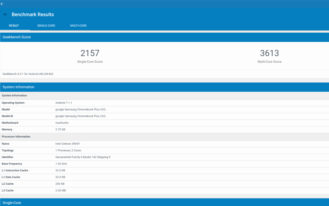 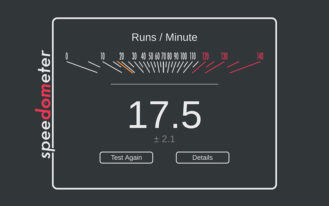 Samsung claims 8 hours of usage per charge of the 39Wh battery. I didn't get quite that much, but I was perfectly happy with the consistent 7 hours and change. I do use the Chromebook V2 mostly indoors with subdued lighting, so I don't need to turn the brightness up too high. If you crank the LCD above 50%, the battery life will suffer. Heavy use of LTE will also drain the battery, but I didn't see much difference between WiFi and LTE during normal usage. 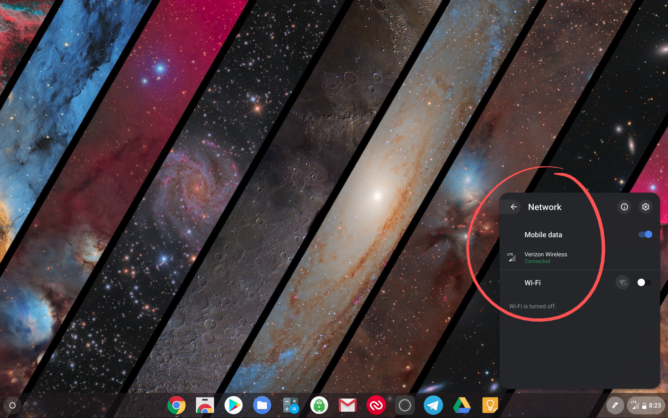 LTE performance will depend on how good your Verizon coverage is—mine is middling. In my testing, the Chromebook V2 LTE manages about 12Mbps down and 5Mbps up. That's usable for all general computing tasks, but large file downloads might be a bit more pokey than you'd like. The Chromebook seems about 20% slower than a Verizon LTE phone in my area, but I'm not sure why.

Probably not. While the Chromebook Plus V2 LTE excels in some ways, it's too expensive for what it offers. The display is gorgeous, and the laptop itself is attractive in an understated way. The 360-degree hinge is useful, and I appreciate the inclusion of a second webcam that lets you snap photos in tablet mode. Type-C charging is a must for any high-quality modern laptop, and the Chromebook V2 checks that box.

You should only consider buying the Chromebook Plus V2 LTE if you absolutely need integrated LTE. I'm not sure very many people do, though.

The LTE integration is nice to have—it's undeniably easier to get down to business when you don't have to find a usable WiFi network or configure your phone's hotspot every time. However, the added cost might not be worth it. At $600, the Chromebook Plus V2 LTE doesn't perform as well as similarly priced devices. It's acceptable for lighter work, but it lags when you load it down with tabs and apps. 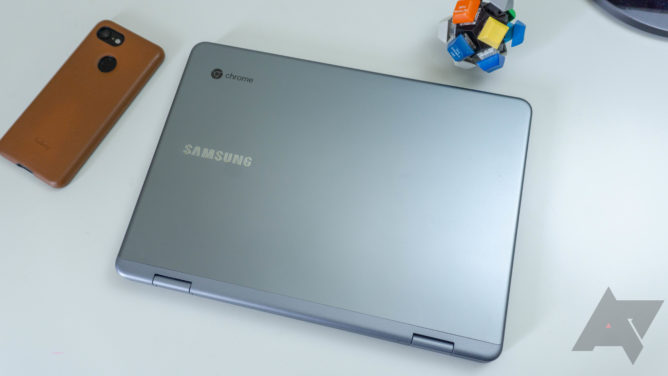 You should only consider buying the Chromebook Plus V2 LTE if you absolutely need integrated LTE. I'm not sure very many people do, though. Most of us are paying an arm and a leg for a mobile plan that has tethering of some sort included. You have to pay for another line of service on the Chromebook to make use of its LTE, and is that worth it to save the 20 seconds it would take you to set up a mobile hotspot?

You need a Chromebook with integrated LTE.

You don't mind using WiFi or a phone hotspot, and you want the best value for your Chromebook dollar.

13 new and notable Android apps and live wallpapers from the last week including Memoria, ...