Forget everything you've read about app stores bringing in billions upon billions of dollars a year. For all the growth this market has seen, for all the apps that have become runaway success stories — does any of it really matter when four sisters with a dream can't find a way to keep their personal apps going? That thought's been running through our head this week after getting word that Kim Kardashian, Khloe Kardashian, Kourtney Kardashian, and Kylie Jenner are all shutting their apps down.

This is going to be tough on all of us, but none more so than these sisters who wanted nothing more out of life than to develop a deep, personal connection to their fans through the release of subscription apps.

For about $3 a month, Kim, Khloe, Kourtney, and Kylie would share exclusive photos, video, news, and advice with their loyal fans. Actually, we keep using that word, but it's all wrong — paid subscribers of these apps were more like close friends to the Kardashian girls than anything so pedestrian as "fans."

The sisters announced plans earlier this week to cease updating their apps (and associated subscription websites) in 2019. But on Android it looks like they got the ball rolling a little early, as each of their personal apps was unpublished from the Play Store just over a month ago.

If you need to take a minute to compose yourself, we understand.

In a bit of a silver lining, while this Kardashian subscription-app project is folding, the girls' other apps live on, including the indomitable Kim Kardashian: Hollywood. Playing that's not going to make the sting of this loss any less poignant, but we have to find distractions where we can. Remember: We're all in this together. 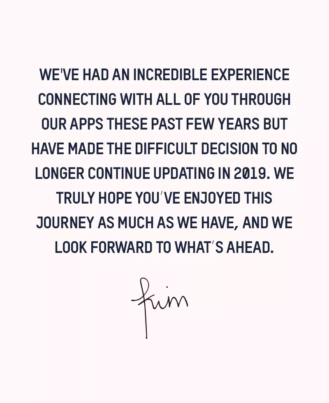 Memoria is a new, gorgeous, and smooth photo gallery app 23 temporarily free and 89 on-sale apps and games for Friday, including titles from Square Enix ...