The age of wires is over, but true wireless earbuds are expensive. One of the better sets of earbuds is slightly cheaper today, though. Samsung's Gear IconX (2018) launched at $200 before coming down a bit over time. Today, they're on sale for $124.95-129.99, the lowest we've ever seen them.

The IconX are "fitness-oriented" earbuds with integrated heart rate and step counting, but they're perfectly capable for non-exercise usage, too. They're lightweight and stay put in your ear, and the sound quality is solid despite the lack of AptX. They also have touch-sensitive controls that are easy to use even while running. The charging case also has a Type-C port, a rarity for Bluetooth earbuds.

You can get the IconX at the reduced price via either Amazon or B&H. Amazon has all three colors in stock for $129.99. That's $70 off MSRP and about $50 lower than recent sale prices. B&H doesn't have them in stock at the moment, but the price is $5 lower (just black and pink colors). If you can wait another 7-14 days, that will save you a little more.

Got a Costco membership? Or do you have access to an amenable friend with a Costco membership of their own? Either way, you can save a further $10 on the Samsung Gear IconX, which the retailer has now for right around $120. That deal's only good through December 22, though, so act fast if you're hoping to pick this up. 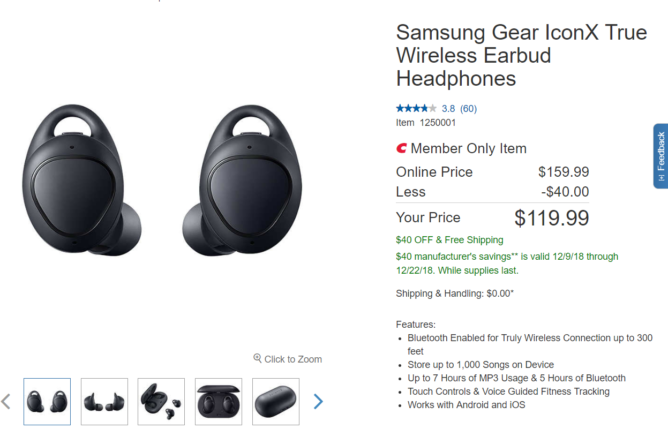