For reasons unknown to me, most Chromebooks larger than 13 inches usually have extremely low-end hardware. The 14-inch Asus Chromebook C423 has a dreadful Intel Celeron N3350 processor, and the Acer Chromebook 15 has a slightly better Pentium N4200 CPU. If you've been waiting for a big Chromebook with decent hardware, Dell might have the laptop for you.

The 'Inspiron Chromebook 14 2-in-1' is pricier than most other large Chrome OS laptops, with an MSRP of $599, but it also has the hardware to justify that price — a latest-gen Intel Core i3 processor, a 14-inch 1080p IPS screen, 4GB of memory, and a backlit keyboard.

Overall, the Inspiron Chromebook 14 is a great laptop, as long as you're okay with the extra heft. 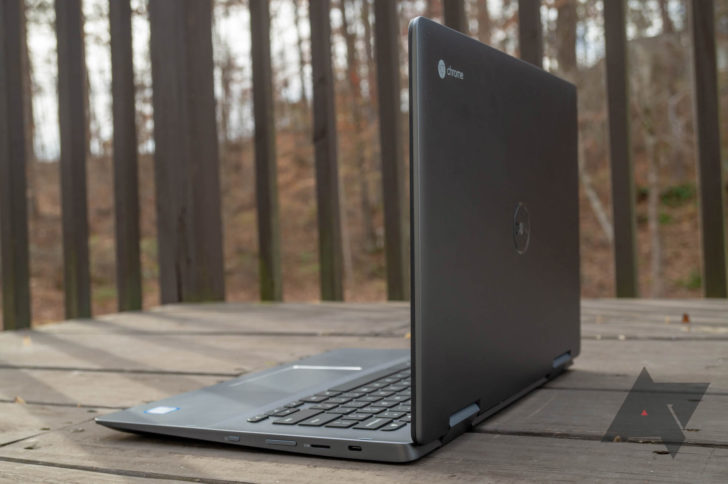 That being said, the Inspiron feels very well-built. Brushed aluminum covers the entire exterior, the display hinge doesn't creak, and there is very little display flex. The build quality of Dell laptops is usually very good, and the Inspiron Chromebook is no exception to that. My only design complaint is that the speakers are still on the bottom — there's definitely room for those next to the keyboard. 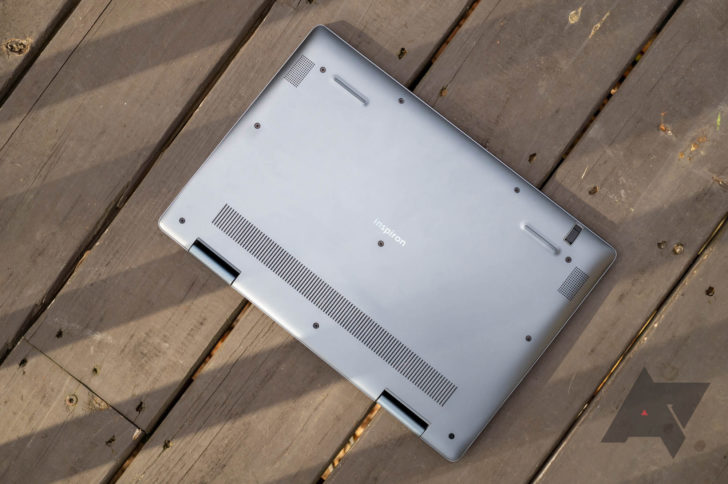 The internal hardware is decent as well. The processor is a latest-generation Intel Core i3-8130U, which has two hyperthreaded cores (four CPU threads total) and a boost clock of 3.40GHz. I would have preferred a Core i5 CPU at this price, but in all honestly, a modern Core i3 is more than enough for Chrome OS. Paired with that processor is 4GB of RAM, which again is fine, but I would have liked to see 8GB.

Other specifications include 128GB of eMMC storage, Intel HD 620 integrated graphics, 2x2 802.11ac Wi-Fi, and an unspecified version of Bluetooth. For connectivity, you get two USB 3.0 Type-C ports (either can be used for charging the laptop), one USB 3.0 Type-A connector, a microSD card slot, and a headphone/microphone combo jack. 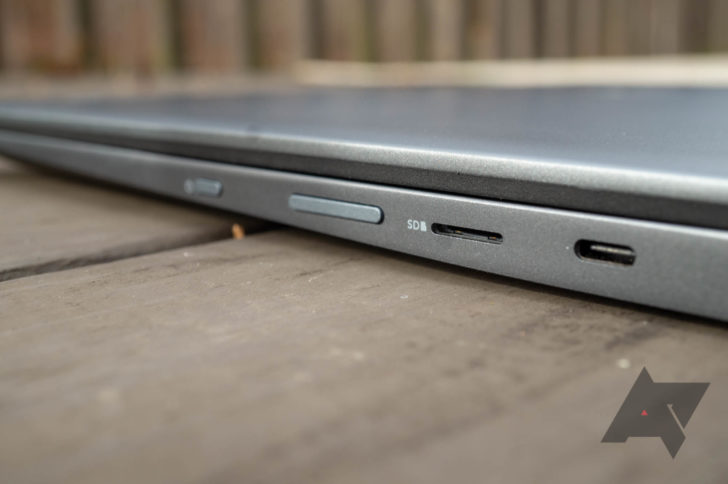 The keyboard on the Dell Inspiron is very similar to the keyboard on other Dell laptops I've tried. The key presses are a little soft, with a decent amount of key travel. Since this is a 14-inch laptop, the keyboard is fairly large. It's also backlit. 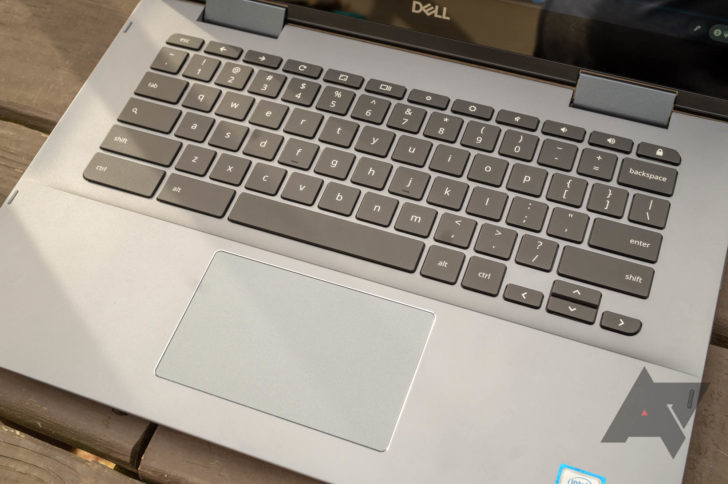 I don't have much to say about the touchpad — I feel like it could have been a bit larger, but it's still perfectly usable. Multi-finger gestures work fine, and the click doesn't feel cheap.

The large 14-inch display is the main selling point of this laptop. It has a resolution of 1920 x 1080, and uses an IPS "TrueLife" LED panel. Dell says the screen covers 72% of the AdobeRGB color space and can reach a brightness of 270 nits. I don't have the equipment to verify that, but I can tell that the screen is bright and vivid. The bezels around the display could be a little smaller, but that's nitpicking. 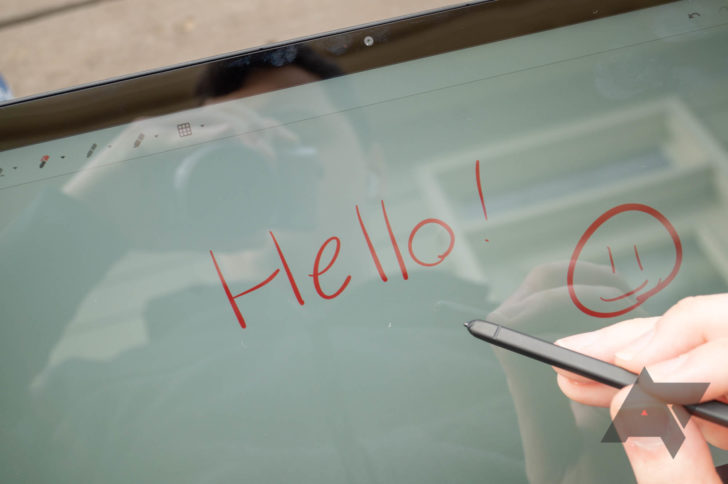 The screen also supports input from any standard standard Electromagnetic Resonance (EMR) stylus. There's one built into the bottom of the Chromebook, which automatically opens the Chrome OS pen options when you take it out. I didn't have any problems with pen tracking. 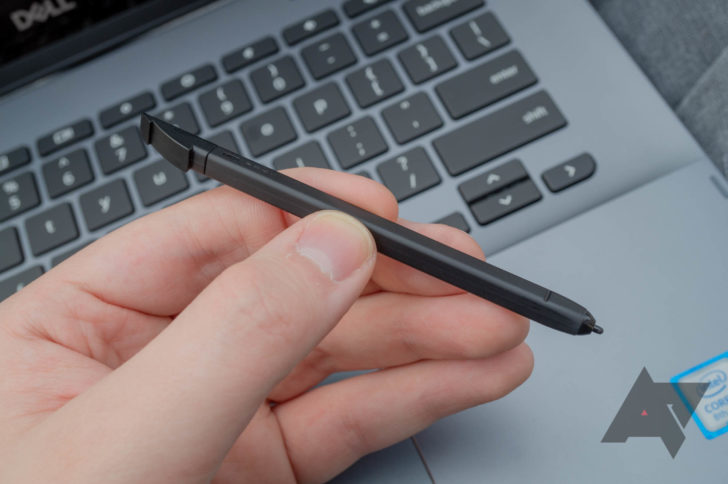 As I mentioned earlier, the Core i3 processor in the Inspiron Chromebook is more than enough for Chrome OS. I had no problems managing my usual workload of 5-15 Chrome tabs and a handful of Android applications. When you take an operating system designed to run on low-power Intel/ARM processors, and put it on a computer with a 15W modern CPU, performance is excellent. 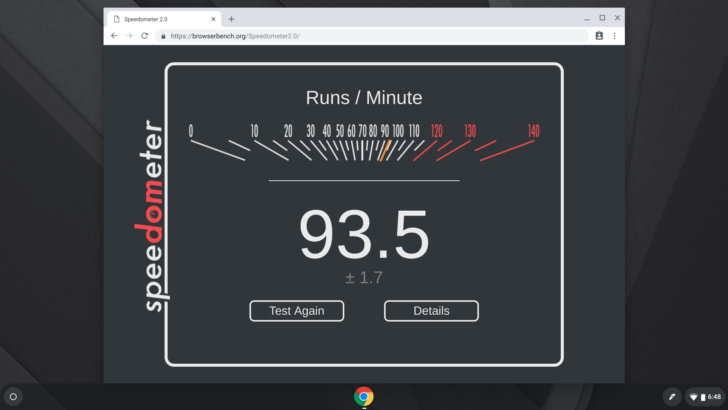 If you're interested in benchmarks, the laptop scored 93.5 on Speedometer 2.0. For comparison, the Asus Chromebook Flip C302 gets a score of 65.51, and the Core i5 Pixel Slate earns a rating of 81.3. On Geekbench 4 for Android, the Inspiron gets 4505 on single-core CPU performance and 9076 on dual-core (full results here). 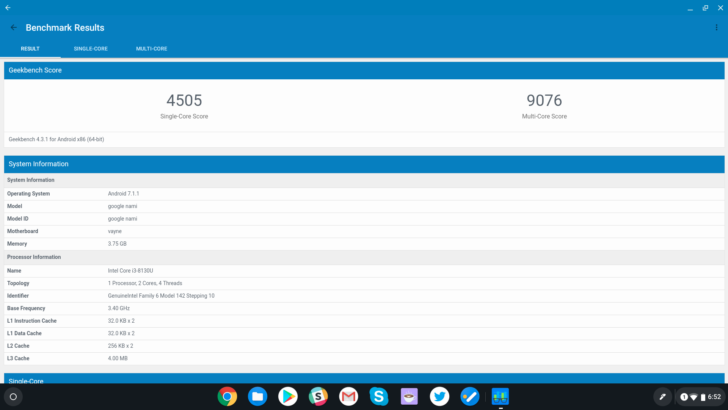 As for battery life, I was getting around 8-9 hours of battery life at half-brightness, with around 5-15 tabs open at all times. That's well below Dell's claim of "up to 15 hours," but it's still perfectly acceptable in my book — especially considering the battery is powering a 15W Intel processor and not a dinky Atom or ARM chip. As always, battery life can vary significantly based on what you are doing.

Yes, if you need a big Chromebook. The Dell Inspiron 14 is one of the few Chromebooks on the market with a large screen and great internal hardware. There are a few similar laptops, like the 14-inch HP 2-in-1 and the Lenovo Yoga C630, but they have their own advantages and disadvantages. The HP is cheaper (as of the time of writing), but it lacks pen support. 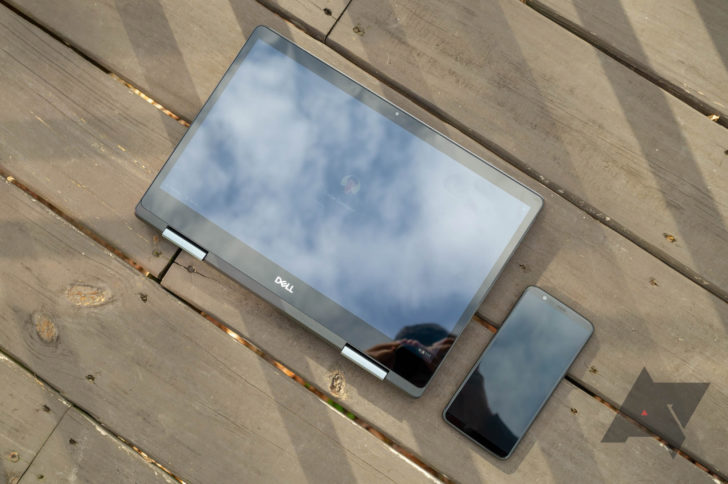 Inspiron Chromebook 14 next to the OnePlus 5T

You can still get more bang for your buck from 13-inch Chromebooks (like the Asus Flip C302 and Lenovo Yoga Chromebook), but if you want a larger Chrome OS laptop that can handle everything you throw at it, the Inspiron 14 is a solid option.

The Inspiron Chromebook 14 can be purchased from Dell's website and Best Buy for $599.99. 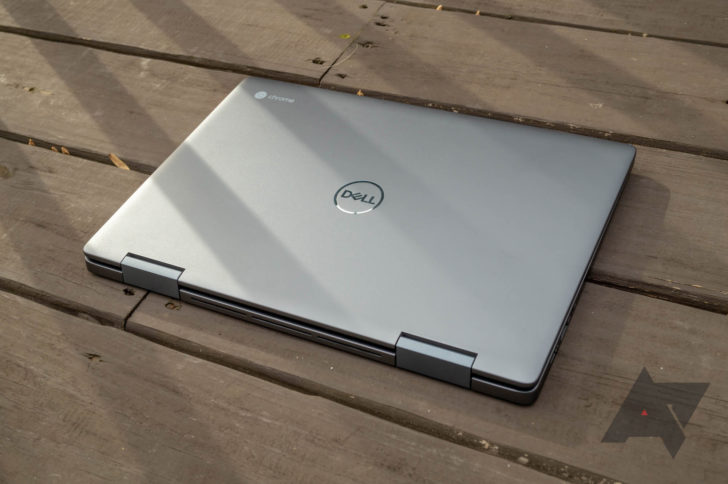 Android Messages can now send calendar files, in case you ever want to do that

30 new and notable Android apps and live wallpapers from the last two weeks including ...