Ring was basically the first entrant in the smart doorbell market, and given that the company was purchased by Amazon for a reported $1 billion earlier in the year, it's clearly pretty good at making them. Ring's flagship smart doorbell, the Video Doorbell Pro, is now available for just $179.99 with a Ring Chime Pro and an Amazon Echo Dot at Best Buy.

The Video Doorbell Pro allows you to view and even speak with whoever is at your door without getting up from your desk in 1080p video. Alerts are sent whenever the doorbell detects someone, and it has custom motion zones and IR-based night vision. The Chime Pro acts as both a Wi-Fi extender and a speaker for the Video Doorbell Pro, which is pretty neat. The Echo Dot can also be used for a doorbell speaker, though it obviously has other uses as well. 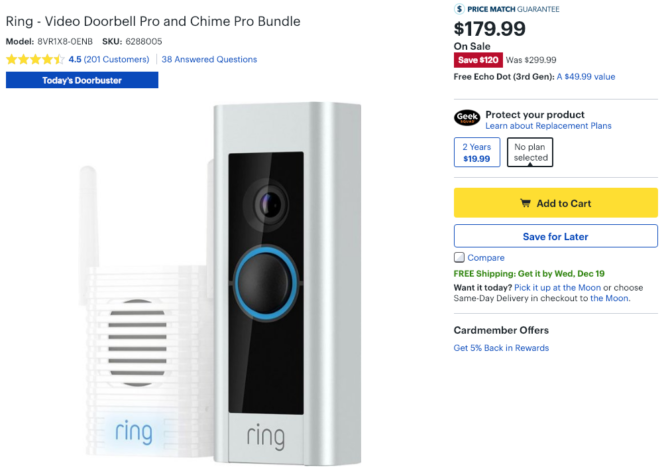 Given that the Video Doorbell Pro on its own can't even be found for as low as $179.99 at other retailers, Best Buy's bundle with the $49 Chime Pro and $30 Echo Dot is a screaming deal. Shipping is free, and in-store pickup is also available. We wouldn't be surprised if this sold out quickly, so head over to Best Buy via the link below if you're interested.

The 2-year-old Samsung Galaxy Tab A is being updated to Android 8.1 Oreo

Select items on Google Express are 15% off for today only