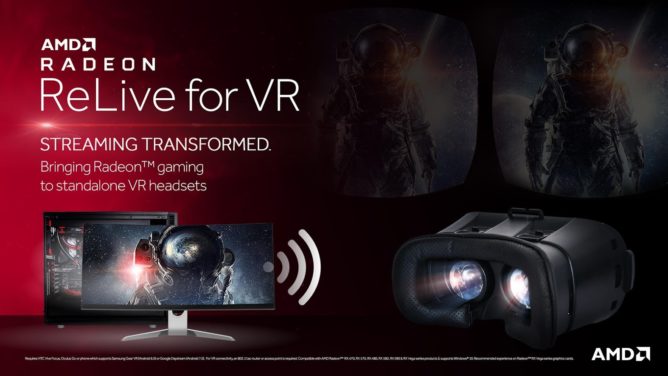 Thanks to some low latency wizardry on AMD's part, you can actually stream your SteamVR games at a 1440x1440p resolution to a Daydream standalone VR headset. An AMD Radeon GPU is necessary. So far the RX 470, RX 570, RX 480, RX 580, RX 590, and RX Vega series cards are supported.

To get this all running, you will need to install AMD's Radeon Software, along with Steam and SteamVR. You'll first have to turn on remote play in your PC's Radeon Software by enabling Radeon Relive VR in your Game & VR Streaming tab. Once this is set up, you can start your SteamVR app on your PC. You'll also need to install the Radeon ReLive for VR Android app to your Daydream standalone VR headset. Once you ensure the Daydream device is connected to the same router as your PC, you should find the PC running SteamVR listed in your Radeon ReLive for VR app, and a connection should happen automatically. Then it's off to the races.

Like most video game streaming apps, performance hinges on the speed of your internet connection. To ensure the least amount of latency while streaming it's recommended that you connect your PC to a 5GHz wifi signal, or use an ethernet cable. It's also recommended that you connect your Daydream standalone VR headset to a 5GHz wifi signal. This way latency will be less of an issue over using something like a 2.4GHz connection.

AMD tends to have a reputation for GPUs that run hot and use a lot of power. Many believe they don't really compete with Nvidia, but often AMD cards can be had for much lower prices than its competitor, which tends to even out the power consumption criticism. One thing is for sure, AMD offers a lot of options when you use one of its GPUs. The recent update to AMD's Radeon Software brings a lot of nifty features for PC users, and the addition of VR game streaming to Daydream standalone VR headsets through the newly released Radeon ReLive for VR Android app is something I think every gamer can appreciate. Say what you will about the current state of virtual reality games and game streaming services, it's nice to see companies like AMD moving the tech forward. The OnePlus 6T McLaren Edition is available today for $699