Lime offers bikes and electric scooters for rental, but they can drift around a city as people take them from point A to B. Via the Lime app, you can locate and unlock your preferred two-wheeled conveyance, and then use it to get where you're going. It only costs a few bucks, substantially less than your average Uber or Lyft. 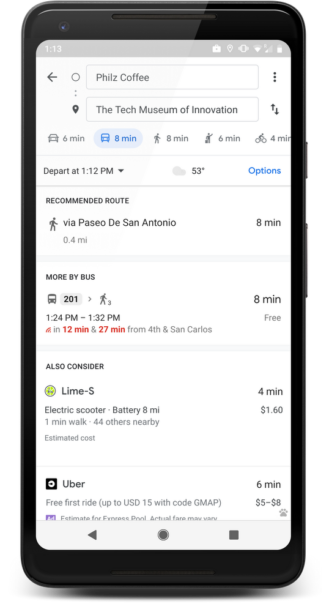 The Google Maps integration doesn't change any of that—you still need to use the Lime app to rent the bike. However, Lime will appear as a Maps transit option in 13 cities: Auckland, Austin, Baltimore, Brisbane (AU), Dallas, Indianapolis, Los Angeles, San Diego, Oakland, San Antonio, San Jose, Scottsdale, and Seattle. The app shows you where a Lime vehicle is available, how long it'll take to walk there, and about how much it will cost. Maps also opens the Lime app for you. More cities will get Lime support in the future, too.