As far as smartwatches go, Samsung is still one of the best options to go with. Though the Galaxy Watch is new kid on the block, its predecessor the Gear S3 is still a very competent, and downright good, wearable. And you can pick up the Frontier version for just $199.99 over on B&H, a nice $100 off.

The Frontier is the sportier version, with Classic being the more "refined." That's not to say that the Frontier looks bad — quite the opposite, really. It features a great 1.3" 360x360 AMOLED display, the utterly fantastic rotating bezel, 4GB of onboard storage, and access to the Galaxy Apps store. You also get Samsung Pay (with full MST support). Bear in mind that this is the Wi-Fi only model, not the LTE one. 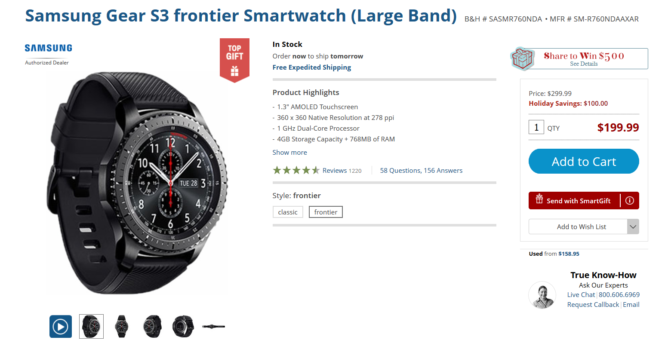 I own the Classic and it's still my daily driver. Though the rotating bezel doesn't slide quite as easily as it used to, I still love the watch. Battery life remains superb, too. If you're looking for a solid smartwatch, but don't want to drop a lot of money, this is a good option to consider.

Also, while we're on the topic, B&H also has the new Galaxy Watch in black, rose gold, and silver for $279.99, $50 off the original asking price. If you have a bit more to spend, that's worth keeping in mind, too.