OnePlus is something of a Cinderella story in the smartphone world. It seemed to appear out of nowhere, releasing a phone with numbers that matched the best the likes of Samsung and HTC had to offer - and did it at half the price. The OnePlus One went viral in a way few products do, and the rest is history (well, as much as four years can be “history”). OnePlus just keeps improving on that formula, most recently with the excellent OnePlus 6T, which I’ve had a chance to use for the last few weeks. And it really is a great phone - we even gave it our ‘Phone of the Year’ award. But what if I told you there was another phone that was almost physically identical to the 6T, with a crazy blue and purple color scheme, and that it’s sold in China by a company called Oppo?

That phone is the R17 Pro, and it’s the latest incarnation of what has become an open secret among smartphone enthusiasts: that OnePlus phones aren’t just OnePlus phones, they’re re-engineered Oppo phones. It’s a topic that I think fans of the brand are as curious to know more about as I was, and given the chance to try the R17 (as in, Oppo reached out to me and asked if I wanted to), I jumped at the opportunity. In that time, I started to piece together a story - one of two companies with vastly different approaches and strategies, but clearly joined at the hip by a mysterious business relationship. 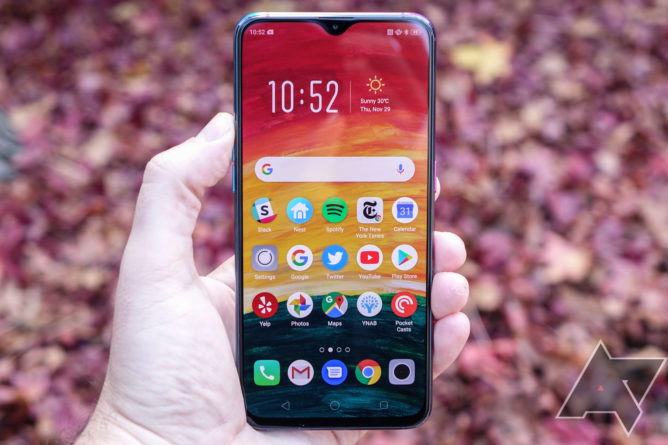 A Chinese smartphone success story - but one that doesn't translate well

Oppo was one of China’s very first smartphone manufacturers, and it enjoys immense popularity in the country today, ranking second in device sales behind its value-focused sister brand Vivo. Its Color OS software - which on my R17 Pro is of the global ROM flavor, intended for markets like India - is extremely bright and bold, and offers an experience more aesthetically reminiscent of iOS than the Android 8.1 platform it’s based on. I don’t mind the look (it’s pretty normal in China), and though it’s not my cup of tea, neither is TouchWiz. I even think their launcher isn’t half bad.

The R17 Pro is positioned near the top of Oppo’s larger range of products, and it’s sold throughout Southeast Asia, most recently launching in India. But given its Snapdragon 710 processor (compared to the 6T’s 845), you’d think it would be a little downmarket from the OnePlus - and you’d be wrong. The colorful R17 Pro actually costs the equivalent of $100 more than the 6T, even in Oppo’s home market of China (and yes, with the same RAM and storage configuration). To any outside observer, there’s no immediately clear reason why that’s the case.  And the more I used the phone and the more I studied it, the more confused I became: there’s nothing about the R17 Pro that makes it obviously more valuable than the OnePlus 6T it’s so closely related to. (For the curious: SuperVOOC 50W charging, a tertiary camera for stereo 3D, and a 25MP selfie cam versus the OP6T’s 16MP are the major “upgrades,” but there’s no way they add up to the $100+ difference.) 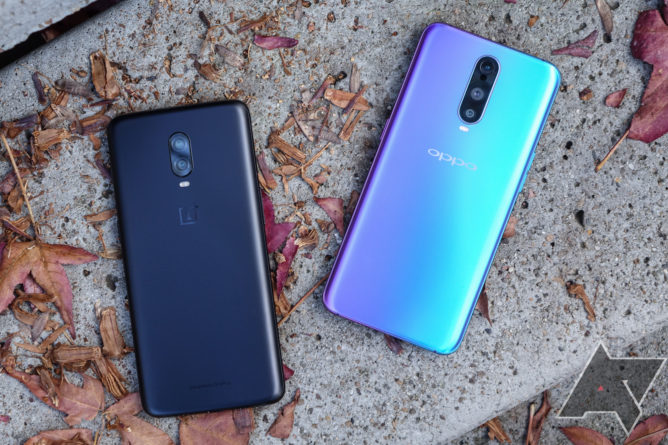 With its cheaper processor, we all know this phone should cost less if you’re a typical consumer applying typical consumer tech product pricing logic. And aside from the software, it really is very similar to the OnePlus phone, down to the RAM, battery, and basic industrial design. Nobody would be able to tell these phones apart if they came in similar colors - they’re almost physically identical. So, what it’s like to actually use? I think I can best sum it up as follows: I’m at a total loss as to why anyone would choose the Oppo over the OnePlus, even if it were the same price, or cheaper. Oppo’s Color OS software is frustratingly broken in ways that I’d expect of a Chinese smartphone five or six years ago. But in 2018, and from a company that sells its devices with Google services in a place like India, where the R17 Pro just went on sale? It’s bizarre - like Oppo has learned nothing from OnePlus at all.

Any time an app requests SMS permission and the phone realizes I’m not using the stock SMS app, the status bar flashes red, and I get a popup notification yelling at me that my security could be compromised.

That’s probably because the R17 Pro is a phone designed for Chinese consumers, and the global version seems to be that same Chinese software experience with Google’s apps slapped on top. Oppo also doesn’t really seem to get that a lot of core Android functionality is important to people. For example: switching the stock SMS app on the phone causes Color OS to freak the hell out. Any time an app requests SMS permission and the phone realizes I’m not using the stock SMS app, the status bar flashes red, and I get a popup notification yelling at me that my security could be compromised. Sometimes this actually prevents me from logging into apps, like PayPal, entirely. I searched repeatedly for a way to disable this security functionality, and nothing I tried worked. Presumably, this is because SMS hijacking is a major problem in China, but for those of us in places where it’s not an issue, this kind of aggressive software behavior is as draconian as it is pointless. 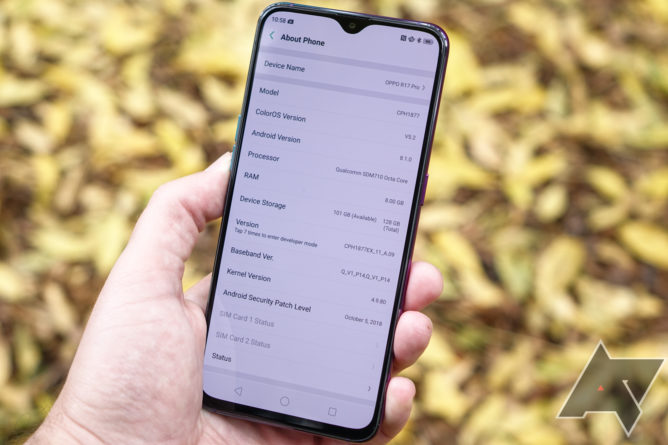 Oppo's biggest liability, should it come to the West, is almost certainly its software.

And I’m honestly not completely sure why Oppo is trying to engage Western media on this launch - nobody is going to have a good experience with this phone given all of the completely arbitrary changes that have been made to Android. Want notifications on the lockscreen or in the status bar? Good luck! Don’t want Oppo’s weird “privacy keyboard” with its extremely unintuitive capitalization and special character entry to pop up every time you need to enter a password? Time to fish through settings for five minutes to figure out how to disable it. After installing a third party SMS app (Google Messages), the phone practically went into a permission spam frenzy, and I didn’t notice until hours later that none of my texts were going through because somehow the “send SMS” permission was never given to the app. Fingerprint authentication basically doesn’t work for any of my apps that use it (banking, airline, stocks), and every time I get in the car - no matter what - the stock music player app autoplays the Oppo corporate theme song. It’s great!

There are other annoyances and oddities I’ve had to deal with that I won’t get into here. And after 10 days, going back to the OnePlus 6T was sweet relief. I don’t think that it can be emphasized enough just how important software has become to the smartphone user experience. You can stuff all the right parts in a phone, but bad software can easily sour the whole product. I have no doubt that what Oppo does works for China and makes sense there, but it seriously doesn’t here. 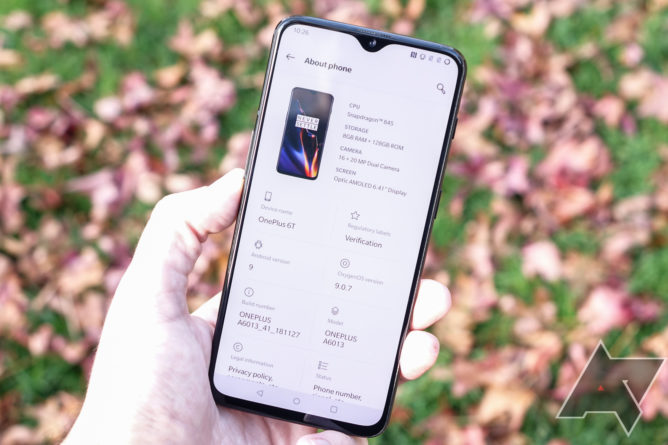 Maybe not a friendly competition

So, at this point, you might very understandably suggest that OnePlus should keep handling the non-Chinese business, given they’ve been so successful in India, Europe, and the US. After all, OnePlus clearly understands how to develop a software experience - Oxygen OS really is the most well-balanced interpretation of Android as “skins” go, and other companies could learn a lot from its approach. And if Oppo and OnePlus are just branches of one larger tree, doesn’t it make sense to let one flourish where the other would founder? It certainly would - if either were actually interested in seeing the other succeed. But I don’t think they are. And that’s why I’m going to ask you to take a leap with me here on something I think I’ve figured out: OnePlus isn’t some benign offshoot of a larger company - it’s Oppo’s young, upstart rival.

Despite the fact that the two share a huge amount of technology and resources, all other signs actually point to them being competitors. Both sell products in a rapidly saturating and extremely competitive market, and OnePlus actively undercuts the pricing of Oppo’s products. The most telling evidence, to me, is that OnePlus does this in China (it even uses a China-only ROM, Hydrogen OS), an investment that would make no sense if Oppo and OnePlus were working toward the same end goal. It’s only logical if this relationship is interpreted through a lens in which the two are competitors, not partners. 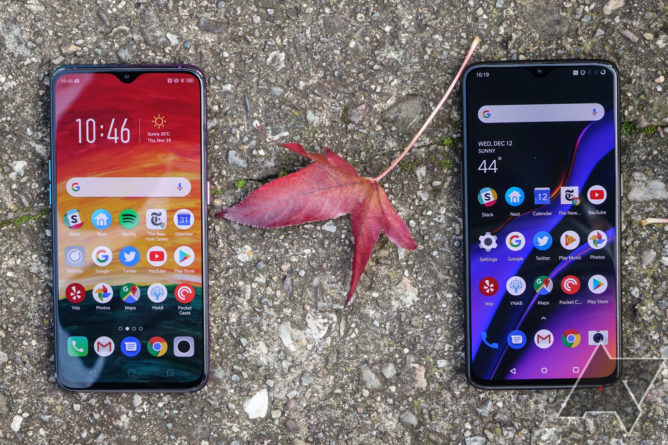 Oppo and OnePlus make a lot more sense when you think of them keeping one another at arm's length.

Analogs to this kind of competitive symbiosis exist in other industries. The best-known one is that of Kia and Hyundai, two Korean carmakers that are actually owned by the same parent group. Kia and Hyundai share lots of technology - R&D, platforms, and supply chains. But not every aspect of every one of those things is shared. And Hyundai and Kia operate in many of the same markets with extremely similar products at extremely similar price points. That is to say, when Kia wins, Hyundai almost by necessity loses. It’s sort of like a giant corporate A/B test: let two concepts fight it out, use that competitiveness to spur innovation, and share resources to reduce overhead where it makes sense.

While the OnePlus 6T is very similar to the R17 Pro in many ways, using them couldn’t be more different.

We obviously don’t know the full story of the relationship between OnePlus and Oppo, and we probably won’t any time soon. But Oppo has ambitions to expand outside of China into markets where OnePlus has established footholds, like India, and it’s acting on them. That by necessity puts competitive pressure on OnePlus. The R17 Pro is priced close enough to the 6T that they’re clearly after the same customers - and that means if Oppo succeeds in a given market, OnePlus’ opportunities in that market will be diminished. Given Oppo’s far greater financial, technical, and marketing resources (Oppo sponsors FC Barcelona - that's not cheap), this has to have OnePlus at least a little nervous.

For now, though, I don’t think OnePlus has a lot to worry about. Oppo pretty clearly suffers from the same issues many large Chinese companies do when expanding globally, believing that their domestic strategy will easily translate to an eagerly awaiting international audience. But that’s rarely the case - and it’s a road littered with corpses. OnePlus, by contrast, was born of a product and marketing approach that is fundamentally global in its philosophy, and while the OnePlus 6T is very similar to the R17 Pro in many ways, using them couldn’t be more different. Now I think I understand why.

This all leads me to wonder just how long OnePlus plans to remain beholden to its Shenzhen engineering overlords. As Oppo tries to grow beyond its domestic stronghold, OnePlus will face increasing pressure to differentiate. I think it’s obvious how it’d go about doing that: a OnePlus phone designed and developed in house isn’t a matter of if, but when. Today, the R17 Pro is hard to recommend, but at some point Oppo will learn from its mistakes - which are far from unfixable - and when that day comes, OnePlus needs to be ready. 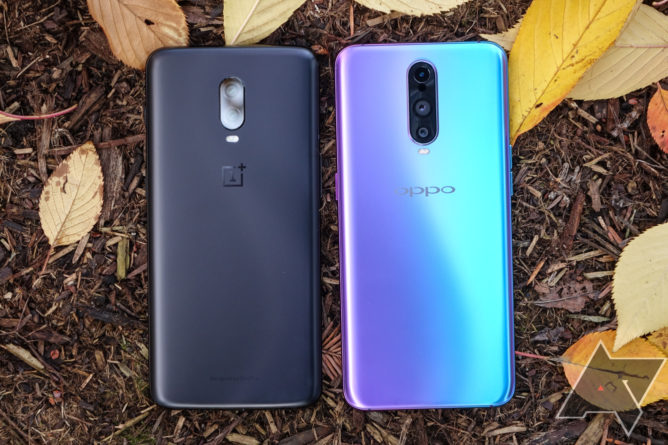