Sometimes a phone makes it all the way to release without so much as a tiny leak, but the OnePlus 6T McLaren Edition is definitely not one of those. We've seen images of the supposed new 6T variant pop up in the last week or two, and they were dead-on. The OnePlus 6T McLaren Edition includes more RAM, a faster charger, and a fancy orange stripe. It's a racecar phone, but the design is perplexingly subtle and similar to existing 6T variants. It'll also cost you more than other OnePlus phones at $699. Still, it's the "best" version of the 6T you can get.

McLaren is a big name in the automotive industry, particularly in Formula 1 racing. Throughout its history, McLaren has used a particular shade of "Papaya Spark orange" in its livery. I would have been floored if the 6T was just Papaya Orange, but alas, the company went for a more understated tie-in. The orange accent sits at the very edge of the glossy glass back, fading in about a third of the way down the phone and wrapping around the bottom before facing away again on the other side. The orange is highly visible if you look at the phone from an angle, but straight down it's barely noticeable. There's also a "McLaren" badge toward the bottom of the glass back. The front is identical to the normal 6T phones. 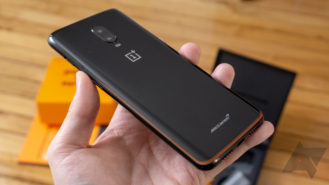 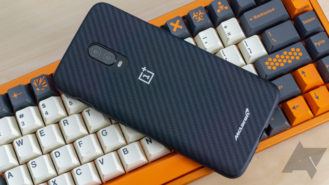 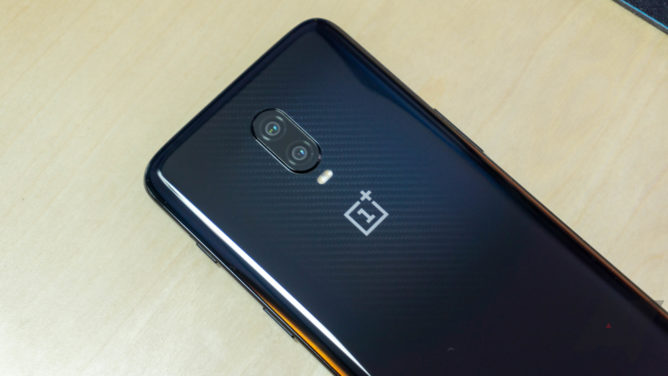 The only other exterior change is even more subtle than the orange stripe. There's a faint carbon fiber pattern hiding under the glass back, but only toward the middle of the phone. It fades in and is only visible from certain angles. I had to shine a bright light on the phone to get a good photo of the pattern (above).

There's nothing wrong with the McLaren Edition 6T, but I will admit to being a little underwhelmed by the design. McLaren just switched to a classic orange and blue livery in 2018, so using the orange and black theme from last year was an odd choice. Imagine this phone with a Papaya orange back and a blue stripe down the middle. Mmmmm. 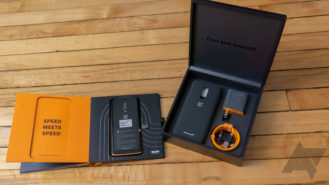 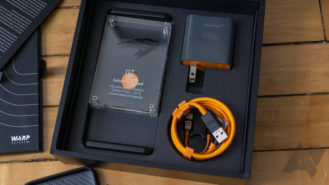 The phone comes in a very fancy box, if you're into that sort of thing. You get the official "carbon fiber" 6T case bundled with the phone, but this one has the Mclaren logo on it. Under the case is a small acrylic block with a bit of real Mclaren carbon fiber inside. I don't know if this is something that excites people, but it's in there either way. The device is tucked inside a small book of McLaren and OnePlus history, which is kind of clever. Finally, there's the orange charger and headphone adapter. On the software side, there's an augmented reality app on the phone that adds more photos and videos to the included book when you look at it through the viewfinder. The default system theme is black and orange to match the exterior, but you can change that. OnePlus also came up with a new McLaren-exclusive fingerprint unlock animation; I don't personally like it (see below).

The snazzy orange charger isn't just a regular OnePlus charger with a new theme—it's the company's first Warp Charge 30 adapter. You might recall the Warp Charge name appeared some months ago. Well, now it's official. As the name implies, the new charger tops out at 30W. That's 5V and 6A, and yes, it's still proprietary. The braided nylon cable is a nice touch, though. Aside from the charging, the only spec change is the move to 10GB of RAM. The phone also has 256GB of storage like the top-tier regular 6T. 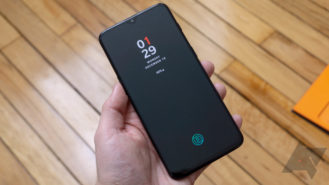 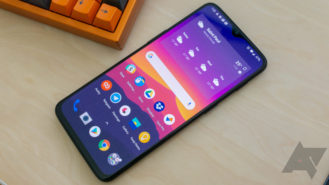 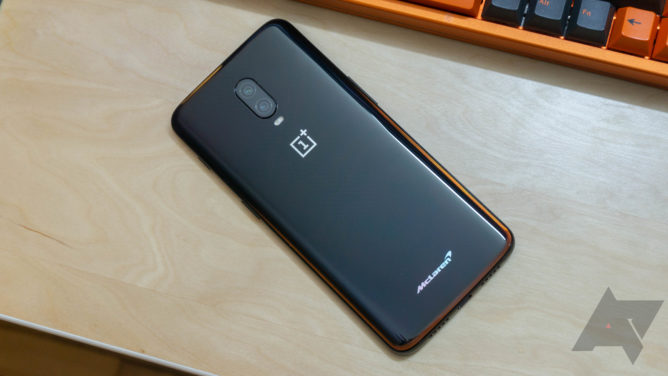 OnePlus will charge $699 ($929 CAD) for the McLaren Edition phone, which is $70 more than the standard 8/256GB variant. So, you're paying more to get the extra 2GB of RAM, the faster charger, and the bundled case. That's not a bad deal if you actually want those things. The OnePlus 6T McLaren Edition launches December 13th in North America and parts of Europe. More markets will follow later.

“The OnePlus 6T McLaren Edition is stunning. Engineered with exact precision and new technology we’ve never used before, it’s our fastest, most cutting-edge device ever - the epitome of craftsmanship” said OnePlus CEO Pete Lau. “It’s the start of an exciting partnership with McLaren, giving people a feeling of incredible speed and performance.”

Speed meets speed
The OnePlus 6T McLaren edition is a combination of speed, technology, and beauty. Inspired by the desire to constantly challenge existing standards, OnePlus and McLaren have introduced intricate design with a powerful and versatile experience.

Unmatched speed is at the heart of the OnePlus 6T McLaren Edition, with new technology including Warp Charge 30, OnePlus’ new charging standard. Warp Charge 30 takes fast charging to new heights and never leaves people wanting, offering a day’s power in just 20 minutes. Thanks to new Integrated Circuits in both the charger and the phone, as well as finely tuned power management software, 30 watts of power flow to the handset without slowing down even when the device is being used, or generating excessive heat.

A powerhouse of multitasking, whether it’s high-end gaming, filming in 4K at 60 fps, photo-editing on the move or rapidly switching between apps the OnePlus 6T McLaren Edition doesn’t slow down, because it features a colossal 10 GB of RAM.

Designed for speed
The signature McLaren color, Papaya Orange races around the bottom edge of the device before fading into the black. The pattern underneath the glass back of the phone is based on McLaren’s groundbreaking carbon fiber, the technology at the heart of all McLaren cars since 1981 when it was introduced to the Formula 1 car design, before being integrated into McLaren road cars in 1993. While light streaks across the McLaren logo, illuminating and disappearing in an instant. The Warp Charge 30 power unit includes a Papaya Orange braided cord cable.

OnePlus and McLaren have taken the unboxing experience to a new level. Encassed in the box is McLaren’s logo, the iconic Speedmark, recreated in McLaren-designed F1 AA grade carbon fiber – the same material used in the McLaren MCL33 2018 Formula 1 car. Over six F1 cars’ worth of carbon fiber were used in the production of the Speedmarks.

With the device comes a book celebrating the history of both companies, and on the OnePlus 6T McLaren edition, people can enjoy the exclusive software animations, tuned to McLaren’s unique style and history.

“The OnePlus 6T McLaren Edition is a special collaboration between McLaren and OnePlus,” said Zak Brown, CEO, McLaren Racing. “The end product is a device that brings performance never seen before. Our thanks to our OnePlus partners for capturing our spirit accurately and bringing unmatched power and speed in the new flagship device.”

The device will be available in Western Europe and North America December 13, with availability in India, China and the Nordics soon after. The OnePlus 6T McLaren edition is available for $699 USD and $929 CAD.

Google Maps tests directions screen with refreshed Material Design, rolls out For You tab to ...