The Snapdragon 855 was fully revealed yesterday, but rumors that Qualcomm was holding back something even more powerful were just confirmed during a keynote presentation at the company’s tech summit event here in Hawaii. Snapdragon 8cx is its name, and it’s not the superpowered heart of your next smartphone - but it could be in your next laptop.

Core to the 8cx is Snapdragon on Windows, a multi-year initiative between Microsoft and Qualcomm to optimize Windows for ARM processors. While the first round of products wasn’t especially well-reviewed, it doesn’t seem like that partnership is slowing down. Snapdragon 8cx is the first product born of an independent effort at Qualcomm to produce a laptop chip, as opposed to a repurposed mobile platform, to take on Intel in the ultraportable space. And I have to say, it looks promising.

The chip is built on the same 7nm process and uses the same eight basic processor cores (4x A76, 4x A55) as the Snapdragon 855, but the similarities kind of end there. This Kryo 495, as it’s called, is cranked up higher and has a ton more cache - a full 10MB between the L2, L3, and system cache. It’ll be able to handle up to 16GB of RAM, has native support for NVMe and UFS3.0 storage, and Qualcomm’s promising performance that should have Intel looking over its shoulder, if perhaps not fully panicking just yet. 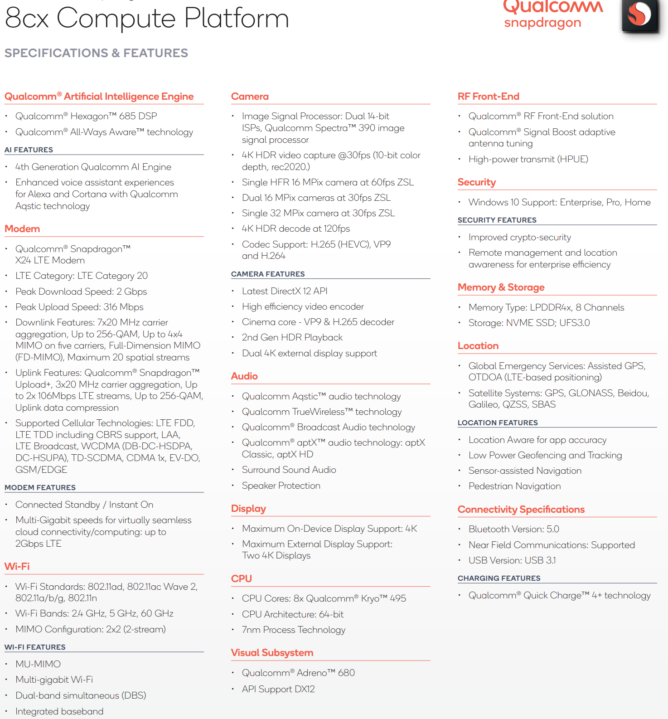 For example, at a sustained consumption of around 7 Watts, Qualcomm claims 8cx performs twice as fast as a comparable U series (presumably, a dual-core) and four times as fast a Y series (Intel’s fanless lineup) simply because it doesn’t get heat throttled. These numbers are kind of meaningless in a vacuum, and they don’t tell a peak performance story that I think Qualcomm is less eager to discuss - but they do matter, even if less than Qualcomm would suggest.

The GPU has been supercharged, too, and offers fully double the performance of the one in the Snapdragon 845, achieved by using twice the transistors and offering twice the memory bandwidth of the previous chip.

Battery life remains Qualcomm’s major selling point, and they expect these machines will easily last people two full work days and then some on a charge. A laptop that lasts multiple days before it needs a juice-up from the wall wart is a seriously attractive proposition to travelers, and if Qualcomm can get the full Windows experience where it needs to be (for example, Chrome support is currently lacking), there’s a real chance this could upset Intel’s long-standing monopoly in the laptop space.

Momentum is most of the battle here, though, and if manufacturers were spooked when Qualcomm’s first round of laptop chips wasn’t a hit with reviewers or consumers, it could be tricky to get that cat back in the bag. But in a highly competitive market, somebody’s probably willing to take a chance just to be different, and Qualcomm’s brand of “different” in Intel-land has undeniable appeal: built-in LTE, proper Bluetooth and Wi-Fi, amazing battery life, and a handful of parts - instead of a bucket - to choose from that haven’t been hamstrung for the sake of upselling. As a package, there’s a lot to like.

So, when can we expect the first Snapdragon 8cx laptops? Qualcomm assures us partners are on board and that the first products will launch in the second half of 2019. That’s a fair ways off, suggesting that the 8cx probably isn’t in a fully-finished state of development just yet. Qualcomm is probably pushing the news out here to keep the Snapdragon PC narrative cycling, as the products themselves to date have yielded lukewarm interest.

Now, just get me a Chromebook with one of these things, Qualcomm.