Qualcomm described its new flagship Snapdragon 855 processor in detail today at the company’s annual tech summit event in Hawaii, and we’ve got the goods for you here. Below, you’ll find a table of basic processor specifications.

A specification table doesn’t really tell much of a story, though, so let’s break it down piece by piece to get an understanding of what’s happening. 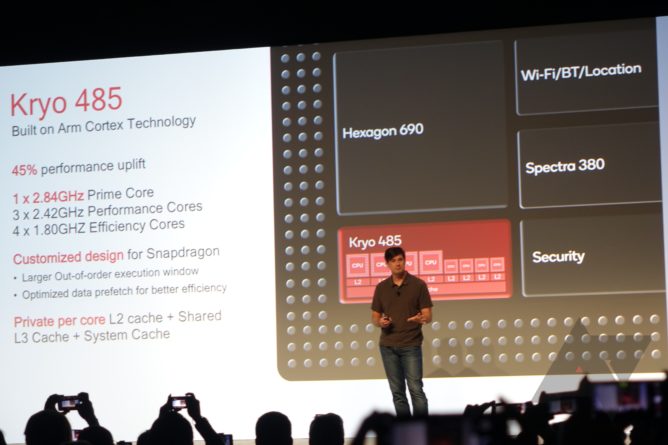 The Kryo 485 is 45% faster than the 845 and a bit more efficient courtesy of a 7nm process shrink, but it’s still not going to fix your Apple benchmark envy. Qualcomm has been notoriously tight-lipped about its CPU designs, but in recent years has moved to a largely off-the-shelf ARM big.LITTLE design, this time utilizing the A76 (which is brand new) and A55 cores. The Snapdragon 845 used the A75 and A55, so while there should be some extra performance and efficiency headroom courtesy of the shrink to 7nm (from 10nm), you're also getting a bump from that new A76 core. We’re at a point with CPUs where everyone is just managing incremental gains every year, but this is a substantial bump - the largest between any two generations of Qualcomm processors, according to Qualcomm. And while the processor obviously matters a lot, it’s simply not the centerpiece on a smartphone anymore (arguably, no piece is). 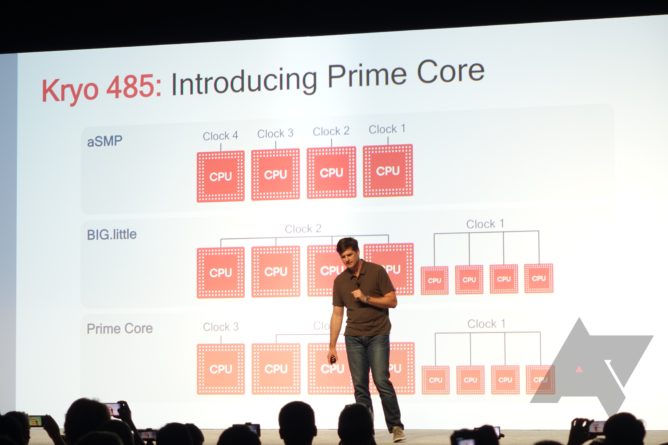 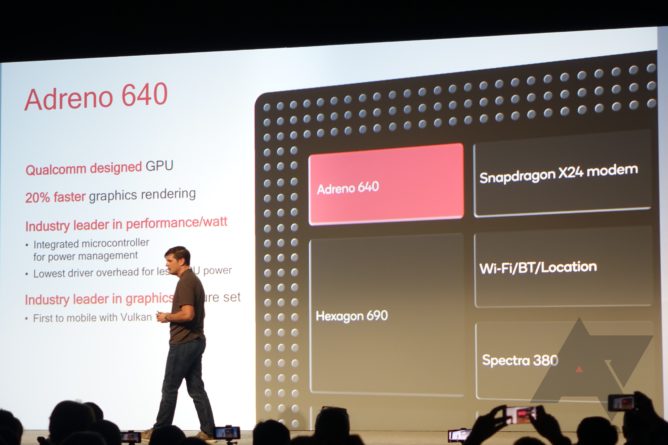 The newest iteration of Qualcomm’s Adreno GPU is offering 20% more performance than the outgoing version on the Snapdragon 845, which I have to assume is being largely achieved with additional processing nodes (Qualcomm isn’t talking). The speed is important - GPUs are such a huge part of our phone workloads these days - but feature set is also a big part of the GPU equation. This year, Qualcomm has rebranded its codec engine into something it’s calling the “Cinema Core,” and the upgrades are noteworthy: Qualcomm promises 1/7th the power consumption when playing back video in high-efficiency formats like VP9 which, by relation, now has its own dedicated codec on the chip (which should mean no more choppy 4K YouTube). There’s also now support for HDR10+ (versus plain old HDR10) video and, interestingly, HDR for gaming (HDR in mobile gaming is currently not much of a thing, though). 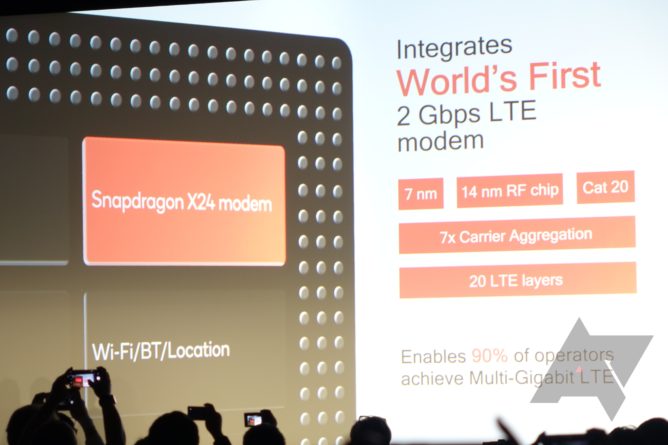 The Snapdragon X24 was detailed way back in February this year, and you can read all about it here - the short version is that it’s Qualcomm’s most advanced LTE modem to date, offering theoretical maximum download speeds of 2Gbps. It’s the fastest, most efficient LTE modem they’ve ever built, but it’s really a pretty iterative update compared to the X50, which is now the star of Qualcomm’s modem lineup.

The X50 won’t be featured in most Snapdragon 855 phones, though, because it’s a discrete module that OEMs will have to choose to add to their devices for 5G connectivity - and the vast majority of smartphones shipping in 2018 won't need 5G. This makes sense given the immature and varied state of 5G networks, as there’d be no point to a 5G modem in a phone in a country or region where no 5G networks existed, and it would add substantially to the cost and complexity of a device. For those phones that do have the X50, performance and capabilities are going to vary significantly depending on the network. Qualcomm says that for the millimeter wave networks we’ll see on carriers like Verizon and AT&T, your phone will probably only maintain an active 5G connection for activities when the speed is needed - downloading apps, streaming videos, and other data-intensive use cases. Otherwise, it will sit idle and rely on the 4G LTE network for background data and basic connectivity like telephony and messaging.

As to those crazy gigabit speeds you're seeing everyone crow about, they're impressive, but they're really just a small part of the 5G story. You have to remember that the goal for carriers with is always to reduce the amount of congestion individual devices cause the network, and a 5G modem would serve that end. If you can buffer an entire HD video or playlist in a matter of seconds (theoretically) instead of getting it bit by bit over the course of minutes, your modem is spending an order of magnitude less time “hitting” the network - saving you battery, and keeping the network freer of congestion. That’s the kind of experience the X50 should - again, theoretically - provide. But it'll probably be years before that's actually common. 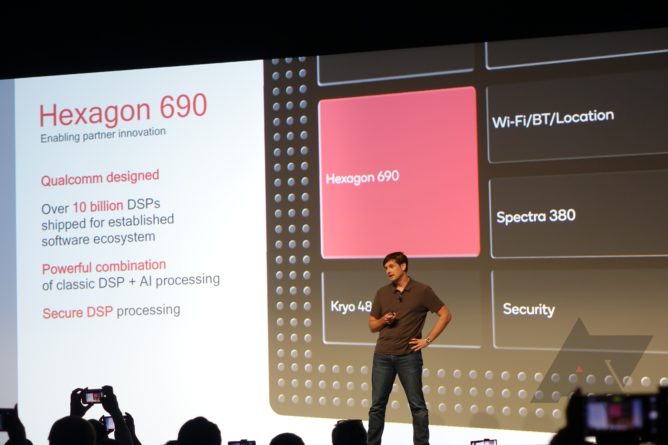 The rising star in the chipset game of the last couple years has definitely been the DSP, which most chipmakers have rebranded into some kind nonsense AI thing because of its frequent use for machine learning and on-device artificial intelligence (for example, Google Photos’ search function runs using an on-device machine learning algorithm). Qualcomm’s doubling down on the DSP this year, quite literally, with the Hexagon 690 by increasing the number of primary vector processors on the chip from two to four. That should greatly increase its capability overall. They’re also adding a dedicated voice assistant processor which promises to improve the responsiveness and capability of your on-device assistants, which I’m very curious to see in practice. Finally, a dedicated Tensor Xccelerator core is being added for Tensor-specific AI/ML applications, greatly increasing the efficiency and speed of such operations versus using the old vector math processors. 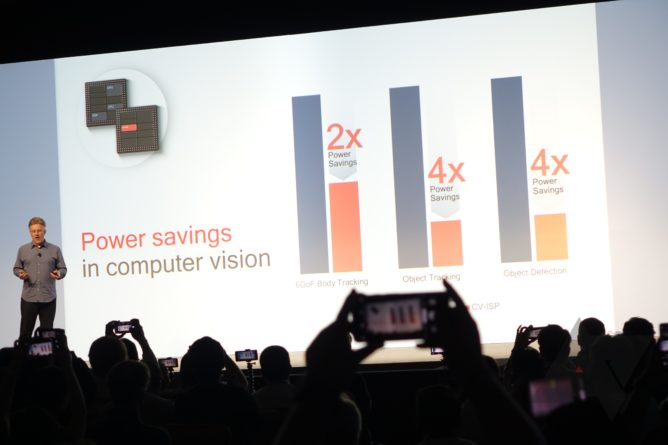 Perhaps the most impressive demo we saw from Qualcomm today was courtesy of its new Spectra 380 image signal processor - the brains that power your smartphone’s camera - and just how much more capable computer vision is making our phones. This new Spectra ISP supports 4K HDR video capture at 60 frames per second - while rendering a real-time video bokeh effect. That’s right: your next phone could be producing bokeh video. It’s pretty crazy and while the demo looked great, we have to keep in mind that it’s a tightly controlled demonstration, not a live product, so it’s hard to say how well it actually works in reality. Still, that it works at all is pretty crazy - throw all the money you want at a fancy Sony mirrorless camera, it can’t do that. Qualcomm’s moved a lot of the bits and pieces that previously lived on a separate part of the chipset that were responsible for things like this directly onto the ISP, significantly reducing power consumption while capturing video or performing computer vision-oriented tasks. For example, on the 855, capturing 4K60 video in HDR consumes just a third the power capturing 4K30 SDR video did on the Snapdragon 845. There’s native support for HEIF and HEVC capture baked in, too, which I have to bet is high on the list for features of the next Pixel phones (and the Google Photos team). 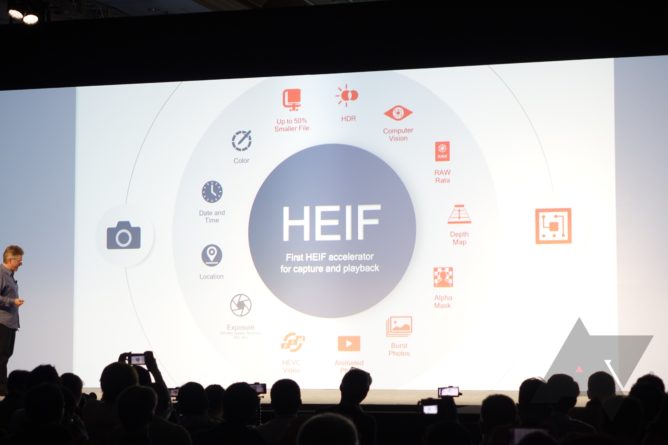 When a new chip gets announced, we tend to focus a lot on CPU and GPU, and sure, the 855’s CPU and GPU performance are significant, but they're not game-changing, but I really don’t think they need to be. The smartphone game is becoming one more of “can you?” than “how fast can you?” and Qualcomm is doing a great job advancing the larger feature set of its products. No, it’s not as fast as an Apple chip in a single core Geekbench test, and that trope is beyond tired at this point (even if what Apple has achieved is extremely impressive). Smartphone chips are getting to be more and more heterogeneous creatures, utilizing many parts of a larger system to accomplish tasks that heretofore would have been hard to imagine even if the sky was the limit in regard to processing power. And sure, increasing the power and efficiency of those constituent parts is important, but coming up with ways to use them - and completely new parts to do all the new things we rely on our phones to do - is where the real innovation is happening.

Anyway, that’s a quick summary on what’s new with the 855. Phones with the Snapdragon 855 will be landing in the first half of 2019, and you can probably bet the first high-profile US launch will come in the form of the Samsung Galaxy S10 around February or March next year. We’re still here in Maui for more Snapdragon news and demos, and we’ll be bringing you more coverage over the next few days.