It's the first Monday in a new month, so there's one thing you can typically expect from today: Google will release its monthly security patches for Pixels. There are a couple of surprises this month, though. The Nexus 5X and 6P are still getting updates, and December images for Google's 2016 Pixels are again curiously absent. The list of functional patches included this month is large, and it also includes "improved memory performance in certain circumstances," for the Pixel 3, 3XL, 2, and 2 XL.

As for that last patch, we don't know just yet if it's a fix for the Pixel 3's multitasking woes, but it would align with the expected timeline for a fix (Update: and in our own testing it seems to fix the issue), though it does curiously include the Pixel 2 and 2 XL as affected devices. We'll have to flash the image and check for ourselves, so keep an eye out for a coming update to this post.

Although technically last month marked the last time that Google was obligated to deliver security updates for the Nexus 5X and 6P, the company has apparently decided to continue anyway, as both phones have received December updates. The same can't be said for the 2016 Pixels, which ran into a similar issue last month. We even had a working theory for the delay regarding lack of system partition space for all of 5 minutes, but so far Google has remained quiet about the previous delay's cause. 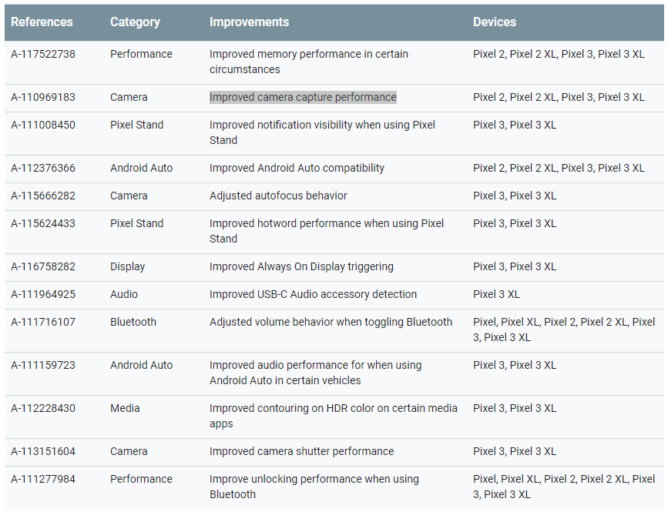 Last month's update only had a handful of functional patches for Pixels/Nexus devices, this month gets a comparatively massive list. Highlights include " improved memory performance in certain circumstances," " improved camera capture performance," and Android Auto compatibility/audio performance improvements — among a much larger list of general improvements. A good number of "high" and "critical" severity vulnerabilities (with the vast majority in Qualcomm's closed-source components) were also patched in the general security notes.

Both OTAs and Factory Images are live as we speak for all devices excluding the 2016 Pixels. Updated build numbers for devices with December's update are as follows:

As is also tradition, these images have been published before the OTA has begun actually rolling out, though if history is any indicator, some of you should get it starting later this afternoon.

I've sideloaded the OTA onto my Pixel 3 and memory management seems to be fixed. We've reached out to Google to confirm, but have yet to receive a response.

In the meantime, I'm able to juggle 8-10 apps with Spotify playing while taking photos with nothing being pushed out of memory. In my experience, that would indicate a difference in multitasking performance, but it's still technically possible this isn't the official fix for the problem. If a response to our inquiry isn't forthcoming, we'll attempt more extensive comparison testing for additional confirmation.