Have you been looking for a silly-large toy to occupy a bunch of space on your shelf or desk? Then boy, have we got a treat for you. Dead Zebra makes an absolute unit of an Android figure measuring nearly 10 inches tall, and it's on sale for $27.

Andrew Bell's Dead Zebra is known for putting out tons of smaller vinyl figures, but this one is in a league of its own. It's 9.75 inches high, and its head pops off so you can store stuff inside it. It's even insulated, so you can use it as an ostentatious cup holder if you want.

Ever want an Android the size of a (small) baby? 10" Mega editions only $27 today with 'HOHOHO' discount! https://t.co/cYBicE6Z13 #android #vinyltoys https://t.co/P8zfKTokZF pic.twitter.com/UEzeLkOuRX

In awe at the size of this droid.

Dead Zebra says the normal price of the big fella is $70, but the latest historical price data we could find says it generally goes for $50. It's on sale for $30 right now, and you can knock another 10 percent off — that's three bucks — with promo code HOHOHO for a final price of $27. This could make a great gift for a fellow Android geek (or yourself) this holiday season.

Giant-sized figures not your cup of tea? Dead Zebra also has its Android Heroes & Villains III set on sale, down ten bucks to $36. It includes four three-inch figures — two heroes, two villains — one of which is outfitted with a hidden 1GB USB flash drive. 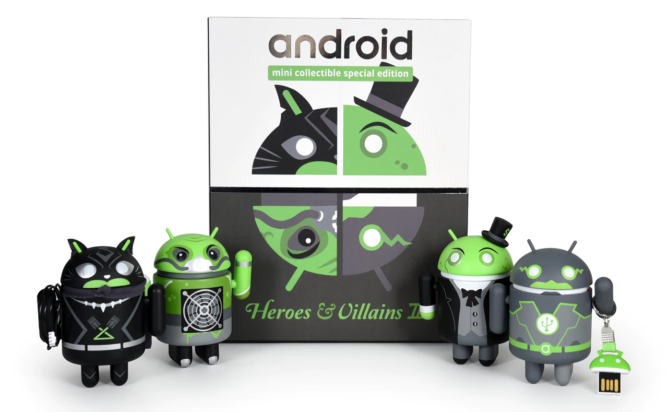