Call Screen was arguably the most impressive feature Google debuted at the Pixel 3 launch event. Google's AI can answer the phone and ask what the purpose of the call is, providing an on-screen transcript of the conversation so you can decide if you want to talk to them or not. Right now, the transcripts disappear as soon as the call ends, but the ability to save has been confirmed for arrival later this year.

We knew transcript saving was coming as the original support documentation said as much, but it's good to get some clarity on the timeframe. As spotted by 9to5Google, support replied to a question about saving transcripts for later viewing on a forum post in the Pixel Phone Help pages. A Googler (Paul Dunlop) said the functionality would arrive this year, first to beta testers and then to all Pixel 3 users before the end of the year — no mention of Pixel 2s, even though they are starting to get Call Screen now. See the full comment below:

I'm happy to confirm that we will be launching support for saving the transcript later this year. The transcript for the screened portion of the call will be automatically saved in your Call Log once the call has ended. You will be able to access it via the Call Details section of an individual call log item. This will be available to our public beta testers first, and then all Pixel 3 users later in the year.

This is something that will make Call Screen even more useful. We don't have such a huge problem with spam calls here in the UK, but I know my colleagues on the other side of the pond suffer multiple instances each day, for which Call Screen must really be a godsend. If you want to make sure you're first to get the transcript saving feature, sign up for the Phone app beta here.

Google has begun rolling out the Call Screen transcript feature, though so far it appears to be far from widespread. To see if it's gone live for your phone, under "Recent calls" tap "Call history" and then look for a new "See transcript" option.

Once it's there, you'll be able to pull up logs showing the interaction between your caller and the Call Screen robot, complete with time stamps and a record of when you joined the call: 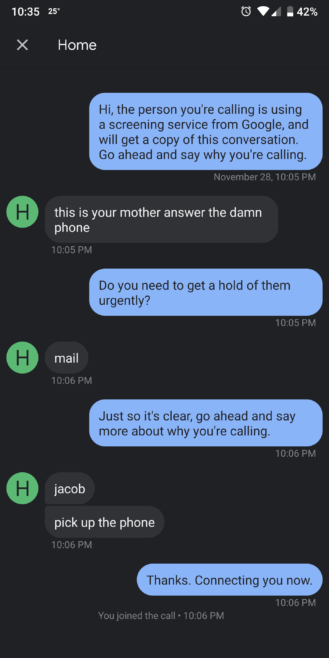