There's a new bundle available on the Humble Bundle website, and it contains a bunch of digital board game adaptations from Asmodee Digital. It's called the Humble Board Games Bundle, and it may not be specifically targeted at Android users, but there are up to five games available for purchase that run on our platform. So if you'd like to pick up Abalone, Harald: A Game of Influence, Splendor, King and Assassins: The Board Game, and Small World 2, you can grab them all today for as little as $8. 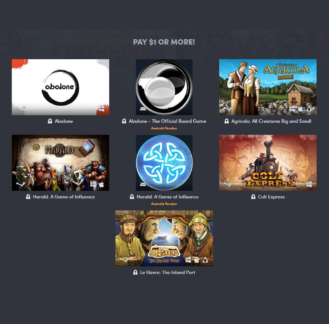 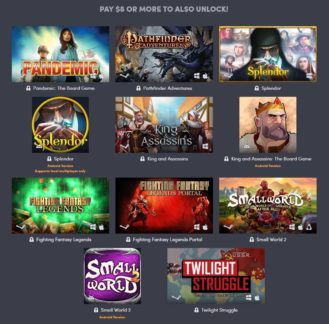 As you can see, there are two tiers available. The first can be had for as little as $1, but it only contains two Android games, Abalone and Harald: A Game of Influence. These two titles would cost you a total of $5.48 to nab them off of the Play Store, so you would be saving a total of $4.48 if you grab the first tier in this bundle for $1.

The second tier will cost you at least $8, and it contains three Android games, Splendor, King and Assassins: The Board Game, and Small World 2. If you total the Play Store pricing for all three titles, you would have to spend $13.47. This means you can save $5.47 by purchasing them through this bundle.

One thing to keep in mind is that some of these games behave differently than their Play Store counterparts. The Humble Bundle listing of Splendor only contains local multiplayer, when the Play Store release supports both local and online multiplayer. You may also run into a few issues if you eventually update these Humble Bundle titles through the Play Store, such as losing access to certain DLCs. Both of these problems are small issues most people won't ever notice, but it's something to consider before you spend your money.

In total, you can save up to $9.95 if you purchase both tiers of the Humble Board Games Bundle. This isn't the first time a group of Android compatible Asmodee Digital board games have been listed in a non-Android specific Humble Bundle, but it's always nice to have the option to grab a few of the company's digital adaptations at a discount. So if you don't already own these games, you may want to snag this bundle before it ends on December 11th. Heck, even if you already own a few of them on Android, you may want to still grab this bundle to gain access to the many PC compatible listings.

Project Fi is now Google Fi and supports phones from Samsung, OnePlus, and even iPhones