Google's Home Hub and the Lenovo's Smart Display might be the most popular Assistant-based smart displays this Black Friday — we figured the hardest decision people would have was between the two — but they're not the only Assistant-game in town. JBL's Link View is an option for those that prioritize audio over video. And if you want to pick one up for cheap, Verizon has it for just $150 right now. That's $50 less than any other retailer right now, and $100 less than MSRP.

Earlier this morning someone at Verizon must have made a mistake. By error or intention, it was just $125 for a short period, though the price has been bumped back up since. Still, most other retailers like Best Buy have the speaker listed for $50 more with Black Friday discounts. Even JBL itself is selling it for $200. 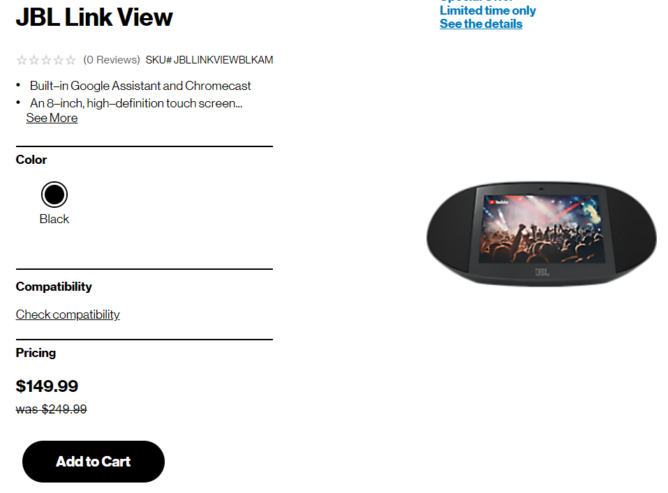 On the fence? Give Rita's review a read. Apart from the shortcomings that all Assistant-powered smart displays suffer, our only complaint is that the screen isn't quite as nice as the other options which are available, but the enhanced audio performance makes up for that — if it's your priority, anyway.

Verizon doesn't have an expiration date on this deal, but it labeled as limited time, set to persist "while supplies last." With Black Friday winding down as we build up to Cyber Monday, who knows how long it will hang around? They already corrected the $125 price earlier. If this is also a mistake, it could be gone raised again.