Verizon's latest update for the LG V40 ThinQ is all about making users look good, by way of creating digital avatars and fine-tuning their selfies to transport them to another place.

The patch includes a handful of new camera-centric features, including the introduction of "My Avatar" and Augmented Selfie capabilities, both of which look like they're meant for a lot of time-wasting (read: fun) applications.

Using My Avatar, you can create a cartoon avatar to be used in Messaging and other apps that feature an on-screen keyboard. The avatar is created from several photos of your own face, and can then be customized with different clothing and accessories.

The avatars can be used to take photos or record videos as well, and up to 15 different animated characters can be saved at a time. There's a variety of different poses and expressions that can be combined with your new custom avatar, which looks like a lot of silly fun akin to the popular Bitmoji app. 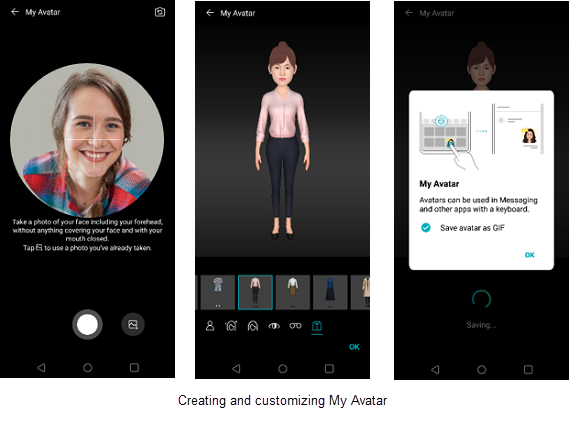 The new Augmented Selfie mode allows users to apply different backgrounds to photos taken in Portrait mode with the help of augmented reality. Choose a solid background for the photo from a color palette, an image from your gallery, or take a photo to insert it behind you in the portrait.

When you take a picture of someone after choosing a background, Augmented Selfie will merge the two. This is your best chance to look like you're spending time on a tropical island while the rest of us get used to chilly November weather.

The rest of the update's features aren't spelled out specifically in the latest patch notes, but they're probably far less interesting to the common user than fun new camera tools, anyway.

Create a human avatar by combining your own expressions.

In Selfie mode > Sticker, the user can take a picture or record a video with My Avatar
The user can create their own Avatar with the "avatar +" button
With "Save avatar as GIF" checked, 15 different animated My Avatars are saved in the Gallery > My Avatar folder

Expand the possibilities with augmented reality.

In Portrait mode, the user can apply different backgrounds using augmented reality
The user can select a solid background color from the palette, select an image from Gallery, or take a picture
When a user takes a picture of a person after selecting a background, Augmented selfie will merge the background and captured portrait