With Black Friday looming on the horizon like the dark lord of some retail apocalypse (well, that's how we see it - we have to write about it), you're going to see almost unending deals on external storage for your smartphone. And, sure, maybe if you don't care about how fast that card is because it's going in a smart TV box or just being used as a photo storage dump, a simple $10 microSD card can be just what you're looking for.

But if you want the best microSD card you can buy right now, there's actually only one obvious choice: SanDisk's new line of App Class 2 "Extreme" cards (we promise, this isn't an ad). 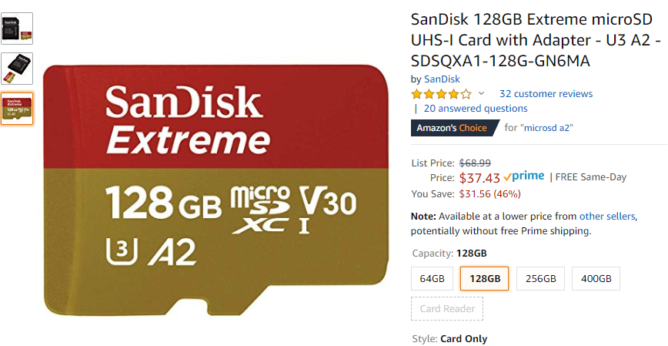 SanDisk is the only card manufacturer currently producing microSD cards with the A2 certification, the highest performance the body defining SD card standards currently provides in contexts specific to smartphone and tablet use for applications. That is: these SanDisk cards provide the highest level of performance (read and write speeds) for running applications of any microSD card on the market for smartphones and tablets - there simply isn't another A2 card out there yet (note that while faster UHS-II microSD cards exist, no existing smartphone is compatible with UHS-II cards, as they feature a different pinning layout). This blurb from Anandtech (full article here) gives you a sense of what that actually means. In short, the A2 cards are staggeringly faster than even the relatively new A1 cards:

More importantly, in line with the A2 requirements, the new SanDisk Extreme microSD have a random performance of at least 4000 read IOPS and 2000 write IOPS (keep in mind that Western Digital does not disclose actual performance of the card, which may exceed A2 requirements). In addition to enhanced random performance (vs. 1500/500 read/write IOPS mandated by the A1), A2 cards are required to support such functions as command queuing (with a minimum depth queue of 2 and a maximum depth queue of 32) to optimize random read performance, caching to hit write performance targets, as well as self-maintenance capabilities.

These cards just came out a little under a month ago, and they're already discounted significantly - the 128GB card was around $37 on Amazon at the time of this posting, and the 256GB card is (admittedly, a far less appealing) $105.

So, before you pull the trigger on that ultra-cheap 128GB card on Amazon Gold Box or NewEgg, maybe think about what you'll be using it for. If you want the best performance possible, there really is only one king of the hill right now, and it's these SanDisk cards.

The Best Buy deal is back! The card is now just $29.99 at Best Buy (free shipping), which is definitely the best price we've seen so far.

This is the "Extreme PLUS" variant of the card, which is ever-so-slightly faster than the regular Extreme one on Amazon (about 10MB/s faster reads). Regardless, it's a steal at this price, so go and get it.

Amazon's price has dropped to just a little over $35, the lowest it's ever been. Not as good as the brief Best Buy deal below (which has since gone up to $55), but it's still an insanely good price given this is by far the fastest microSD card lineup on the market right now (and the only A2 class cards out there).

A reader points out that these Amazon cards are actually slightly slower than SanDisk's Extreme Plus version of this card line - the 128GB Extreme Plus card (which has advertised read speeds around 10MB/s faster - not a lot, but not nothing) is actually available at Best Buy  (Update: It's now $55 - so we recommend the $37 Extreme card on Amazon above!), making it faster and cheaper. I'd pull the trigger on that one ASAP if you don't mind buying from Best Buy, as this Extreme Plus card is far pricier (over $100) on Amazon at the moment. 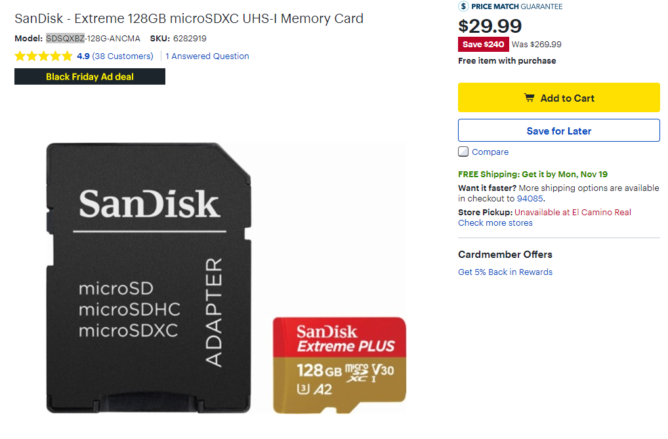 SanDisk also makes an Extreme Pro-branded line of these cards, but the advertised read and write speeds are the same as the Plus models at Best Buy. The Pro cards seem to have very sporadic availability and are priced much higher (the few places they're even available), so we don't really recommend them for the time being anyway.