High-end Chromebooks have been attracting all the news recently, but it's products like this, Lenovo's C330, that bring the platform back to its roots. For many, the appeal of a $700 Chromebook is lost if all you need is a cheap internet-connected machine for the kids, kitchen, or grandma. But historically, those cheap Chromebooks have had a bundle of compromises to weigh and compare. Thankfully for the budget-conscious, Lenovo's C330, with its IPS display and surprising build quality, makes arguably the fewest compromises for a sub-$300 Chromebook.

The C330 is offered in both 32GB and 64GB storage variants, but our review is for the more expensive $300 64GB model. Performance between the two should be similar, if not identical. 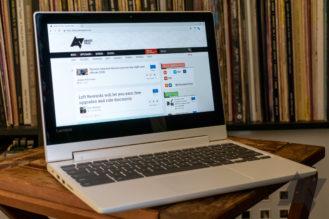 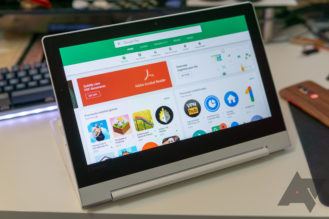 The C330 follows the traditional 2-in-1 Chromebook design with a screen that can flip back for tablet use. The all-white plastic build is surprisingly robust for the price, but I wish the shell for the screen were more reinforced; it flexes a bit more than I'm comfortable with when pulling the display up, down, or flipping it around. There is, unfortunately, no mechanism (like a magnet) to lock the screen in place in a tablet configuration. 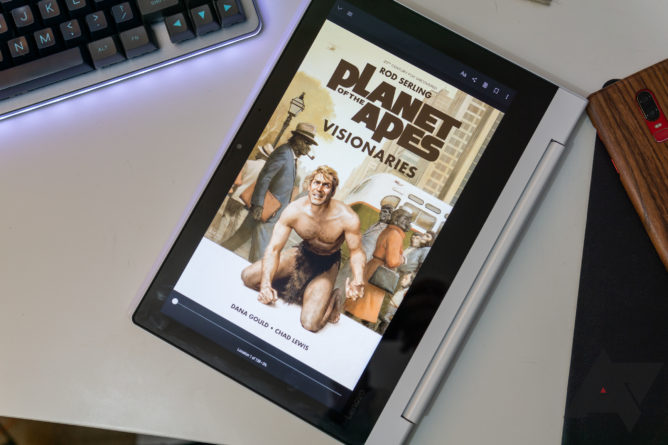 Aesthetically, it's an uninspired design typical of most 2-in-1s, but Lenovo's build quality exceeds what I would have expected given the $280 price. The plastic seems thick, durable, and easy to clean, without showing fingerprints or grime, and unlike many cheaper Chromebooks, it doesn't creak or bend disturbingly when you wrench on it (except the display, anyway).

On the left, you have a USB-C port (which is also used for charging), HDMI output, a USB-A port, and an SD card slot. The right has a Kensington security slot, power and volume controls, and a headphone jack. The tapered front and rounded back are unadorned.

The USB Type-C port doesn't have much of a click when inserting a cable, but it works fine. The older HDMI and full-size SD slot are a bit anachronistic, but arguably more useful in a cheap device like this. The only thing I'd have liked to see is a 2nd Type-C port on the right for ambidextrous charging. 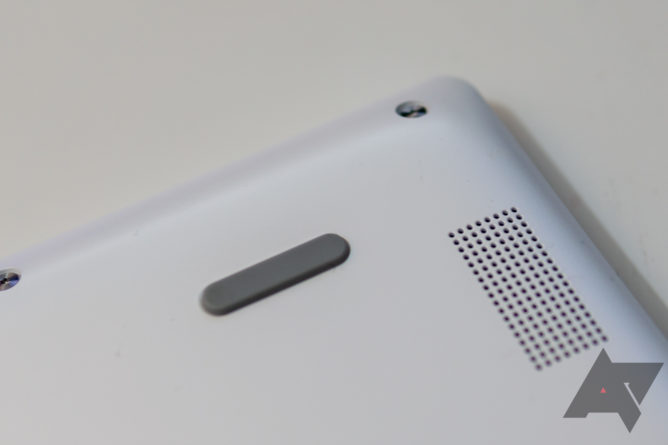 Speakers are on the bottom to the left and right. They get surprisingly loud without distorting, but they are very tinny and almost entirely lacking in bass.

The Chromebook comes with a USB Type-C charger in the vein of the ubiquitous, generic laptop charger: a black box with a tethered cable, and a port for AC input. It claims to max out at 45W of output, but in my own metered tests, the Chromebook never seemed to pull over 30W.

The non-backlit keyboard is shallow and a bit lacking in tactile feedback. Being a bit on the thicker side, I had hoped for more key travel. As is tradition, I wrote a large chunk of this review from the Chromebook without any problem, though my speed was down a bit to around 95WPM from my 110-120WPM average. 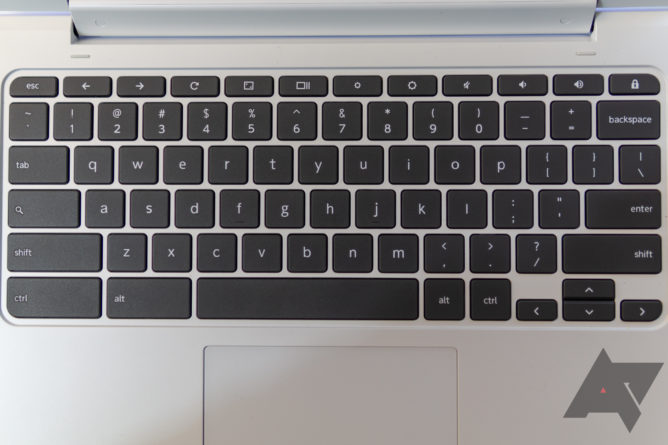 My biggest pet peeve in Chromebooks is a poorly engineered touchpad. Specifically, I hate when the clicking mechanism is loose or a spring places the touchpad too far above the switch, giving an annoying rattle on tap. The Lenovo C330, unfortunately, does precisely that. It doesn't impair its use at all or break any functionality, but it's annoying if you're picky about it. Every time your finger comes down to rest for a swipe, you'll hear that slight rattle. 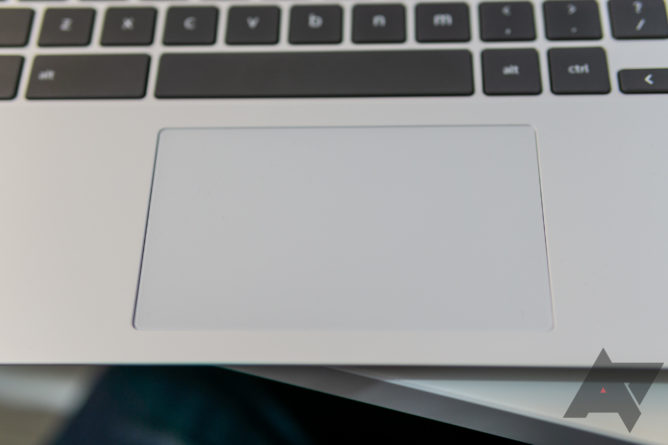 Outside of that very specific complaint, it's a good touchpad, with a nice low-friction texture that makes gliding around much easier and precise movements more fluid. Two and three-finger gestures all worked as expected. Compared to some other more expensive Chromebooks I've used recently, this is among the better touchpads out there, especially given the price. According to my own super-scientific testing (I scraped it with a pin), it is made of plastic, though, and not glass. 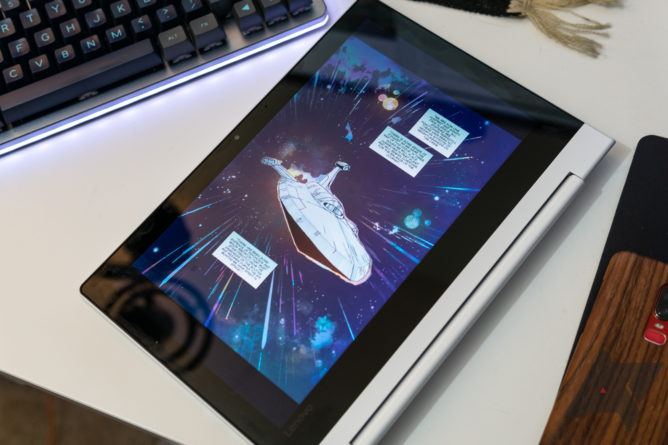 The C330 has an 11.6", 1366x768 IPS display. While I do prefer a slightly taller aspect ratio, and the extra bezel beneath the display is borderline distracting in size, the quality of the screen is still significantly better than most sub-$300 Chromebooks, which tend toward TN panels.

The display is a bit too cool to call calibrated, but at least it isn't oversaturated (or a TN panel with razor-thin viewing angles). Its 133 PPI density means you'll see every individual pixel, but backlighting on my unit was even, with no bleed or glow outside the off-angle typical of IPS panels, though the housing for the screen is flexible enough when tilting backward and forward to give you a bit of that characteristic liquid effect.

At 200 nits of max brightness, it's also not a very bright display. Between that and the glossy nature of touchscreens, don't expect a whole lot of visibility outdoors. I also wish the hinge for the screen was a bit stiffer. Picking up and setting down the laptop is enough to move it into a different position, and just a hair more resistance would have been optimal.

The C330 is powered by a MediaTek MT8173C. It's not an especially powerful SoC, and it's a bit old at this point, but in benchmarks and day-to-day use it's about on par with the low-end Intel N-series Celeron chips in cheaper Chromebooks. Being ARM, it also seems to have a bit of an edge with Android apps — both in anecdotal use and in some benchmarks. 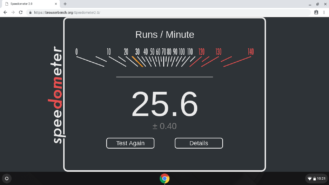 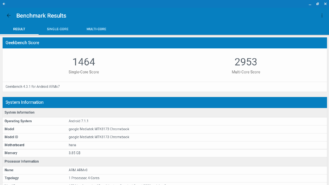 Sadly, this Chromebook doesn't currently have Linux apps support, but it's coming.

Lenovo rates the C330 as lasting 10 hours on a charge, which I think is more than a bit optimistic. Realistically, I'd expect closer to 7 hours of actual mixed use, though you could stretch that out if you're willing to dim the display or limit yourself to media consumption.

Yes. Without reservation, I can wholeheartedly recommend Lenovo's C330. Excusing the lackluster SoC performance — which, realistically, is on par with other similarly priced low-end Intel Chromebooks — Lenovo's C330 has surprisingly good quality for just $280.

Of course, Lenovo did have to cut some corners. This isn't a $700 Chromebook. On the one hand, the display is glass, the screen is IPS, and the build quality isn't the creaky-bendy junk you expect at netbook-level pricing; but on the other, that screen is just 200 nits, performance isn't amazing, and the keyboard could be backlit and a bit nicer to use.

Lenovo's Chromebook isn't very thin, or metal, and it doesn't have a high PPI display, but you'd have to pay a lot more than $280 to get those features. In fact, the C330 has already been on sale for as low as $180, and at either price, I think it's a steal. 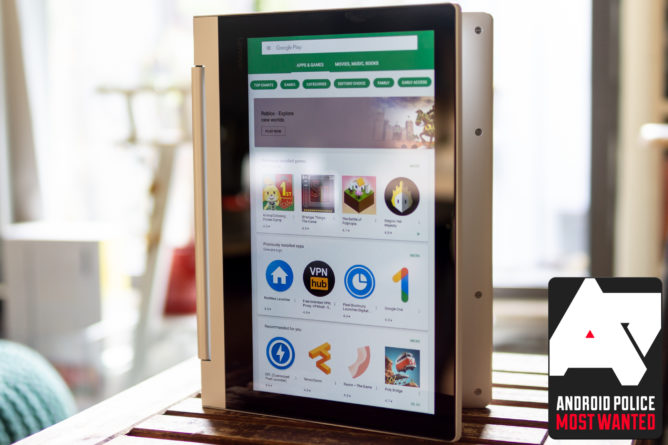 It's not perfect by any means, but it doesn't need to be. The C330 is one of the best "cheap" Chromebooks money can buy, period.

The Lenovo C330 can be purchased at the retailers below: