Just a few short years ago, Nokia was seldom mentioned on Android Police... or much of anywhere, really. Microsoft gobbled up Nokia's renowned smartphone division and still couldn't make Windows Phone work. The remainder of Nokia partnered with HMD to revive the brand in 2016, and some of the phones to come out of this partnership are fantastic, helped by Nokia/HMD's commitment to Android One.

We've given high marks to phones like the Nokia 6.1 and 3.1—both fantastic budget devices. The 7.1 caught our attention because it's going after a long-neglected space with its $350 price tag. The Nokia 7.1 presents itself as the best of both worlds: premium features and hardware with a price that's still manageable. On paper, the Nokia 7.1 has a lot going for it: a powerful mid-range Snapdragon chip, a big screen, and extensive LTE support. In practice, it doesn't quite live up to the hype.

Like many modern phones, the Nokia 7.1 is a glass and aluminum sandwich. The back panel is "2.5D," so it curves down slightly at the edges to make it more comfortable in the hand. The glass has a mirror-like reflective quality, so get ready for lots of fingerprints. The 7.1 also has the chamfered edges on the aluminum frame we've seen on many of Nokia's past phones. They're visually appealing and add a splash of color on the white model. The gunmetal blue model is a nice looking phone, but it's not as flashy. The buttons are aluminum and have that same chamfered edge. 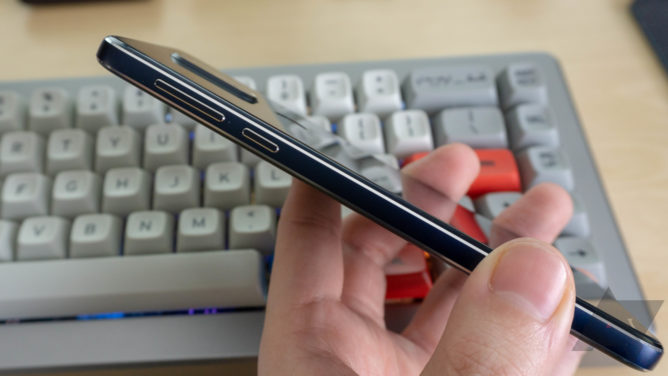 The Nokia 7.1 has a fingerprint sensor in the traditional location on the back just below the camera hump. I've had no issue with the fingerprint sensors on past Nokia phones, but this one seems problematic. On both of Nokia 7.1 units I've used, the sensor takes a beat longer than I'd expect to unlock the phone, and it's very picky about recognizing my fingerprints. I had to delete my stored prints and retrain the phone a few times before I got a profile that worked reliably. Nokia definitely has some optimization to do here.

It won't take you long to notice the Nokia 7.1 has fully embraced the notch. It's the same shape as the Pixel 3 XL but much more compact. There's a small earpiece (it's not a speaker) in the middle, flanked by a sensor window and a front-facing camera. The cutout is about one status bar tall, so the phone's interface doesn't look strange or disproportionate like a certain other 2018 smartphone. The radius of the rounded corners and the bezel of the phone are roughly symmetrical at the top. It's at least close enough that I don't find it visually off-putting. 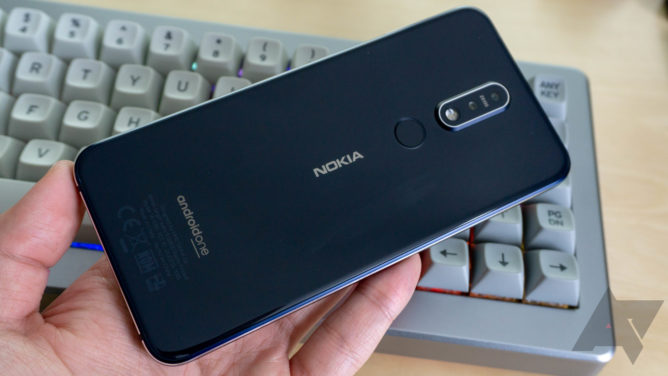 Down at the bottom of the 7.1 is the most prominent example of why this is still a mid-range phone. Despite the space-saving notch design up top, the bottom has a rather large chin. Nokia was also good enough to slap a logo on the chin, so thanks for that.

The display is an LCD, so I'd expect some chin at this price point, but this one is huge, and you don't even get a front-facing speaker. It's a 19:9 1080p IPS panel, and both the colors and sharpness are fine. The brightness is good enough to use outdoors, maybe a little lower than the Pixel 3. Bonus points for HDR support, too. Nokia has an HDR upscaling feature included in the software, but that's not something to crow about. It's on by default, and it makes a very minor difference when watching non-HDR videos. It might improve the dynamic range of some videos, but it made some look over-processed to me. 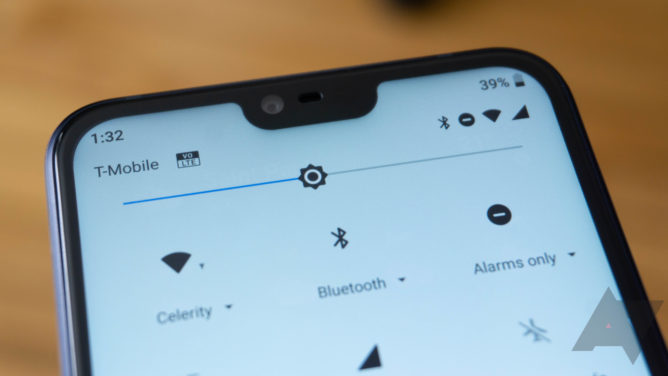 The display is a bit of a problem on this phone. The backlight looks inconsistent on the top and bottom edges with shadows and hotspots, especially around the notch. I've used two different 7.1s, and both of them had this issue. It's a hard thing to capture in photos, but it's plain to see when you lay eyes on the phone. This isn't necessarily a deal breaker, but I don't know if I'd want to look at it every day. The radius of the corners is also a bit extreme—it can chop off UI elements that go all the way to the edge.

If you're still pining for the headphone jack: good news. This phone has one on the top edge. Down on the bottom, you've got the USB Type-C port and a downward firing speaker. If you're sick of disappointing haptics on Android: bad news. The vibration motor in the Nokia 7.1 feels loose and weak.

Nokia doesn't include much in the way of accessories with the 7.1. There's a SIM ejector, the usual bundle of warranty cards and manuals, and a USB Type-C cable/charger capable of 18W fast charging. This phone has a headphone jack, so Nokia was good enough to provide some earbuds in the box. However, it did not opt to provide good earbuds.

The Nokia 7.1 is an Android One device like all of Nokia's other recent launches (outside China). That means you get a clean version of Android and guaranteed updates. The importance of this really cannot be overstated. Nokia has launched this phone with Oreo, but it's supposed to get an update to Pie. That was supposed to happen in October, but we're still waiting.

The stock build of Android Oreo on this phone is even more barebones than a Pixel, which has custom Google features. I always find it refreshing to use a phone that isn't overloaded with redundant apps and system features I'll never use. The only real customization for Nokia is the way the status bar behaves with the notch. You can't enable the battery percent in the status bar, but the phone does show the percent when you open the notifications. It also has the VoLTE icon on the left next to the carrier name in the shade (if supported). 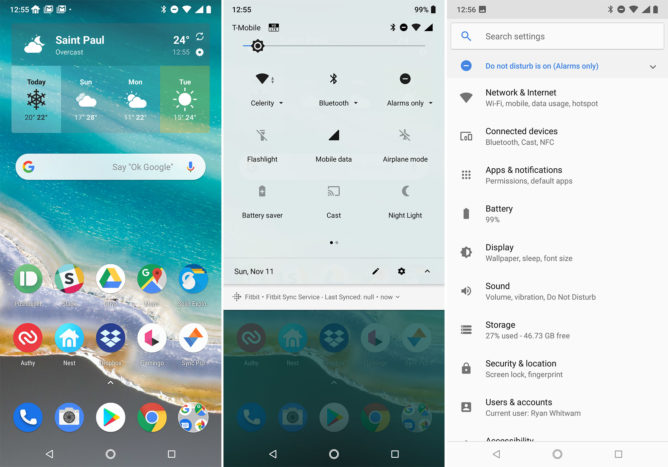 You probably associate stock builds of Android with good performance, and that's usually the case. With the Nokia 7.1, I've been somewhat disappointed with the speed and responsiveness. This phone runs on the Snapdragon 636, which uses Qualcomm's custom CPU cores. It should be faster than the Nokia 6.1 with its 630 SoC, but it's not. Apps don't load any faster, and the 7.1 gets choppy in situations where the 6.1 does fine. It can also be slow to wake up. The 7.1 isn't unusably slow, but it's not as snappy as it ought to be. I suspect Nokia initially expected to have Pie ready to go on this phone at launch, but couldn't finish it in time. Thus, the Oreo build isn't optimized very well. Hopefully, the Pie update is better. 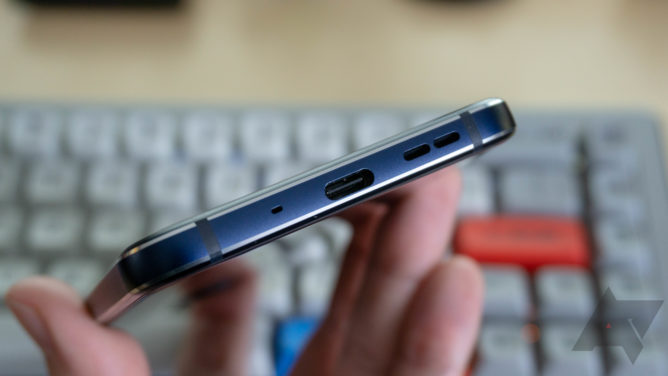 This phone has a middle-of-the-road 3,060mAh battery, so the longevity is nothing special. I have three Google accounts syncing, and I used the phone mostly for browsing the web, messaging, and a little music streaming over Bluetooth. With heavy use, I can get four or five hours of screen time over the course of a day. With lighter use, it's more like three hours over a day and a half. The Nokia 7.1 will make it through a full day with juice to spare, but it's not a multi-day phone.

When you plug it in, the stock charger does 18W. It appears to understand the USB-PD standard because my Pixel chargers can also channel 18W into the Nokia 7.1.

The Nokia 7.1 has a pair of sensors on the back: a 12MP main sensor and a 5MP depth sensor. This is a typical setup for budget devices where the secondary camera doesn't offer specific added functionality (eg. zoom or wide-angle). My overall impression of the Nokia 7.1 is good. It takes solid photos in bright light, and it doesn't fall apart as quickly in low-light as a very cheap phone. 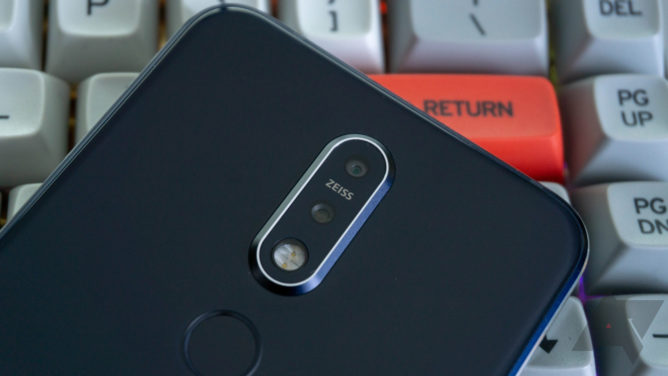 This camera is capable of very nice results outdoors and bright indoor settings. Photos are crisp and vibrant—actually a little unrealistically vibrant if I'm being honest. Regardless, they look nice. Nokia's processing does fuzz out some fine details, but that's only evident if you crop down. There is an auto-HDR mode, but it doesn't seem to make a significant difference. The dynamic range is average for a budget phone. You will notice some blown-out spots in harsh lighting and loss of detail in dark areas. In dim settings, the Nokia gets some passable photos. It depends on what you're trying to capture, though. The 7.1 tends toward producing brighter pictures with longer exposure, so anything moving is going to get blurry. The white balance is questionable as well. The 7.1 does an above average job of controlling noise, so a stationary subject might still turn out alright. Processing seems mildly inconsistent across the board, but it's more noticeable in low light. You might take two photos a second apart, but one will look much better than the other.

Maybe in a few weeks. The Nokia 7.1 has enough hardware improvements to justify the price jump over the 6.1. The camera is better, the hardware is a bit more refined (unless you hate glass), and the specs are improved. It would be smart to wait a little bit on this phone because it's still running Android Oreo instead of Pie, and the current software is disappointing.

Nokia rightly deserves praise for offering a device with these specs for $350, but it doesn't do you much good if the performance isn't up to par.

Despite having better specs than the Nokia 6.1, the 7.1  is slower in daily use. It's not unusable, but I feel like I'm waiting for the phone to catch up too often.  Nokia rightly deserves praise for offering a device with these specs for $350, but it doesn't do you much good if the performance isn't up to par. And then there's the fingerprint sensor, which is slow and rejects scans too often. Hopefully, the Pie update is better optimized than the Oreo launch software.

I personally don't love the asymmetric look on the front of the phone. The notch isn't unusually bad, but the combination of the notch and a chin looks off to me. That said, the phone is designed well with the tapered rear glass panel and chamfered edges. The uneven panel lighting around the top is also a concern. It's subtle, so some buyers might not even notice. If you're picky, you will notice. 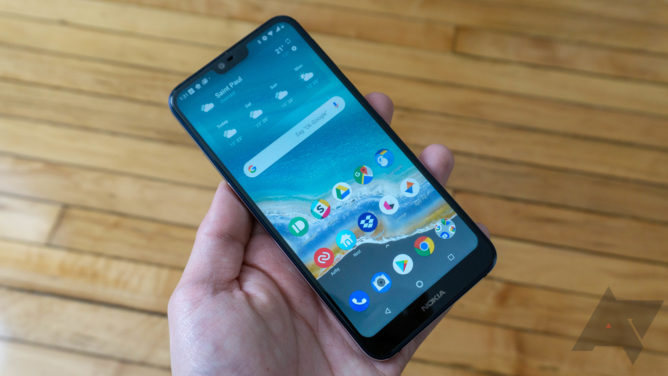 This is a phone I want to like, and maybe I will like it when the Pie update rolls out. It could smooth out several of the rough edges and make the Nokia 7.1 a smart purchase.

Cheaper budget phones aren't quite good enough, and you're willing to trust that Nokia will come through with a good Pie update.

You don't like notches or want a device that's substantially better than other budget phones.

[Update: APK Download] Project Fi is about to make switching from Wi-Fi to mobile data ...