Cortana's been on version 2 for quite a while, so users are no doubt excited to see what the next big iteration has in store. Thankfully, they don't have to wait any longer. The app's latest beta reveals version 3.0, which comes along with a major UI refresh and several feature additions, including improved conversational requests.

The new look is minimal and elegant, with less clutter to sort through and plenty of white space. In other words, a lot more Material Design-like. But it's not just a new aesthetic look — navigating the app is much more intuitive now, and Microsoft got rid of or consolidated a fair amount of stuff, including the unnecessary secondary tab on the home screen called "Interests." The information it held now just appears in the same home screen flow as all the "Upcoming" cards. 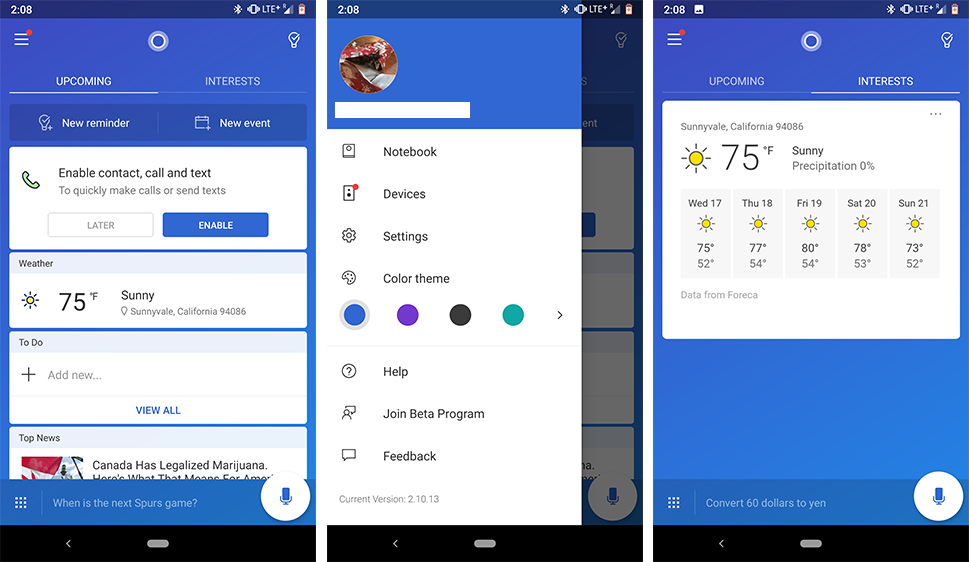 As for the new features, Microsoft focused on improving the UI for conversational experiences, which shows through with things like setting reminders. When you tell Cortana v2.10 to make a reminder, you have to enter the details manually, but Cortana v3.0 requests all the information via voice command — like Google Assistant. There's also new support for controlling music and podcast platforms Spotify, iHeart Radio, and TuneIn, and an option for joining a Skype or Teams call via voice command. The full changelog reads:

Microsoft is now in the process of working out kinks in v3.0, so anyone who wants a stable build will have to wait until that process is complete. Those interested in nabbing the potentially-buggy beta can enroll through the Google Play Store or nab it from APK Mirror.

Cortana 3.0 has now left beta and is rolling out to all users on the Play Store. If you haven't received it yet, you can download the latest release from APKMirror.