As Black Friday approaches, tons of deal are already dropping, with Best Buy getting heavily involved in the discount season. Another good one we've spotted there is an Ecobee4 WiFi thermostat for $199, and while that's not that incredible by itself — we've seen it that low before — they're also chucking in a free Amazon Echo Dot (3rd gen) with it.

Altogether, that means you're saving $50 off the MSRP of the Ecobee4, plus a further $50 that you would usually have to pay for the Echo Dot. The thermostat already has Alexa Voice functionality, so you can set the Dot in another part of the house so you can easily control the temperature wherever you are. Or maybe you already have enough Echos, in which case you could just sell the Dot on. 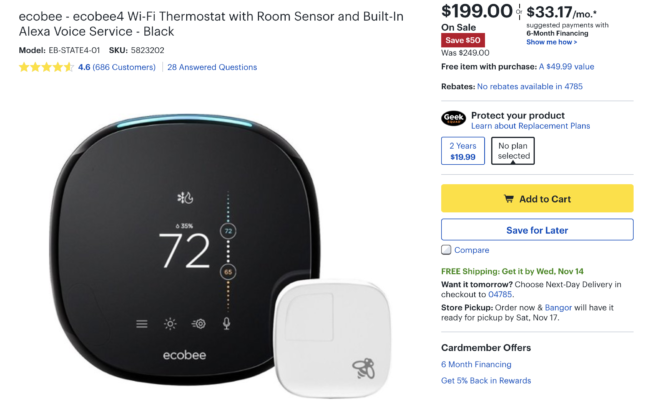 This Ecobee4 comes with just a single room sensor but you can buy more separately if you need to. If you're not an Amazon Alexa person, don't worry, Ecobee also works with Google Assitant (although not the built-in part), as well as Samsung SmartThings, IFTTT, and even Apple HomeKit.