Acer's Chromebook Spin 13 is arriving a bit later than it was initially expected, but based on what we've seen, it will be worth the wait. The 2-in-1, Wacom stylus-equipped Chromebook delivers category-topping performance, but tempers that speed with some unfortunate design shortcomings. Altogether, it's one of the best Chromebooks you can't buy right now. (Update: And now you can.)

Turns out, the Chromebook Spin 13 was originally targeted to business/corporate customers, and while I'm sure Acer is pleased with all the positive consumer-level reviews coming in,   The Chromebook is now available and shipping over at Amazon. While you wait to drop your own cash, let me tell you what I think about the Chromebook Spin 13.

The model we reviewed was the $899 i5, 8GB/64GB SKU. While performance will vary, it should be physically identical to the other models. Note, there is also a non-"Spin" model for coming availability at similar prices. Acer has always felt like it was at least a couple of years behind the design curve when compared to other OEMs, and that trend continues here. The lines, curves, and embellishments of the Chromebook Spin 13 are reminiscent of Samsung's laptops circa 2014 with strange lines, dated and ostentatious accents, and an odd sense of wasted physical space. I don't feel it's the most modern look, but that's subjective.

Physically, it's thicker than you expect for a 2-in-1 design, and generally a bit big. It is one of the most substantial 13" laptops I've used in years.

Acer's design is almost fully aluminum, though it isn't a unibody metal design, as many of its competitors may be. The deck is a physically separated aluminum plate, while the bottom and sides are another. The construction and beveled seams remind me of the much less expensive ASUS C101 and C100. The back of the screen is also aluminum, and the compromise for a two-part metal body is compensated at least partially by a more durable Gorilla Glass display. Still, at this price, I'd really rather have seen a metal unibody. 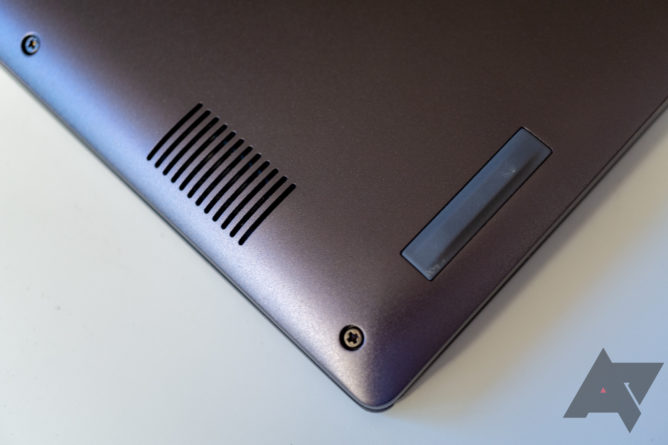 Speakers are on the bottom, near the front, and they're pretty okay. Don't expect much bass, and they're a bit hollow, but they get quite loud before distorting.

The hinge for the screen has a bit more play in the mechanism than I'd like. On both of the units I examined, the hinge on the right is a bit out of alignment and slightly twisted, which is concerning. 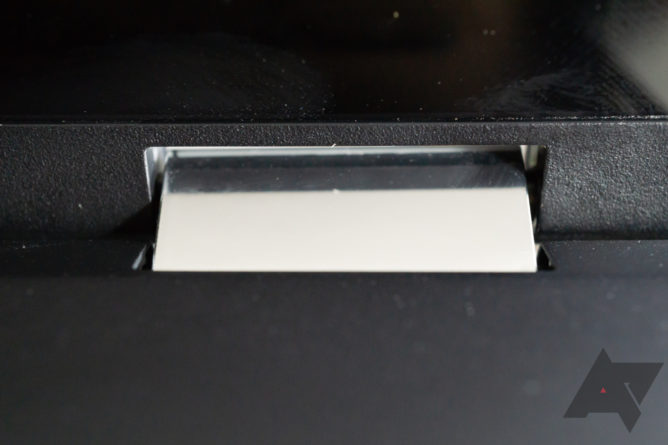 Acer saw fit to give the Chromebook a USB Type-C port on both the left and right sides, and both are good for charging. That was a wise decision, but unfortunately, there is only one charging LED indicator on the right side. The MicroSD slot is on the left side together with the headphone jack and USB Type-A port, and the power and volume controls are on the right. The tight-fitting stylus and its receptacle are on the front edge, pulled out via a lip you can hook with your fingernail. 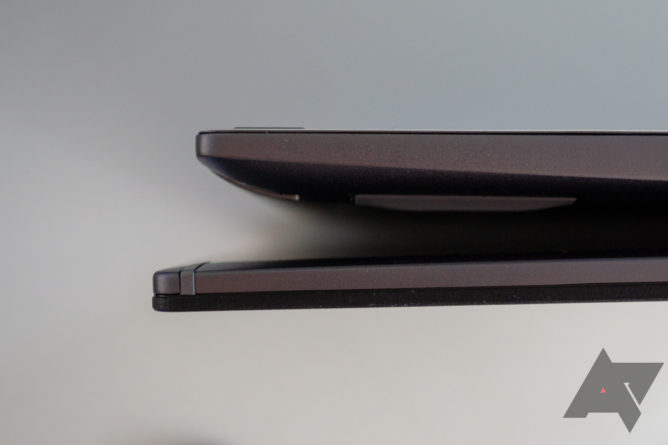 No magnet or latch to keep it together.

In tablet use, the Chromebook Spin 13's most significant design issues appear. There is no magnet or latch assembly to hold the Chromebook together as a tablet, so you'll have to squeeze/hold it shut on your own. By far the most confusing aspect of the Chromebook's design is the fact that the stylus can't be easily removed from its receptacle while in a tablet configuration: being folded blocks access. 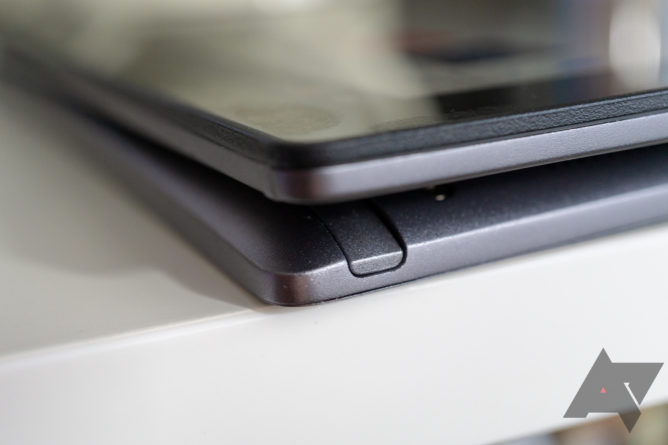 Hard to hook the lip on the stylus when it's flipped into a tablet configuration.

It's a bit inconceivable that Acer would have gone to the effort of designing a Chromebook with a higher-end Wacom digitizer, and then made it intentionally more difficult to use as a tablet, but for some reason it did. Parts of the screen on the first unit I received also make an audible clicking sound when pressing the stylus against them, but the second had no such issues. YMMV. 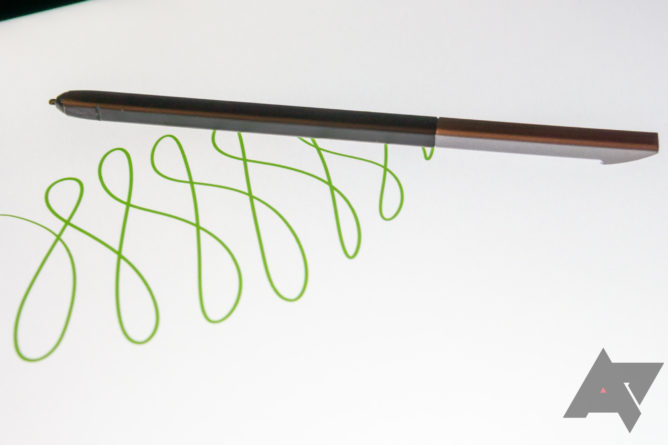 The stylus is a two-tone, two-part plastic square body with no buttons or "eraser" end for additional functionality. The tip is removable and replaceable. The Wacom stylus/digitizer solution being used in the Chromebook Spin 13 is pressure-sensitive. 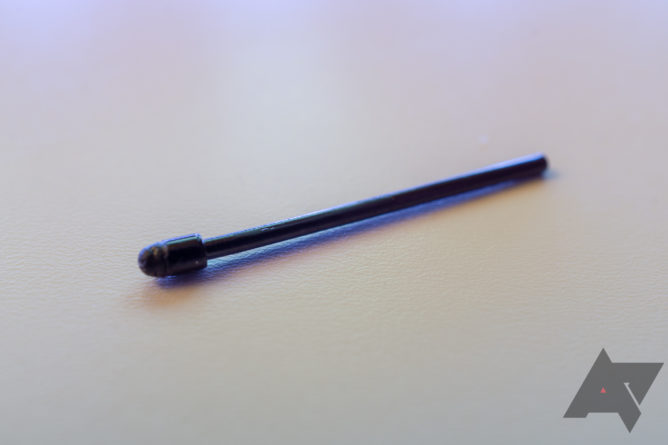 The stylus appears to use this nib. 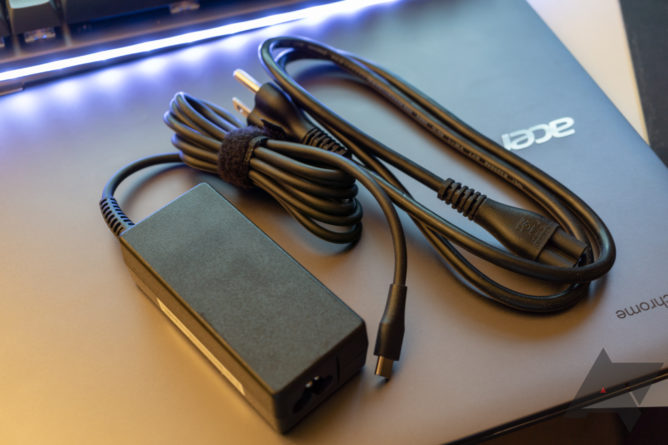 The Chromebook comes with one of the older-style chargers — you know the one: big black box, attached output cable, and a socket for a three-pin polarized "Mickey Mouse" looking IEC 320 C5 cable. $700-$1,000 doesn't buy you a pretty Type-C charger.

The keyboard feels a little bit shallow, but it's more than acceptable for a laptop in 2018. I was able to hit ~100 WPM, though I can do better on keyboard with more travel. However, the keyboard's strange backlighting is a bit annoying. 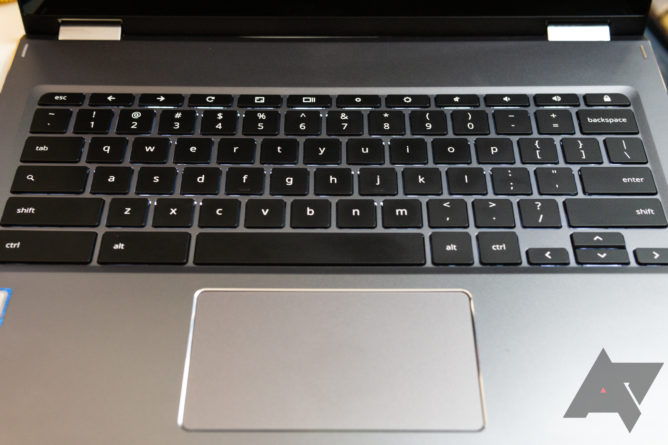 There are holes behind the keys, just far enough out of alignment that you see them as bright spots interspersed at random intervals in the gaps between keys. It's distracting, and it adds to the general feeling of cheapness. 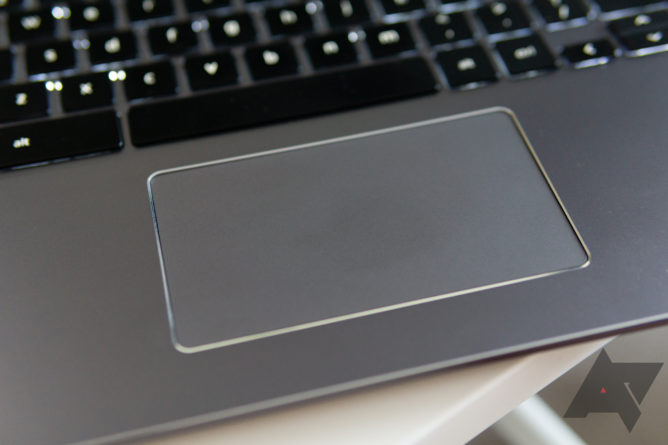 The touchpad is Gorilla Glass (like the display), and it's fine, but it's not great. The first unit I used had a rattle as if it was loose or worn out, making annoying clicking sounds even on a light tap. I reached out to Acer and received a second Chromebook which didn't have the issue, so YMMV. Touchpad acceleration is also a bit strange, and the surface itself has an inconsistency in friction, which makes precision movement occasionally less than fluid. 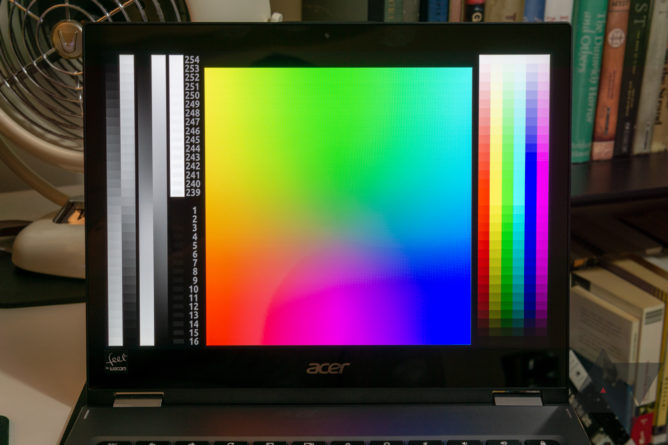 That banding is only visible from my camera, don't worry.

The screen is excellent. Color seems reasonably well calibrated, to the point I wouldn't object to using it for photo work. It's also quite even in illumination, and I didn't notice any significant backlight bleeding on my unit or any bloom outside that expected (and unavoidable) on an IPS panel. 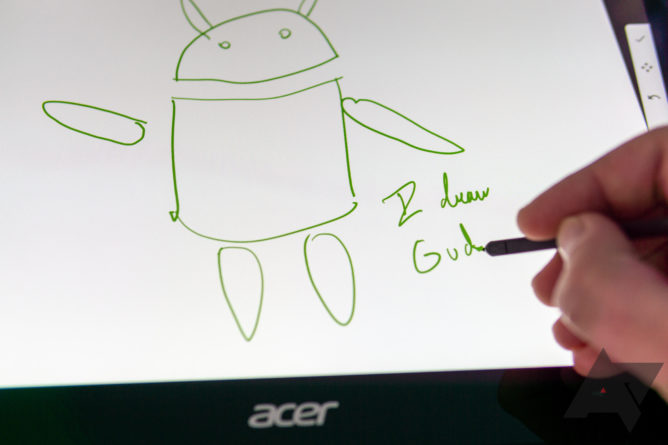 As I'm not an artist, the benefits of the Wacom-powered digitizer are lost on me. Based on playing with Android apps like Autodesk's SketchBook, it offers plenty of levels of pressure sensitivity, and I'm sure in the right hands it could produce excellent work, assuming other aspects of the hardware don't get in the way.

I was unable to get any of the more advanced or pressure/angle sensitive tablet functionality working in Linux, though. That's almost assuredly not Acer's fault, as Linux on Chromebooks is still in beta.

It's a Chromebook, so it runs Chrome OS. By now you should be familiar with the concept, but the short version is that it's the Chrome browser in a lightweight environment, now plus Android apps. For more info, feel free to peruse the software section of previous reviews.

The overall performance of the Chromebook Spin 13 is nuts. The unit we reviewed had a 15W (read: overkill) 8th gen i5 8250U, and it utterly screamed through every task I threw at it, beating even Google's Pixelbook by a substantial margin. For numerical perspective, I could swing 90.2 on the Speedometer 2.0 benchmark, and 4218 single-core (8759 multi-core) on Geekbench, all of which are pretty great numbers. 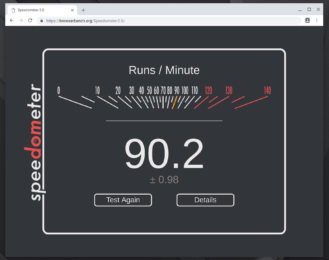 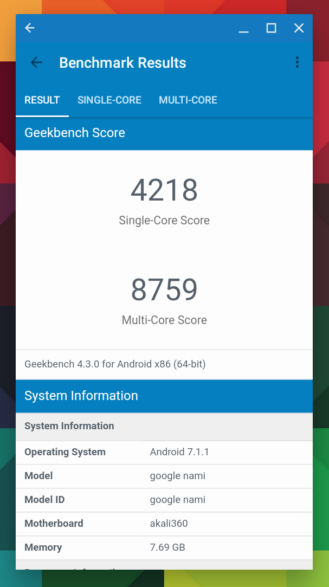 Battery life, in my estimation, is quite good. Acer claims up to 10 hours, and that might actually be possible. In my own workflow, which included anywhere from 5-20 tabs and occasional GIMP use, I saw closer to 7-8 hours, but I don't doubt that in very light use at low brightness 10 hours would be within reach.

The lone fly in the performance ointment is the Chromebook Spin 13's fan, which could use better hysteresis. On medium loads, it turns on and off rapidly, and under heavy use, it ramps up and down in speed quickly and loudly. The result was intermittent, wildly oscillating fan noise. In general, however, the fan was not audible because it was not on.

Maybe. If you are after pure performance in an acceptable package, the Chromebook Spin 13 will satisfy, though I think the Wacom digitizer might be lost on most customers. On the other hand, artists that want a Chromebook as a tablet would need to overlook the design issues that can impede tablet use. This is an impressive product, but it's covered in nits to pick at, feeling simultaneously premium and cheap in the sort of way only Acer can pull off. 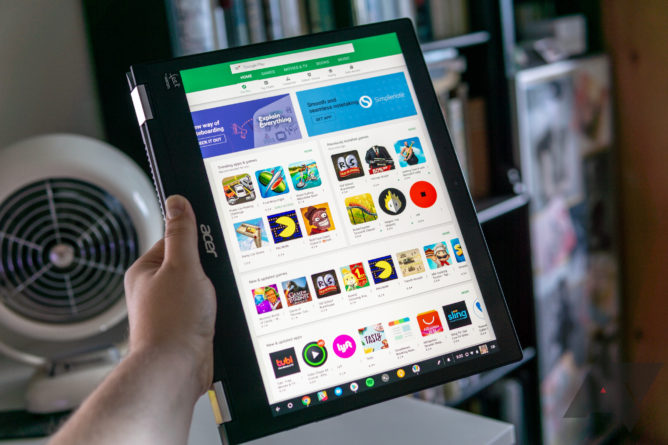 We're told that the Chromebook Spin 13 is mostly being marketed for corporate sales, which is both expected given the details of its shortcomings, and unfortunate given its strengths. Until someone else pushes out a Chromebook based on the Nami platform, Acer's Spin 13 handily takes the crown. But it's basically a win by default, a happy business-targeted accident easily supplanted by as-yet-unknown future "Nami" family Chromebooks.

All of the Chromebook Spin 13's small compromises would drive me insane, but if you're particularly flexible and accepting when it comes to the sort of issues I've pointed out, you could be quite satisfied with your purchase. The Chromebook isn't cheap, though, and I'd argue the benefits of a screaming-fast quad-core 15W CPU are lost on Chrome OS. From a certain perspective, $899 for a computer sporting one of these new quad-core CPUs is a good deal, but it's a sky-high price for a Chromebook, and not a lot of workflows can really take advantage of it.

If you need the fastest possible performance with Chrome OS, regardless of any other drawbacks, then the Chromebook Spin 13 could be your next laptop. Picky types should probably wait for the next big thing, though.

The Chromebook Spin 13 is now available at the retailers below: