During the Android Dev Summit 2018 that was just held in Mountain View, Google admitted something we all basically knew anyway: it may have been wrong to use so much much white in its apps as it drains smartphone batteries faster than duller, darker colors. Thankfully, dark modes can alleviate the problem and lead to better battery life, and Google wants more devs to add one to their apps.

Using an OG Pixel with an OLED panel, Google engineers ran some tests to see how much display brightness and color affects battery life. Unsurprisingly, there was a pretty linear correlation between display brightness and battery drain. More interesting was the fact that different colors cause different amounts of power usage, with white and then blue accounting for the biggest draw. 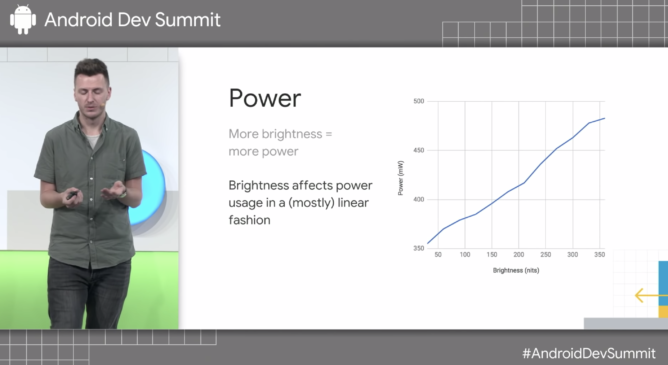 Googler Chris Banes went as far as to say they "kinda shot themselves in the foot slightly in terms of power" when they moved away from the mostly black Holo theme to Material Design and the heavy use of white as a base hue. Every recent Google app update we've covered has introduced seemingly more white space than ever before, much to the chagrin of commenters.

Banes went on to laud the introduction of dark modes, using the recent YouTube update as an example of the power benefits. This can save up to 43% battery usage during video playback and 60% when paused (with the phone set to 100% brightness). Even using a dark theme in Gboard can reduce power consumption significantly, by up to 21%. 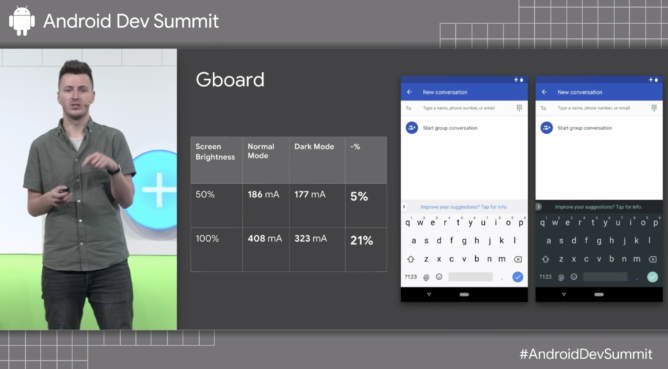 After Banes, Alan Viverette then took to the stage to talk about how devs should embrace dark mode and went into detail on how they can implement it. Hopefully, this indicates that Google will continue to add dark themes to its apps as it has done recently with Messages, Google News, and YouTube.

I recommend watching the whole talk below.

Another interesting tidbit from the session is that using Night Mode to filter out some of the blue light during the late hours can actually reduce power draw by as much as 63%, so it's good for your eyes and your phone's battery. The calls for a system-wide dark mode in Android have been deafening in recent years, and we can only hope this new information will inspire Google to finally give users what they want.

Hold your Pixel 3 close: You probably can't get it repaired right now [Update]