Verizon's prepaid service used to be of questionable value, but the carrier has aggressively lowered pricing in recent years. In 2017, it announced simplified, cheaper pricing for prepaid, and now it's making prepaid plans an even better deal with more date for fewer dollars. You can even get unlimited prepaid data for as little as $65.

The new plans go into effect today, and you can see them all below. 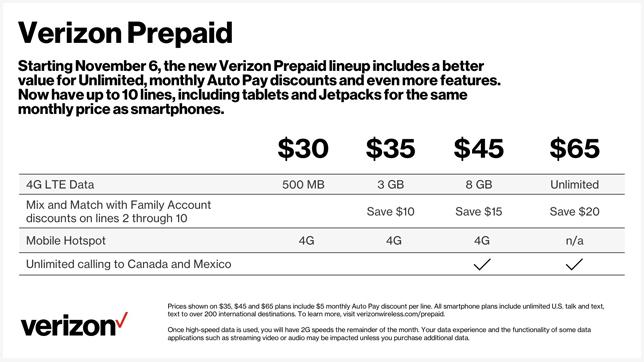 Previously, the prepaid plans came in 3GB, 7GB, and 10GB sizes for $40, $50, and $60, respectively. These new plans are a little cheaper and they offer more data. If you have multiple prepaid lines, you can get sizeable discounts with the new plans. For most consumers, this is a win. However, there are some caveats. First, those prices include a $5 auto-pay credit. If you pay manually, tack on another five bucks. You'll also be stuck with 2G speeds if you go over your monthly limit. You can buy more data, but it's expensive.

If you want hotspot, the good news is most of the new plans let you use it as much as you want at LTE speeds until your data cap is used up. However, the unlimited plan has no hotspot option, which seems profoundly strange. Verizon also does not explain if these plans have throttled video (the old plans were limited to 480p). We've reached out to Verizon to get clarification and will update if we hear back.

We've gotten confirmation from Verizon that its new prepaid plans do still have video throttling. You get 480p on phones and 1080p on tablets.