Flexible OLED displays are nothing new at this point. Various companies have been seen showing them off at various trade shows over the past few years without ever realizing an actual product that someone might want to buy. In a bid to be first, Royole just announced a very rough-looking model, and now Samsung is finally ready to admit it's developing a bendy phone.

While we've seen concept devices from the likes of Lenovo in recent years, Samsung's cards have been kept closer to its chest. That hasn't stopped the rumors (every, single, year) proclaiming that the South Korean tech giant was about to release something special. Samsung Mobile's change of Facebook profile photo to a folded version of its logo is the first time the company has officially acknowledged the existence of such a device. 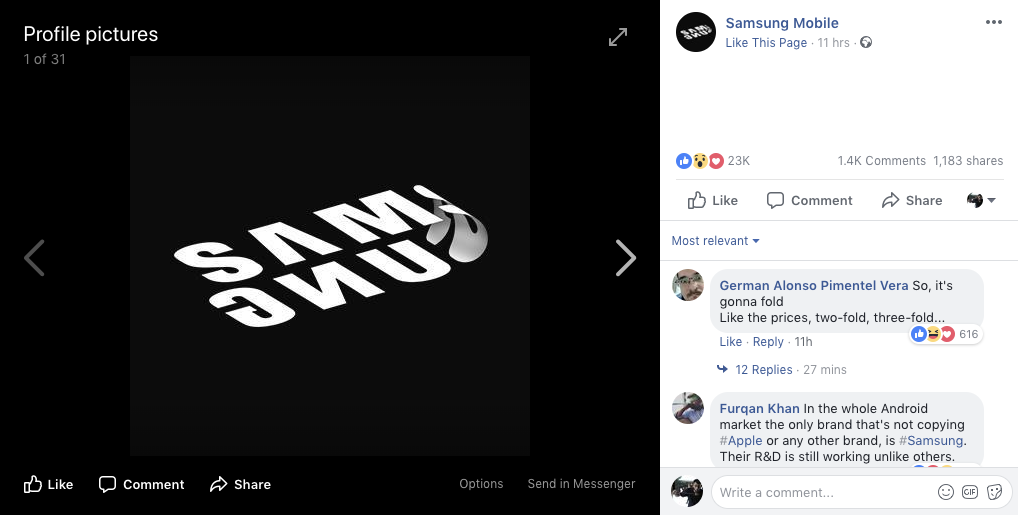 The most recent report suggested a December 2018 release date and with the timing of this teaser, that might not be out of the realm of possibility. We'll have to wait and see what happens, but I'd imagine we'll see a leak or two before anything is unveiled — watch this space.

Details about the design of the foldable Samsung device have emerged, suggesting it will have two screens. According to Korean site The Bell (view in Google Translate if the page won't load), the main display will measure 7.29 inches and fold inwards like a book, while a secondary 4.8-inch screen will be located on the outside, allowing for phone functionality when closed.

It's further alleged that Samsung Display will begin mass production on the panels this month, with the initial order not exceeding 100,000 units, possibly rising to as many as 1 million over the course of a year — that will depend on performance, however.