Google's Pixel Stand is a pretty nifty wireless charger - if an almost certainly overpriced one. Being a Google product, it's also not without its issues, and we've just had our attention drawn to a rather annoying one: the Pixel Stand just straight up breaks ambient display notifications on the Pixel 3 and 3 XL. We've been able to reliably recreate this bug with both devices.

Once removed from the Pixel Stand, the Pixel 3 and 3 XL will no longer display ambient notifications. Your phone will sound or vibrate when a notification is received as usual, but nothing will happen on the screen, even if always on ambient display mode is enabled. There's not much more to it than that, and the only workaround we've yet discovered is to reboot the phone, which reverts ambient notifications back to their normal behavior. But the moment you put the phone back on the Pixel Stand, it's going to break them the next time you remove it. 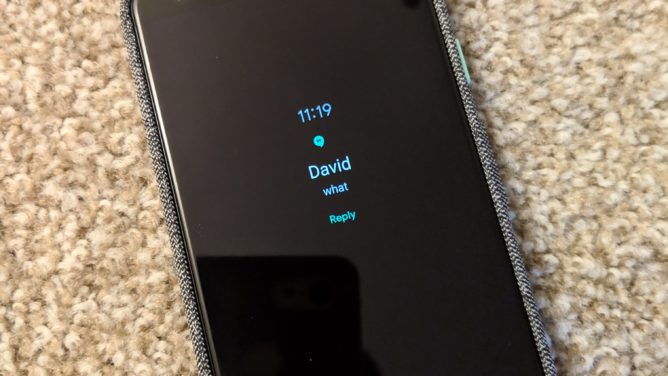 It's easy to see how a bug like this could get overlooked - many people may not rely on ambient notifications, and honestly, I wasn't even aware I wasn't getting them until someone pointed out in the comments of our bug post that this was happening. I just figured I wasn't looking at my phone soon enough, and then just kind of forgot they were a thing at all. Now, it's basically impossible to un-notice this problem. It's unclear how many users are affected, but I was immediately able to replicate it with both of my phones.

We've reached out for comment, and Google has confirmed it's looking into the issue.

Google has confirmed the bug exists and will issue a fix... eventually. A timeline was not provided, and the official statement follows.

We've seen rare instances in which notifications don't come through when Pixel 3 is docked on Pixel Stand. Restarting the phone can help as a workaround, and we'll be rolling out a fix for this bug in the future.

It's unclear if a system update will be necessary, or if this is something Google can fix on the back-end or via updates to various apps.