For as exciting as product announcements can be, especially when we're getting hands-on time with some brand-new gear, they also have the potential to be incredibly frustrating. At Google's October event, we got to meet devices like the new Pixel 3 and 3XL, as well as the Home Hub smart display — and it wasn't too long after their introduction that shoppers could take that hardware home. Sadly, the situation's a bit different for the Pixel Slate, and while Google went official with its Chrome OS tablet last month, it held back on talking about sales in terms any more temporally precise than "later this year." As we wait for the Slate to land, we just passed a major waypost on the path to retail sales, with the tablet showing off its certification docs at the FCC.

It feels like most of the time we catch wind of a product's FCC listing in the weeks and months leading up to its debut, as was the case with the Google Home Hub. Sometimes one or two morsels of useful information manage to squeeze past the confidentiality requests, but more often than not all we get is confirmation of band support.

With this Pixel Slate listing, we've already seen the product go official, so what's the big deal? Well, with no release date as of yet confirmed, more than anything this is a little reassurance than things are still on track towards a commercial release in the near future. It's far from a guarantee, but is nonetheless one of the boxes we need to check off along the way to a device ultimately becoming available. 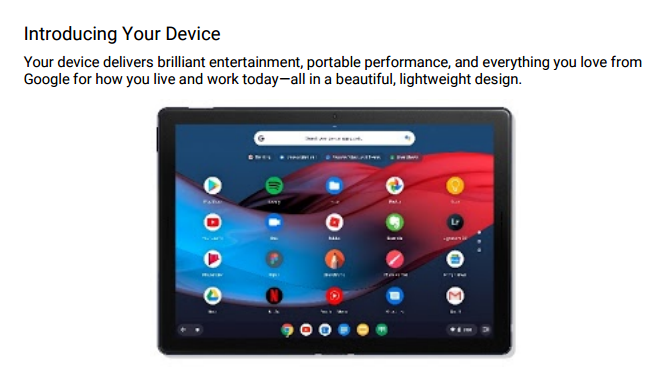 Probably the most interesting part of the FCC documents is an abbreviated user manual, offering a quick feature overview and setup guide for the tablet. Again, less interesting than it would have been prior to the tablet's formal announcement, but at this point we'll take what we can get.

As soon as we have any firm information to share on the start of Pixel Slate sales, we'll let you know.

Anker power accessories, including Type-C cables, batteries, and Qi fast chargers, are up to ...