Much less work is getting done at Google offices around the world today as thousands of employees have walked off the job in protest. At issue is the way Google handles sexual harassment claims, spurred by the recent news that Android co-founder Andy Rubin was paid a $90 million severance after another Googler accused him of harassment. The organizers hope this protest will draw attention to the issue and improve workplace safety and equality.

The protesters have a list of five demands, which you can see below.

We, Google employees and contractors, will walkout on November 1 at 11:10am to demand these five real changes. #googlewalkout pic.twitter.com/amgTxK3IYw

Employees claim that Rubin's $90 million exit package is evidence that Google cares too much about minimizing negative press surrounding accusations of sexual harassment. As a result, managers at the company are able to engage in inappropriate conduct. Meanwhile, regular employees who are harassed allegedly have little recourse against powerful higher-ups. 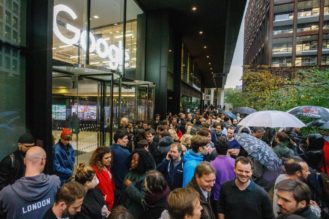 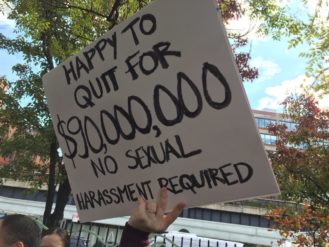 The walkout started in Google's Asian offices in Singapore and India at 11:10 AM local time, spreading to London, Dublin, and New York at the appointed hour. Employees posted photos and video of the walkout on social media, but it's unclear how much of Google's workforce participated. It is, at least subjectively, a lot of people. It's about to be a lot more, too. Google's HQ in Mountain View is just shy of 11 AM as of this posting, and employees there are sure to be joining the walkout in huge numbers.