Third quarter financial results are out for most of the big players in our industry, but whether Sony still fits that bill is questionable. They still have an ardent fan base, and our recent review of the Xperia XZ3 found it to be the best Sony phone in years, but still, the company's mobile division appears to be struggling.

As you can see from the table below, sales by Sony's Mobile Communications (MC) segment amounted to 54.2 billion Yen ($478.9 million) less than in the same period in 2017. If you're wondering why this slide refers to Q2, Sony figures correspond with the Japanese fiscal year, which is slightly different to the US — so where it says Q2, to us it means the third quarter. 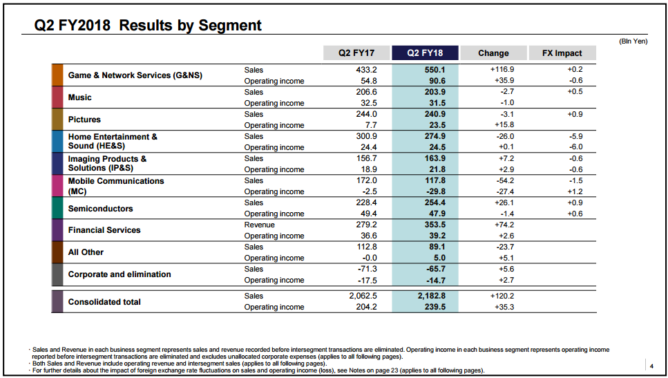 The slide below offers some more insight, highlighting poor smartphone sales in Europe, Latin America, and the Middle East. It also points to an operating loss of 27.4 billion Yen ($242.1 million) owing to the decrease in sales as well as an impairment charge against long-lived assets amounting to 16.2 billion Yen ($112.3 million). 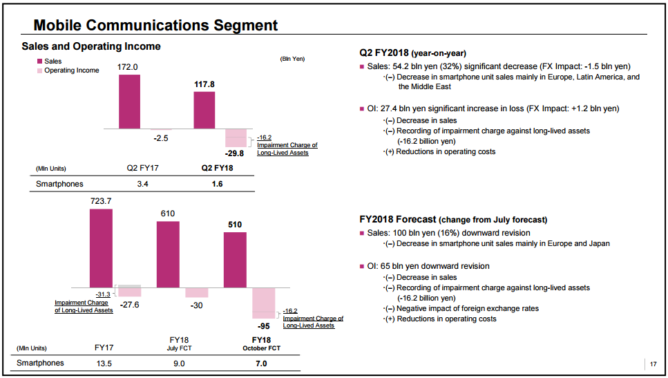 The bad news doesn't end there, sadly, as the forecast for the full fiscal year is only getting worse. Sony has revised its year-end expectation of sales down by 100 billion Yen ($883.7 million) and its operating income forecast is now 65 billion Yen ($574.5 million) lower. Exchange rates as well as lower sales in its home country, Japan, are also likely to have a negative impact, according to the company. It's worth noting that overall profits for Sony are strong, with PlayStation and Sony Pictures performing particularly well.