We've reviewed a few Android-based portable projectors in the past, like Anker's Nebula Capsule and the AAXA P2-A. The Optoma UHL55 is something else entirely. It's still a projector, and it still runs Android, but it's closer to something you would find in a high-end home theater.

Forget about the 720p resolutions and low brightness of other portable projectors — the UHL55 is 4K with a brightness of 1,500 lumens. It has all the features you would expect from a top-of-the-line projector, like full 3D and HDR support, multiple inputs, and Digital Light Processing (DLP). The UHL55 also has integration with Alexa and Google Assistant, so you can turn it on/off or change inputs with only your voice.

While the UHL55 has fantastic image quality, the Android app support is almost pointless and the Google Assistant/Alexa integration is extremely buggy. This is a great projector to pair with an external streaming box/media player, but at that point, you might as well get a cheaper 4K projector without Android.

Since this review, Optoma has fixed all the bugs I encountered with the Google Assistant and Alexa integration. Changing the volume, input, and other functionality now works. The app support still isn't great, but the projection quality is still extremely good and the promised assistant support now works.

Optoma refers to the UHL55 as a "portable projector," but in reality, it's about as portable as a gaming laptop. The unit weighs nearly nine pounds (4 kg), and doesn't have a handle like the Nebula Mars. The design is pretty standard for a home projector — it's a black square with a lens on the front, ports on the back, and air vents on all sides. 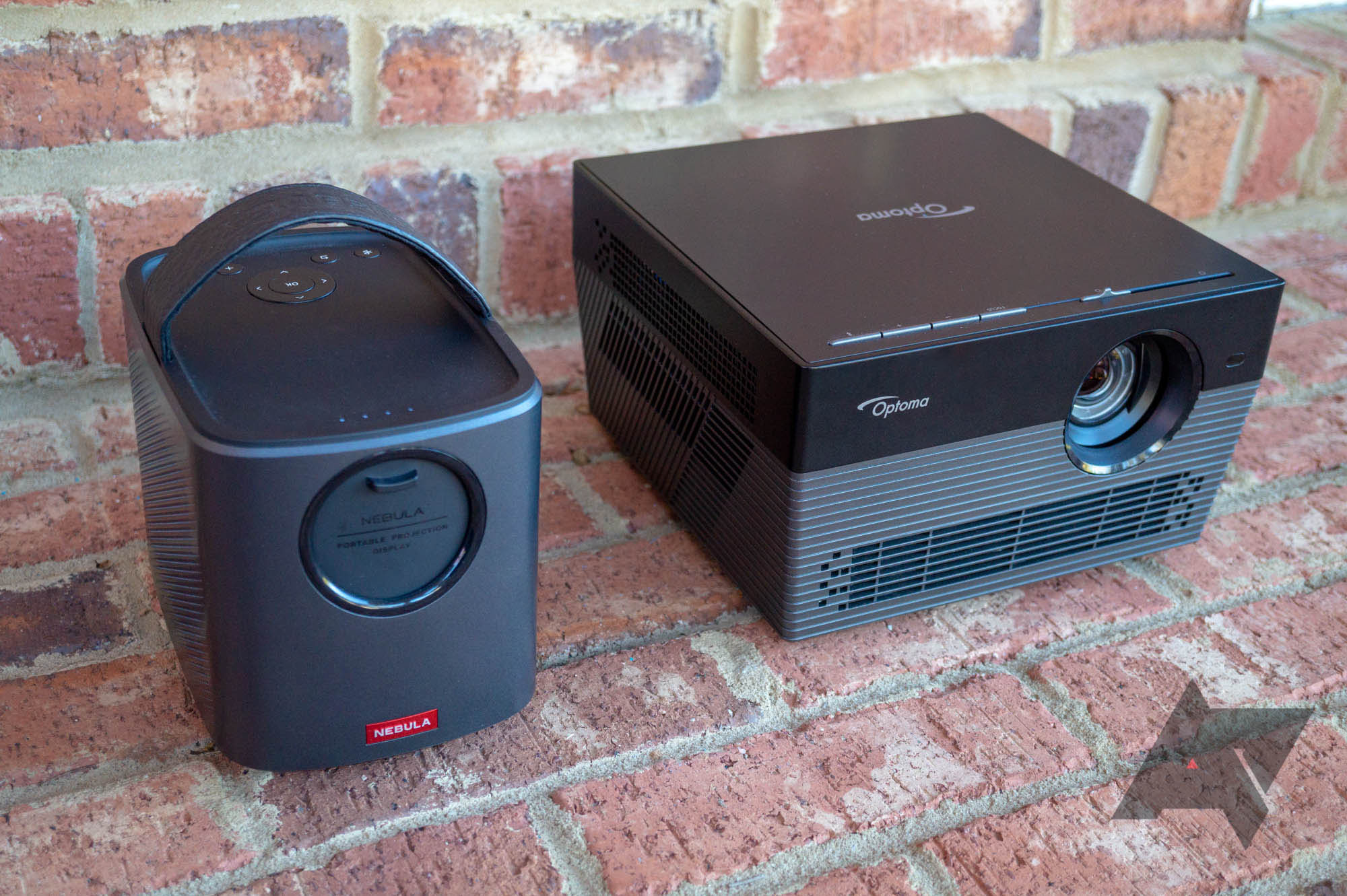 There are a few buttons on the top for audio mode, volume up/down, and projection focus. There's also a sliding mechanism that turns the unit on or off. I would have liked to see additional controls on the projector itself, like a directional pad. The remote uses 2032 cell batteries, which are included in the box. 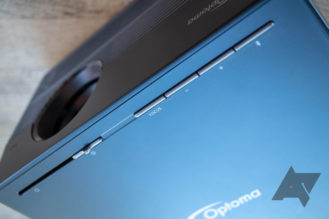 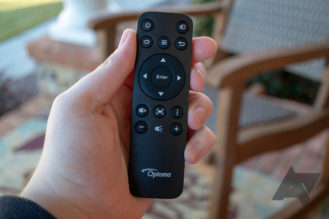 On the back are a total of nine ports, including two HDMI 2.0 connectors (with HDR and HDCP v2.2), an S/PDIF digital audio port, a headphone jack, two USB ports (one 3.0, one 2.0), an Ethernet connector, a Kensington lock, and a DC port for power input. 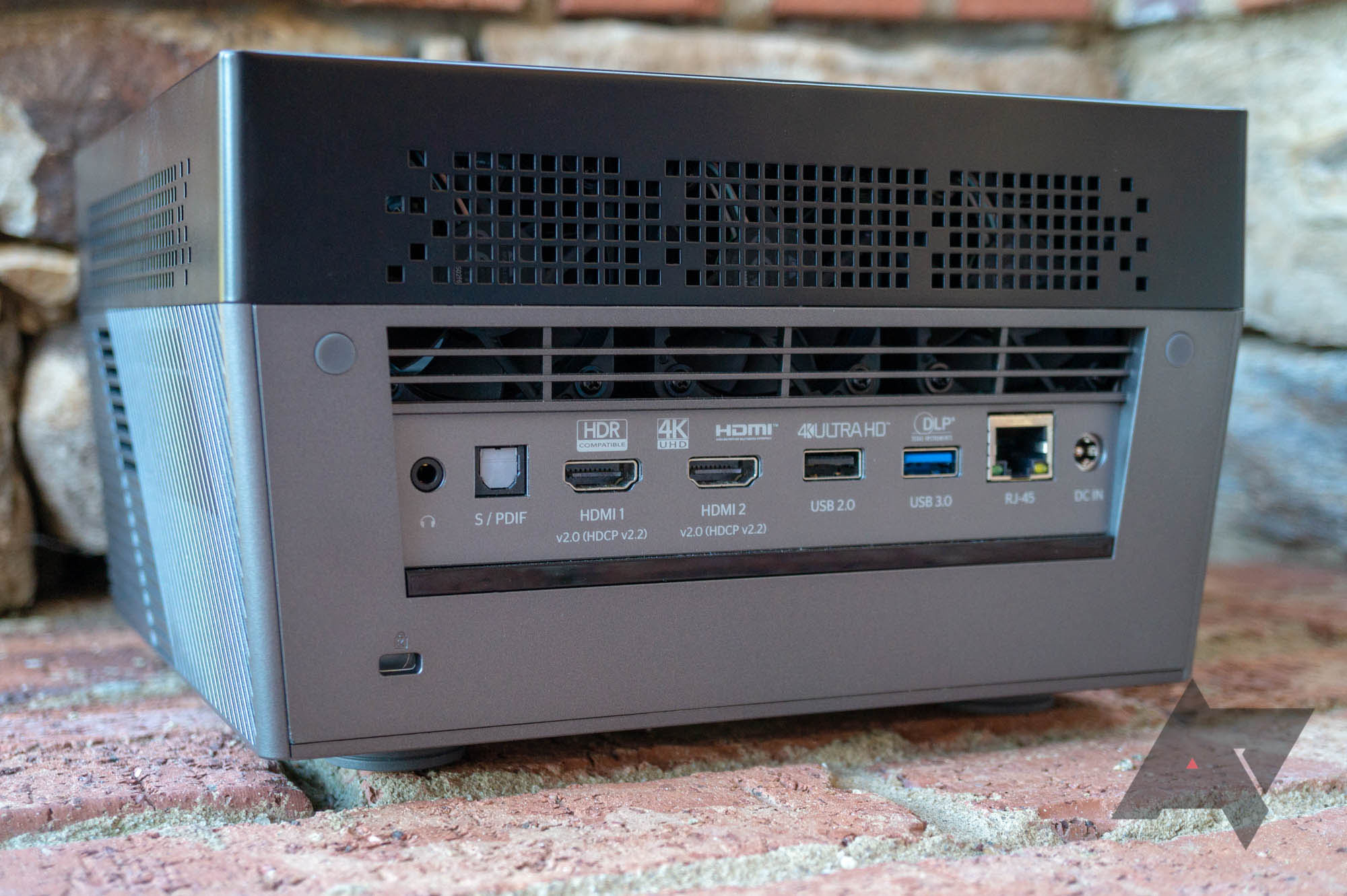 The internal hardware is standard for a home theater projector. The RGB LED lamp has a maximum brightness of 1,500 ANSI Lumens, and a lifetime of 30,000 hours in Eco mode (or 20,000 hours in Bright mode). Two 8W speakers are responsible for audio output, and music generally sounds fine — there's a decent amount of bass, too. Much like Anker's Nebula Capsule/Mars, you can switch the UHL55 into audio-only mode to use it like a Bluetooth speaker.

The projection quality is obviously the most important factor for a projector, and it's where the UHL55 undeniably shines. The 1,500 ANSI Lumen image is bright and vivid, especially at the maximum resolution of 3840 x 2160. With the right glasses, the UHL55 can even display 3D content (from either a 3D Blu-Ray player or a USB drive with a 3D video). 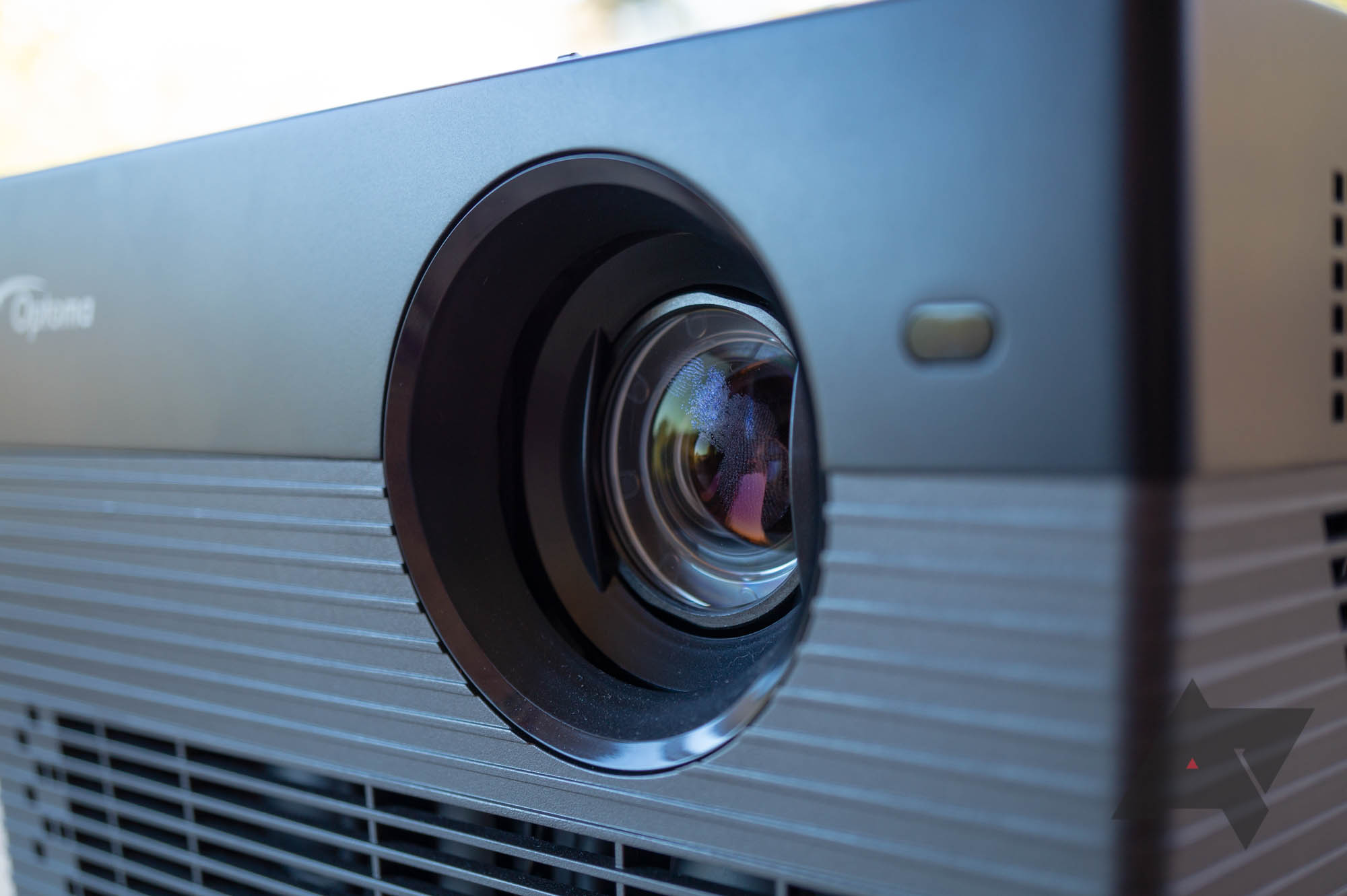 I'm reviewing this mostly from a software perspective, and I don't have other $1,000+ projectors to directly compare the UHl55 with. I can say that the image quality here is excellent, and it blows away the Nebula Mars II and other portable projectors. You can see the full technical specifications here.

The UHL55 runs a heavily-modified build of Android 6.0 Marshmallow. Optoma's custom interface is clean and simple to use, but it's not customizable at all. For example, you can't pin downloaded apps to the main Application menu — they're only accessible from the Apps submenu. 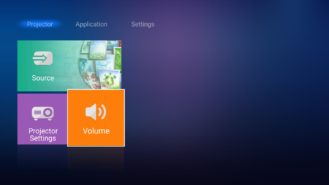 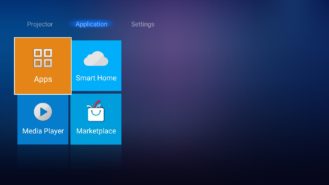 The main screen contains shortcuts for input sources, projector settings, and the volume. Some of the available image options include brightness, contrast, sharpness, color, and tint. There are also a few presets, like a 'gaming mode' that turns off all processing effects (to reduce input lag). 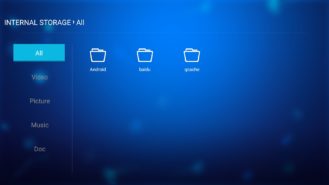 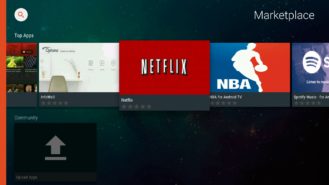 The pre-installed applications include 'Smart Home' (for setting up Alexa/Google Assistant integration) and the Optoma Marketplace. The included Media Player can open files from the internal storage, or from a drive connected to one of the USB ports.

The UHL55 doesn't have the Google Play Store, nor does it come with the Aptoide TV app store (which Anker's projectors have). Instead, you're stuck with the 'Optoma Marketplace,' which has a whopping nine apps right now. YouTube, Optoma InfoWall, Netflix, NBA, Spotify, Firefox, TED, CBC, and BBC are all you get. No Hulu, Amazon Video, HBO, Plex, YouTube TV, or any other media services. 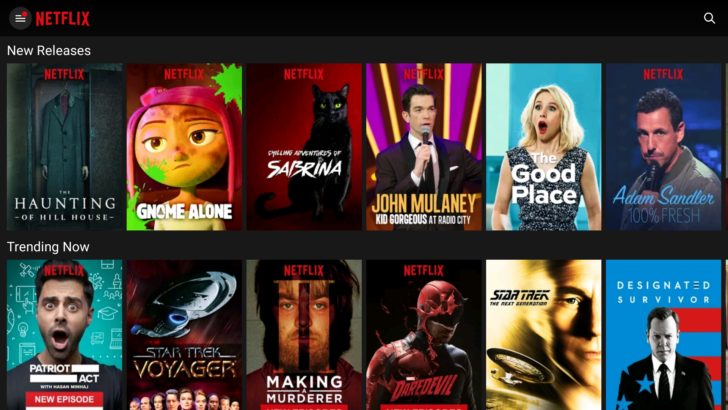 The Netflix app is the phone version, so it doesn't fully work using only the remote's directional pad.

It's strange that Optoma would go through the trouble of making an Android-based projector, and then only allow nine apps to be downloaded. You can still install APKs by copying them to a flash drive and opening them from the Media Player app, but that's a pain. I tried setting up the Amazon Appstore so I could download Hulu and other apps, but it was locked to portrait mode. 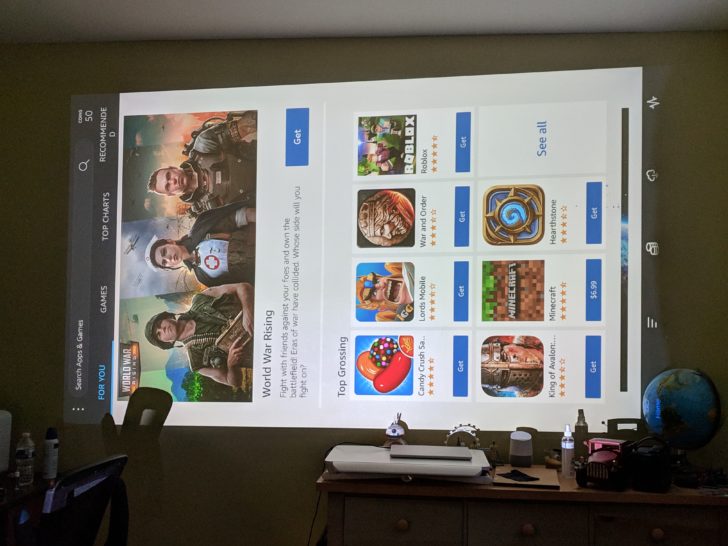 The Amazon Appstore is a no-go.

Even if you are willing to download APKs and load them onto a flash drive, there's another major problem — the UHL55 doesn't support Widevine DRM. Because of this, the Netflix app maxes out at 480p, and many other streaming apps behave similarly (or will fail to play at all). 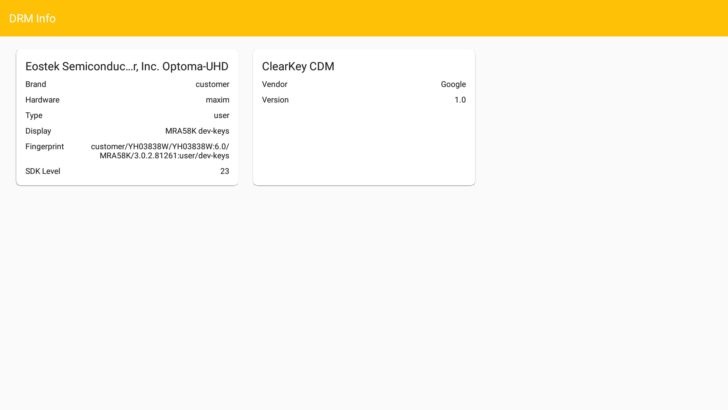 DRM Info on the Optoma UHL55 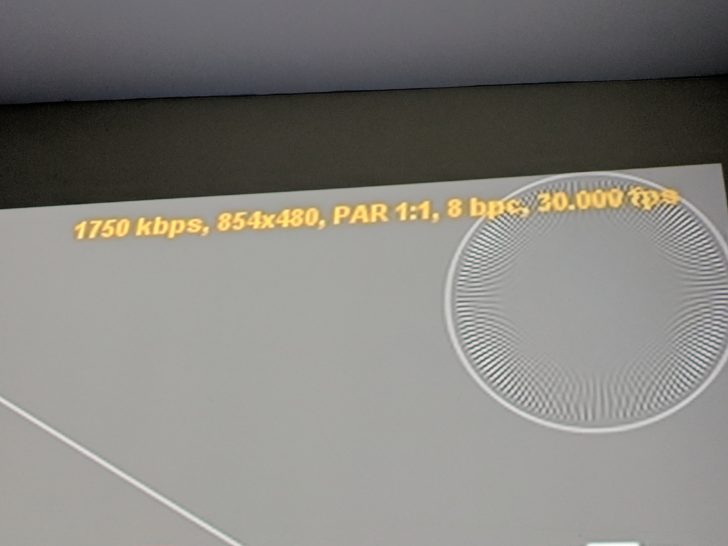 In summary, there's not really a point to having Android on the UHL55. Very few apps are available officially, and most media services will run at degraded quality. Unless you only need Plex or Kodi, there's no point to messing with Android apps at all.

One of the main selling points for the Optoma UHL55 is that it can connect to Google Assistant and Alexa. You can turn the projector on/off, change the volume, switch inputs, and more using only your voice. Unfortunately, the digital assistant integration is difficult to set up and doesn't work well.

Figuring out how to connect the projector to Google Assistant took me a while. First, you have to enable the 'Smart Home' power mode by pressing the remote's menu button and navigating to Projector Settings > Power Settings > Power Mode (Standby). Then you have to create an Optoma Devices Cloud account, and enter the serial number and pairing ID from the projector's 'Smart Home' app. The last step is to search for the 'Optoma SmartProjection' action in Google Assistant, tap the 'Link' button, and enter your login info. 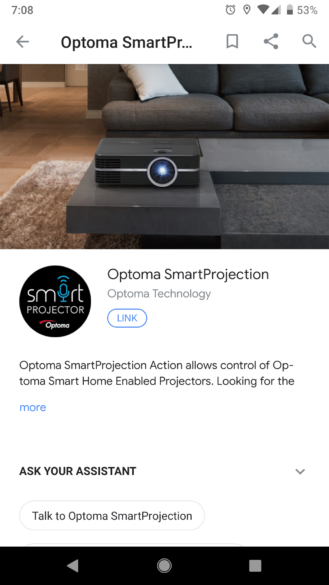 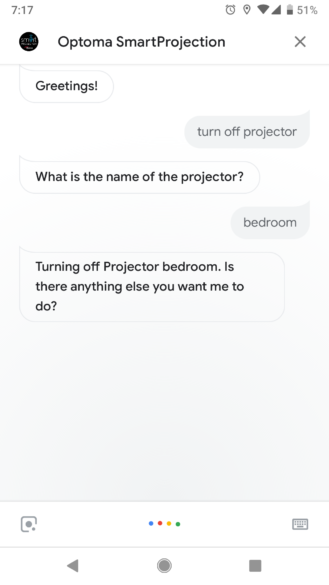 To get Alexa integration working, you need to perform the above steps, but substitute the Assistant action for the Optoma Alexa skill. With all of that done, these commands should be available from either Assistant or Alexa (via this datasheet):

Unfortunately, these commands rarely worked in my testing. The Optoma Assistant action would constantly tell me the projector was offline, even when the Smart TV app said it was connected and ready for commands.

Even when the commands did work, they were difficult to use. You have to first tell Assistant to "talk to Optoma SmartProject," then you can say something like "set bedroom volume to 4." You have to always refer to the projector by the name you chose on Optoma's website. Saying "Tell Optoma SmartProject to turn bedroom on" won't work either, at lest in my experience — if I didn't already have SmartProject action open, it would always ask again for the projector's name. 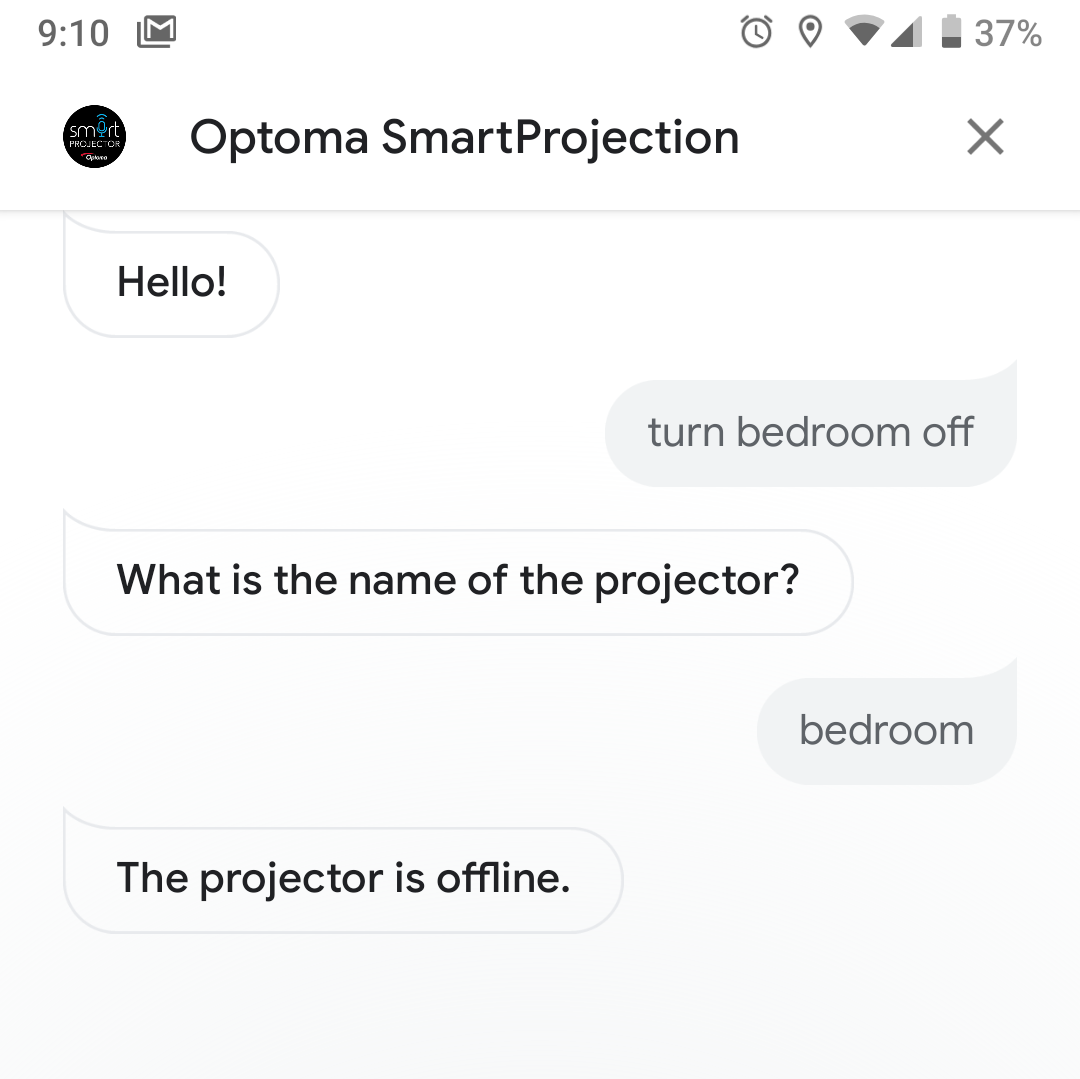 This happened a lot.

The Alexa skill isn't much better. If you modify the projector's name from the Alexa app, the skill stops working entirely. You also can't add the projector to a routine. In summary, the projector's smart assistant integration is too buggy and clunky to be useful.

The product manager for the UHL55 reached out after this review was published, saying that some of the issues above are limits placed on third-party actions for Alexa and Google Assistant:

Changing the name of the projector in the Alexa App is not advised as it causes problems and the limitation on the names themselves are also dictated by Amazon. We experimented with custom names but it was ultimately unstable and when reported to Amazon, they advised to stick to the list of names they developed.

Regarding the Google Home/Assistant commands, the command structure for Google Home commands is very strict and must also be used as state in the command list. Thus, “tell Optoma” must be used with every single demand since this is the how the Google Action API is defined. 3 Similarly, the Smart Home VUI is dictated by Amazon, therefore if the Amazon Alexa actions are not stated in the command list, there can be issues in getting the projector to perform the command.

No. The Optoma UHL55 is a fantastic projector, with great image quality and decent built-in speakers. However, it falls flat in the two areas it's supposed to be unique in — smart home integration and Android app support. The voice commands are clunky and unreliable, and the Optoma app store is too limited to make the Android app support useful. 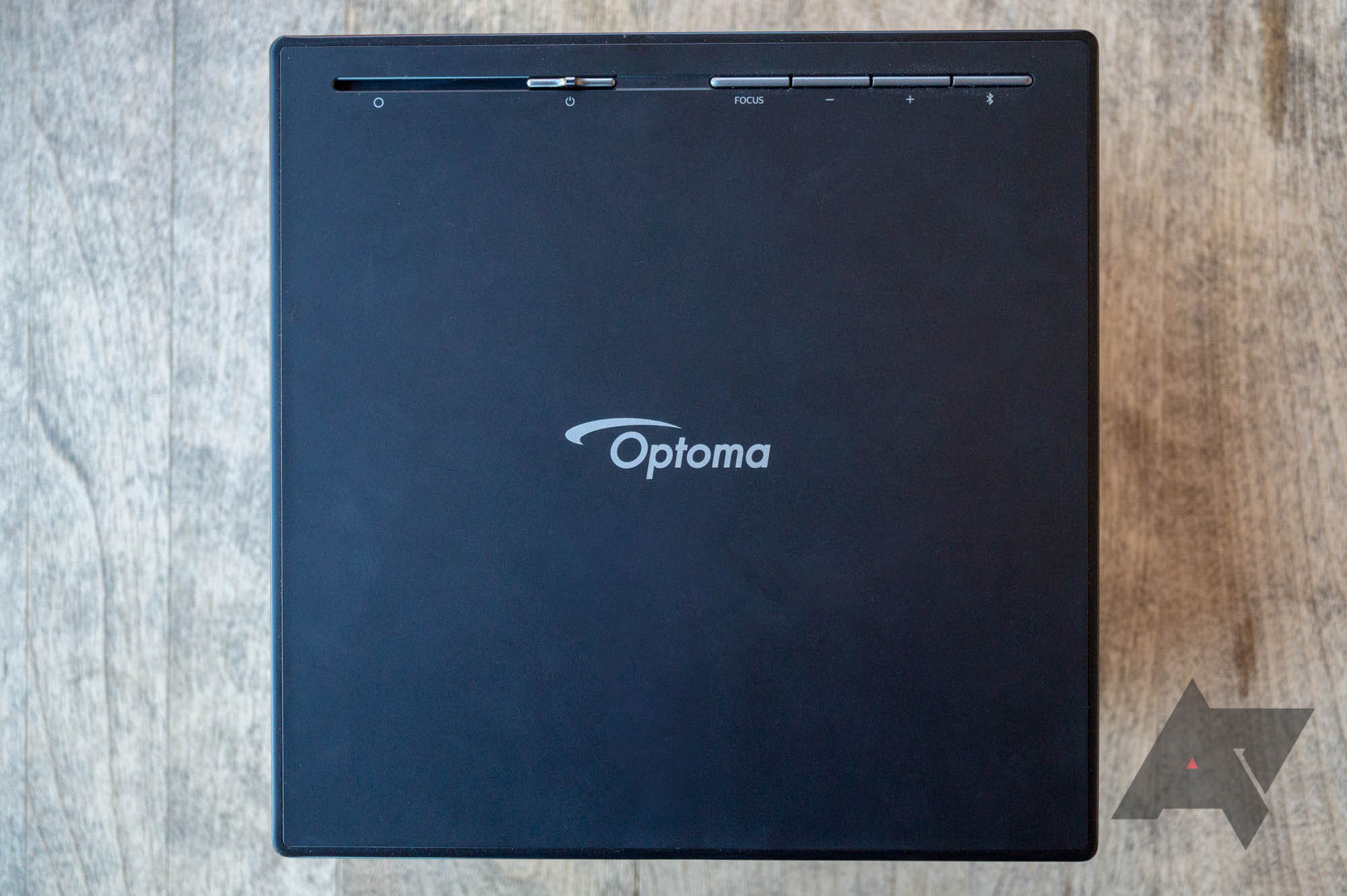 With the main selling points being mostly pointless, there's no reason you should get the $1.6K UHL55 over competing 4K projectors. Optoma's own UHD50 is similar in specifications, but is $300 cheaper. The ViewSonic PX747 is also capable of 4K playback at up to 3,500 ANSI Lumens, and it costs around $1,000. I haven't personally tried those projectors, but most of the Amazon reviews are positive.

In summary, you'd be much better off connecting a Chromecast Ultra to another 4K projector (and taking advantage of its great Google Assistant integration) than buying the UHL55.

Sony's smartphone division lost over $240 million last quarter, and it only expects things to ...