Google Maps keeps on rolling one change after the other. In October alone, we've seen the new Commute tab and music controls, overhauled hotel listings, star ratings on the map, EV charging stations, dish tagging, and more. But there's one more change that was spotted a couple of weeks ago that we would have missed if it weren't for our active tipsters: a revamped settings screen for navigation.

The new Navigation settings (under Maps' general settings) are more elaborate. They're organized into several sub-sections for Sound & voice, Route options, Map display, and Driving options, though several of the toggles and settings there aren't new, just moved around. A couple of options now include large buttons (sound volume and units), but it's the addition of a new Color scheme selector that interests us the most.

Previously, Maps switched automatically between day and night themes, going to the latter at night or when you drive into a tunnel or underground. Now, you can keep the automatic scheme or force the day or night ones all the time. So if you prefer a dark mode in all of your apps, you'll have that in Maps as well, at least when navigating. It won't affect the regular map and place listings. 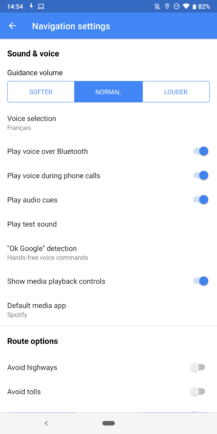 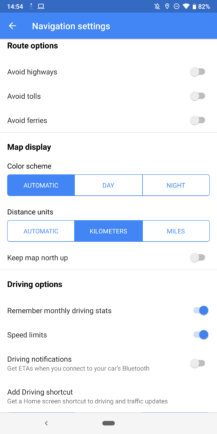 There are a few other additions too. Route options for avoiding highways, tolls, and ferries, are now showing up in this screen, while they previously could only be changed when looking for directions, before starting navigation. Also new is a toggle for audio cues, though I'm not sure what that does, and for showing speed limits.

You can see this changed Navigation settings screen in Google Maps 10.2.1 (APK Mirror), though it likely first showed up in a previous version.