At the company's event today in New York City, OnePlus has revealed its expected mid-cycle refresh. The new OnePlus 6T has most of the same internals as the 6, but swaps the rear fingerprint reader for a fancy new in-display model while sliming down its notch. The headphone jack is sadly gone, but battery size has been bumped up to 3,700mAh together with improved camera performance. Prices start at $549 with general availability set for November 1st from both OnePlus and T-Mobile. You can also use this referral link to get $20 off accessories if you buy a OnePlus 6T from OnePlus.

That's a bit more expensive than the OnePlus 6's 6/64GB model, but prices for other storage configurations remain the same. And note: Only the middle 8/128GB $579 configuration will be available on T-Mobile, and the carrier's signature store in Times Square will have the phone a couple days early, on the 29th.

On paper, one wouldn't be faulted for confusing the OnePlus 6 with the OnePlus 6T. It has the same Snapdragon 845 SoC, the same 6-8GB of RAM, and most of the same storage configurations, though the base model has been bumped to 128GB with an equivalent increase in price. Colors at launch are the same as last time (matte or glossy black), it still has the same glass-backed construction, and even the camera is unchanged. 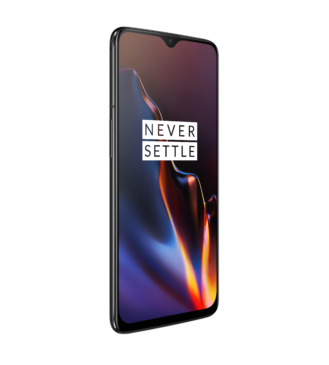 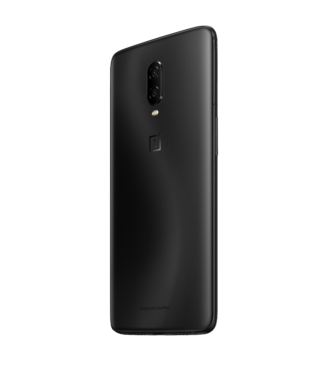 The only major hardware differences are the new optical in-display fingerprint reader, a slightly taller/bigger display, a bit of extra heft for the bigger 3,700mAh battery, the absence of a headphone jack, and the smaller teardrop-style notch — all small enough changes to merit the "T" modifier, rather than a new number outright. OnePlus delivers a handful of software improvements on the 6T, most of which we are told will be coming to the older OnePlus 6. Changes include improved camera performance, a Nightscape low-light landscape photo mode, and a new Smart Boost feature that more intelligently manages memory for app multitasking,

OnePlus is also launching the 6T with Android 9 Pie, making it the 2nd major OEM in the US after Sony and outside Google to release a new phone with the latest version of Android. Verizon compatibility is also expected (and somewhat explicitly stated, given band 13 compatibility).

OnePlus is also revealing a new red color for its Bullets Wireless headphones, upcoming equalization controls, and a new backpack that's bringing back the invite system.

For more detailed information about the OnePlus 6T and our own subjective assessment, look forward to our review.

Unlock the Speed with the OnePlus 6T

Screen Unlock on the immersive 6.41-inch Optic AMOLED display, class-leading hardware and meticulous industrial design create the industry’s fastest and smoothest smartphone experience
New York – October 29, 2018 – OnePlus has announced its latest premium flagship device, the OnePlus 6T.
Featuring Screen Unlock, the industry’s fastest in-display fingerprint technology, the OnePlus 6T provides users with a fast, natural and intuitive way to unlock your device, while benefiting from a large display with minimal bezels. Taking just .34 seconds to unlock and supported by sophisticated self-learning algorithms, Screen Unlock sets a new standard for smartphones.
“We constantly challenge ourselves to give people the best experience possible, to do what’s right, no matter what,” said Pete Lau, founder and CEO. “A great user experience means your phone needs to get out of the way and make you feel free – it has to enhance your life instead of distracting you from it. I’m so proud of what we’ve built with the OnePlus 6T, and can’t wait to see what people think when they use it.”
Immersive Display, Meticulous Design The OnePlus 6T has a rich and immersive display, with a 6.41-inch Optic AMOLED display at a 19.5:9 aspect ratio for great viewing angles whether you’re playing Fortnite or watching Netflix. As durable as it is beautiful, the front of the OnePlus 6T is protected by the latest Corning Gorilla Glass 6, seamlessly flowing into the glass design.
Over 40 different manufacturing steps go into crafting the 3D glass back of the OnePlus 6T, which is made from multiple layers of glass, it includes anti-glare coating and a texturized multilayer film.
Fast and Smooth Fast and Smooth is not just about raw processing power, but about the optimization of hardware and software.
The latest, most powerful platform, Qualcomm Snapdragon 845, with up to 8GB of RAM, creates an experience that continues to set the standard for performance.
Smart Boost, a new feature of the OnePlus 6T, improves app cold start speeds by up to 20 percent through storing data from frequently used apps in the phone’s RAM.
And when you need more power, OnePlus Fast Charge can quickly charge the OnePlus 6T’s 3,700mAh battery, which provides a 20 percent increase in battery life compared to OnePlus 6, for a full day of power in half an hour.
Introducing Nightscape The OnePlus 6T enhances the acclaimed camera experience of the OnePlus 6 with software optimizations and added features.
The new Nightscape is perfect for capturing low-light urban environments with improved clarity, less noise, more accurate color reproduction and better dynamic range.
Working with critically acclaimed photographer and artist Kevin Abosch, the OnePlus 6T’s rear camera features Studio Lighting, a feature that has been fine-tuned to recognize faces and adjust the lighting accordingly to simulate professional lighting.
Industry-leading HDR and portrait mode images are also improved, thanks to the clarity, dynamic range, and edge detection provided by OxygenOS. The OnePlus 6T rear cameras can capture 4K video footage at 60 frames per second, and Super Slow Motion at 1080p and 240fps / 720p and 480fps. Google Lens is also included as standard in the user interface.
The camera hardware sees a combination of f/1.7 16 megapixel and f/1.7 20 megapixel rear-facing cameras, featuring Optical Image Stabilization and Electronic Image Stabilization, while the front-facing camera is f/2.0 16 megapixel, with Electronic Image Stabilization.
The OnePlus 6T will be available in Midnight Black and Mirror Black from November 1 on OnePlus.com, starting at $549. U.S. customers will also be able to purchase the OnePlus 6T on T-Mobile starting on November 1.
------
About OnePlus OnePlus is a global mobile technology company challenging conventional concepts of technology. Created around the “Never Settle” mantra, OnePlus creates exquisitely designed devices with the premium build quality and high-performance hardware focused around user experience. OnePlus thrives on cultivating strong bonds and growing together with its community of users and fans. For more information, please visit oneplus.com.