Android Police has a fantastic community. The comments on our articles and YouTube videos are almost always filled with great discussions, and the live back-and-forth with viewers on our weekly Twitch shows is enjoyable. The amount of interaction we get on most of our posts is unparalleled for a site of our size, and we are very grateful for that. That being said, we want to address some negative things we've observed as that community has grown, and explain what we are going to do about them.

Recently, we've seen a dramatic increase in the number of openly hostile comments on AP. These tend to fall into one of two categories. The first is personal attacks (which we hope everyone understands are not OK anywhere). AP has always had a zero tolerance policy on hateful, bigoted, or otherwise hurtful remarks made by one person to another - be it another commenter or the author of a post. That isn't changing, and we will be enforcing that policy more rigorously going forward.

The second, though, is a newer one for us, and one we feel obligated to confront. On the web, a certain kind of comment content "gray area" has emerged in recent years, and it's making our conversations unnecessarily toxic. It's called discussion hijacking (which is essentially just trolling), and we're going to be deleting comments we feel hijack the discussion from here on out. What does it mean to hijack the discussion, exactly? One example is an angry remark that, while technically "on topic," doesn't actually add anything to the discussion but vitriol. Replying "fuck the notch!" in all caps on any article about a phone with a notch is not helpful. And yes, someone was actually doing that. 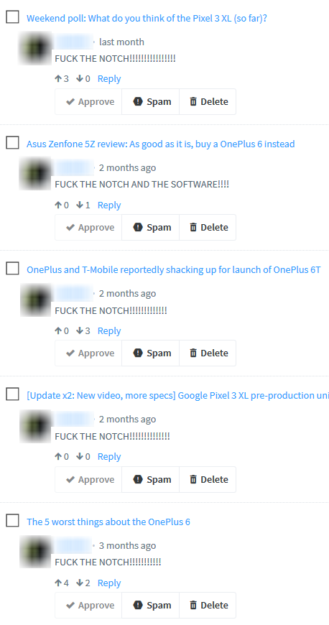 Don't be this person.

Another example hijacking we've frequently seen—likely because of growing political unrest in the United States (home to over 40% of our readers)—is shifting the discussion to completely unrelated political topics. To show you what we mean, the below comment was left on a post about a Pixel 3 bug:

This commenter clearly is attempting to start a fight, not engage in a discussion of the post topic. Comments like this are no longer going to be tolerated. Another example: this comment on a post about new Android license fees in the European Union, where someone randomly decided to complain about welfare in Sweden. It's not as obvious in its baiting as either of the first two, but the intent is clear: to hijack a discussion of the post topic and turn it into a bad faith mud-slinging match about socialism.

Finally, in case you're thinking it doesn't get worse than this: it does! This comment was on an article about Verizon's Pixel 3, which actually prompted us to write this post.

Bonus: This person threatened us when we banned him.

These comments don't contribute to the discussion at all — they hijack the discussion and (oftentimes, purposefully) attract hateful responses from people with opposing views. Even worse, these types of comments can chase away people who actually want to discuss the article's topic. On a few occasions, we've seen comment threads where a handful of people go on arguing and exchanging insults for several days after the original post was published.

We're not launching some broad censorship campaign — disagreements, relevant political comments, and general silliness are not being banned. However, we will be evaluating the intent of questionable comments and deleting the ones we think are making the discussion toxic. While we like to consider banning a last resort, anybody that has to be moderated regularly may be banned without notice. Commenting here is a privilege, not a right. If you're wondering whether what you're commenting is "appropriate," ask yourself a simple question: If everyone you worked with, your family, and your friends could all see the content of that comment under your real name, would you still post it? (Obviously, that's not going to work for every situation, but it's a good place to start.)

Moving forward, we will be more proactive about banning people who engage in the following behavior:

We won't ban anyone on a first offense, only those that repeatedly perform the above actions. The previous rules about no spamming and no impersonating staff still apply. And, generally speaking, if everyone could be a little more pleasant and less combative, it would make our lives easier and reduce the amount of unwanted behavior in the comments.

As a final note, most of the problematic people we've seen have private Disqus profiles. We can still see all of a given user's comments on Android Police through the Disqus admin panel, so don't think that a private profile will keep us from checking past comments.

By highlighting inappropriate behavior and cracking down on similar comments moving forward, we hope that our comments section will stay a fun and engaging place for the tech community. If you have questions about the policy, leave them on this post (questions of whether a given comment is appropriate will not be answered, and if you really have to ask, you probably already know).