Google Photos started rolling out Live Albums a couple of weeks ago. The feature, while simple in that it lets you automatically add faces to albums, is a little more complex than that. In this article, I will explore a few of the intricacies of Live Albums and help you make the most out of the feature.

In order for Live Albums to work, you need to have photo backups and face grouping enabled in the Google Photos app. Open the app, slide out the side menu from the left, and go to Settings.

First, head over to Back up & sync and turn it on. Choose the account you want the photos to be backed up to, and the quality you want them to be uploaded in. High quality is often more than enough, and Google offers you unlimited free storage at that setting.

Second, go back to the main settings page and look for Group similar faces. Depending on where you live, your state or country may have prohibited face detection and grouping. If you don't see the option, you're likely affected. (There are ways to circumvent this with a VPN, but I won't get into them here.) Turn on Face grouping and, if you want pets to be recognized as well, you need to toggle on Show pets with people too.

Once these two settings are in place, you need to wait for your photos to be uploaded and faces from them to be recognized and categorized.

In the Photos app, head over to the Albums tab on the bottom and look for the + in a large white square titled New Album. Tap on Automatically add photos of people & pets and you'll be taken to a screen where you can select all the faces you want to show up in your album. 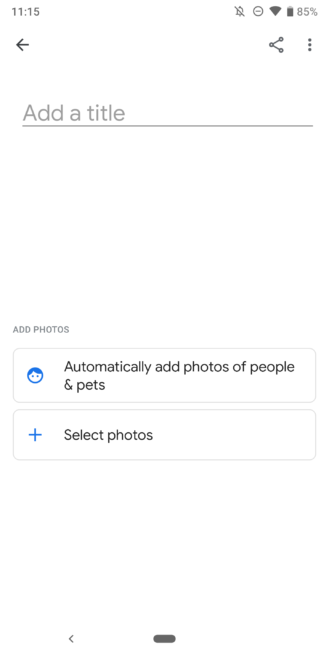 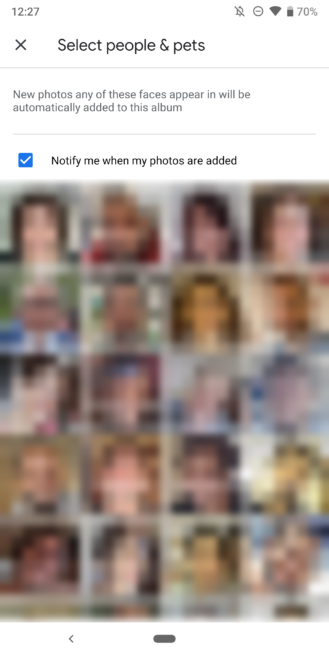 Use this method for:

If you'd rather create a Live Album with a fresh start, where only new photos taken from now onward will be added, you can do that as well. 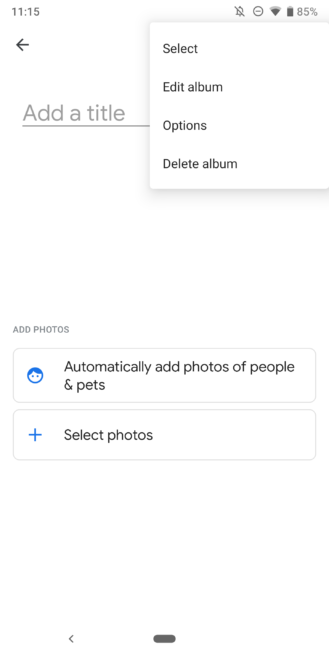 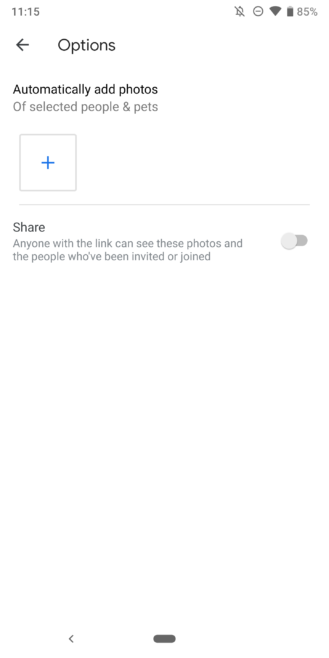 Now, the screen will look identical to the one in the section above, but there's a tiny difference. Here, the checkbox isn't for being notified of new photos being added, it's for choosing whether or not you want older photos to be included as well. If you want a fresh start album, you have to leave that box unchecked. In the comparison screenshots below, you'll see the difference between the screen in this case (left) vs when creating a Live Album with older photos (right). 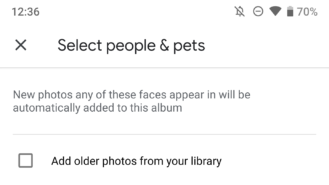 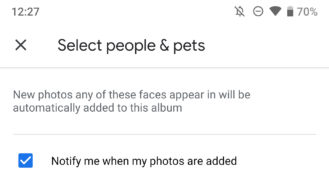 When done, this will make an album that has all the newly uploaded photos of any of the faces selected. Existing photos do not show up (if you left the box unchecked). All new photos with these faces will be added automatically.

If you have already started curating some albums with specific people or pets, you can easily transform them into a Live Album so that any newly uploaded photo involving those faces gets automatically added.

To do that, open any album you already have in Photos, tap the overflow (three dots) button on the top right, and choose Options. There, you can select any faces you want to be added from now on. You will also get the checkbox for adding older photos or not, just like in the case above. Make that decision wisely and on a per-case basis. 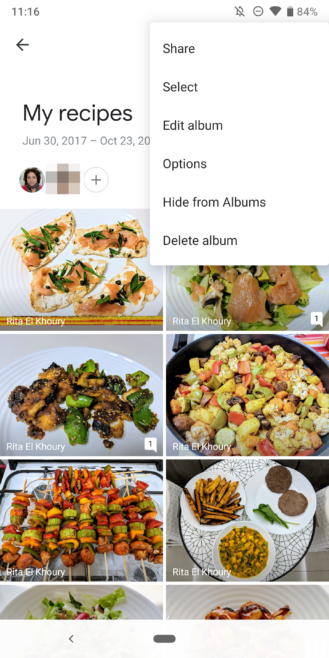 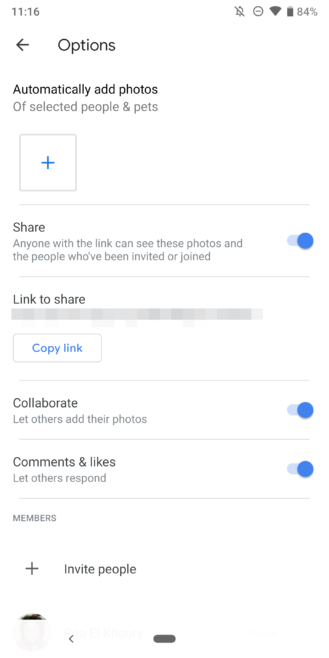 Live Albums aren't magical. They are like any Google Photos album, so you can still sort them, rename them, add text and locations, and share them. But, for the purpose of this article, the most important thing to keep in mind is that you can still manually add or remove photos from Live Albums, and thus curate what gets shown there. (Beware though that if the album is shared, new pics are added to it automatically, so the other person may be able to see something before you remove it.)

You can use manual removal if you find it easier to create a Live Album automatically, then remove some select photos that don't belong there or that you'd rather not show. It's simpler than manually selecting all the photos from the start. To do this, make a Live Album then select the unwanted pics, tap the overflow, and remove them.

You can use manual adding if you think there are some photos that belong in the album but aren't there, either because the face wasn't correctly tagged, or because they're relevant to that person/pet but don't have their face in it. Maybe it's your pet's vaccine card, or your friend's favorite restaurant/dish — if it belongs there, you can add it.

Other people can add their own photos to Live Albums

When you share a Live Album, just like any regular album, you can turn on collaboration. If you do so, those you've shared the album with can add pics to it. They can either do that manually or, in the spirit of Live Albums, they can also automatically add faces to it. On their devices, this allows them to choose the faces that belong in that album, as well as check the option to add older photos too or just newly uploaded ones. 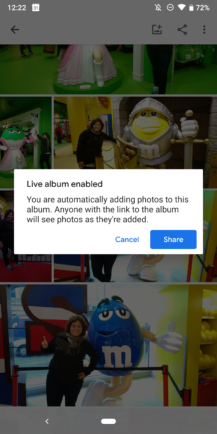 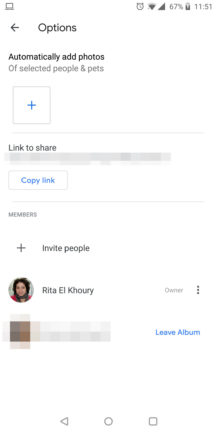 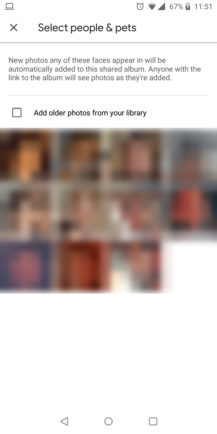 While having Live Albums with collaborations from multiple users may go to hell very easily, the option can be super handy for families and small tight groups of friends. Imagine parents sharing a Live Album of their kids. Any photo either of them takes will be added. Sure, mom will know that dad took little Johnny to the Lego store and they spent three hours there, but she will also have all the adorable pics they took with that large Darth Vader Lego statue. So, you know, pros and cons.

Archive photos you don't want to see in any Live Album

There's always that one photo (or maybe more) that will show up in Live Albums even if you don't want it to. Maybe you don't want to delete it because it's important to keep, but you have to remember to manually remove it from any Live Album you create where it might show up. In that case, archive the photo. It will still be in Photos' Archive, but it won't show up in the main stream or in any album.

Live Albums can be shown off in Ambient mode on a Chromecast, a Smart Display, or the Google Home Hub. To see how to set that up, check our previous tutorial.

Live Albums are still a new feature in Photos. While I would love to see more options to create smarter albums, like "and/or" selectors for faces, date and location restrictions, and other rules, as well as a larger limit than 10,000 pics per album, it's quite a neat feature and I'm looking forward to its evolution.

Google's ARCore additions for October include the Pixel 3, LG V40, and more

10 new and notable Android apps from the last week including Blizzard Esports, Heritage ...