Google's Nearby API has been available for years and had simplified a lot of close communication between devices, but you'll probably have forgotten about it unless you've ran across its notifications. In Lebanon, some malls and stores use beacons to broadcast notifications to passersby, and so far, the situation has been more or less tolerable. However, it seems some places were abusing the API to bombard users with spam, and so the Nearby Notifications feature is being shut down.

The team says that its original idea behind Nearby Notifications was to alert users to useful features around them (free WiFi, transit info at bus stops, guides in museums, and so on). However, an increase in irrelevant and spammy content was noticed at the start of the year, so they've decided to discontinue support for the API. Starting December 6, 2018, you won't get any notification from Nearby anymore. 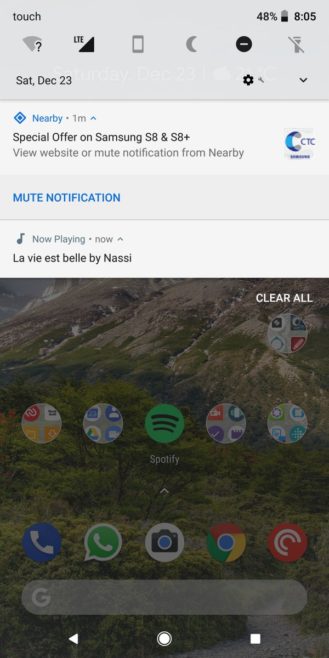 I will file this as another example of "this is why we can't have nice things." While Nearby Notifications' powers could have been used for good, spam and ads overrode the system once people realized they could use beacons to send a notification to every passing device. Sure, users could disable all link notifications or mute certain sites, but this wasn't a nice experience to begin with.

However, this is not the end for Nearby. The API still has two other aspects with Messages and Connections, so if you're a developer invested in creating experiences that rely on those, you're in the clear.

[Update: Models] Android Auto is coming to Mazda cars with MZD Connect next month in Europe