The Earin M–2 ($249) and Master & Dynamic MW07 ($299) were both premium products with hefty price tags, but now it’s time to try something a little easier on the wallet. AI company Mobvoi is best known for its TicWatch smartwatches, but it has previous experience with audio, too. The TicHome Mini is a decent battery-powered Google Assistant speaker, giving me hope that the TicPods Free would also impress. At $129.99, they’re significantly cheaper than a lot of other options out there, even undercutting the ubiquitous Apple AirPods by $30. They raised 5,362% of their Indiegogo campaign goal ($2.8m), so let’s see if the 22,615 backers made the right call. 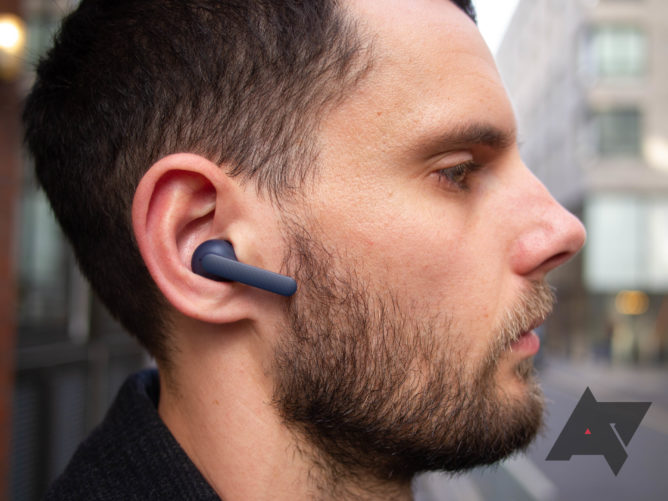 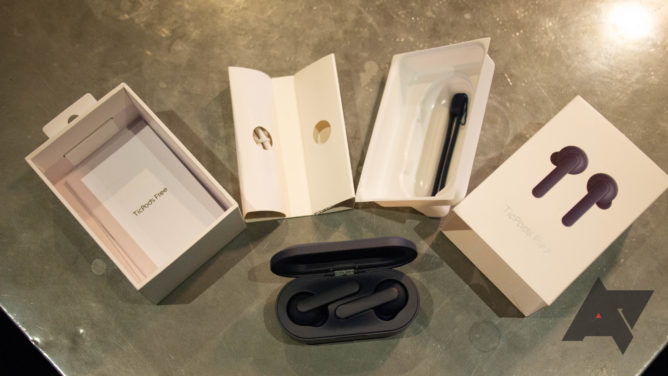 So let’s get this out of the way first — the TicPods Free design inspiration clearly comes from Apple’s AirPods, something that is especially apparent if you go for the white model instead of blue or red. There are some practical reasons for this, however, such as the touch controls and microphone placement. To me, the TicPods are attractive, and I appreciate the matching raised lines on the earbud stem and the lid of the case. Of the three colorways available, I’m most enamored with the navy number I’ve been using — it’s a nice change from black. Another reason I don’t mind the stem is that I actually think it’s important that people can see you’re wearing earbuds and are not ignoring them or being rude on purpose. 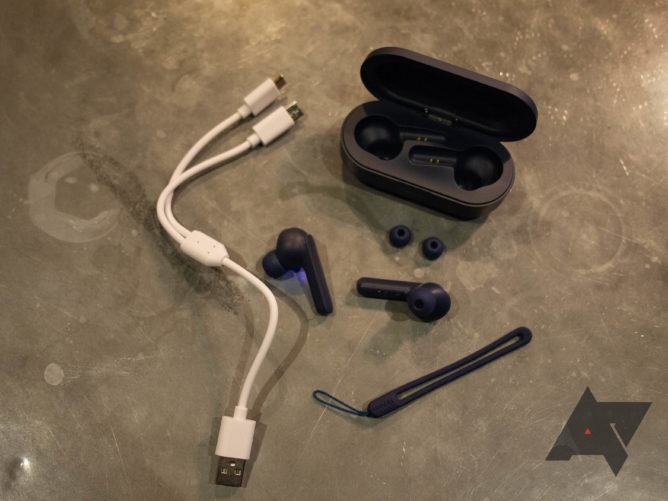 The case is fine, although I do think the lid hinge could be a bit sturdier. It feels like it could snap off with one false move, but it’s hopefully more durable than it seems. The case is smaller than those offered by other manufacturers, so it should have no trouble fitting in most pockets. In the retail box, there’s also an included loop strap and a short charging cable that curiously has both a USB-C and Micro-USB end (which the TicPods’ case uses) opposite the USB-A. It’s one way to solve the “I only want to carry one cable” problem, I suppose. There was only one set of spare tips, in a smaller size, so you’d better not lose the larger ones if they fit you best. I would rather have foam ones, but it’s not a glaring omission at the price. 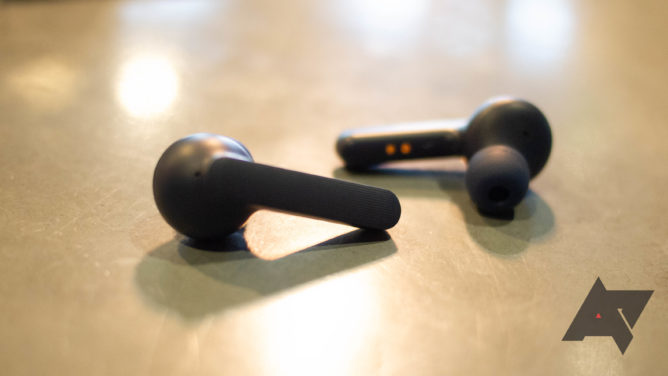 I’m pleased to report that the TicPods tick most of the feature boxes. The fit and isolation are good, passive noise cancellation works to filter out a fair amount of other sounds, and they are splashproof (IPX5). They also have touch controls. I actually prefer the tactile nature of physical buttons, but touch is the prevailing choice among manufacturers so I had better get used to it.

Mobvoi’s controls are sadly more difficult to use than other earbuds. Swiping up and down on either bud changes the volume. On both earbuds, double tapping skips songs and answers/ends calls, and long pressing rejects a call. Long pressing can also pause/play on the left bud, or summon the voice assistant on the right bud (Google Assistant, Alexa, or Siri — that’s right, they work with iPhone too). There is a learning curve with these controls, and I think that could have been avoided by having volume sliding on just one side, allowing for single taps on the other side and general simplification. 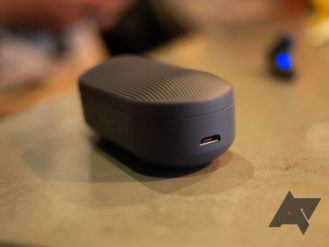 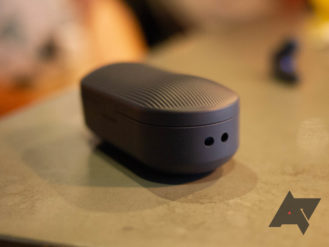 MicroUSB charging is a minor complaint for me, but it will bother some people more.

Sound quality is always the most important factor when judging an audio product, and the TicPods are pleasantly surprising. The sound is relatively well balanced, although a little lacking in bass. There’s plenty of detail, and while they can’t compete with pricier competitors, I don’t think a non-audiophile would have too many complaints about the sound profile. I should note the volume is lower than other models I’ve recently reviewed. They’re rated at 95 decibels, however, which is above the recommended listening level, so this probably suggests I usually listen to my music too loud. 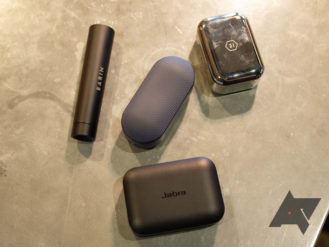 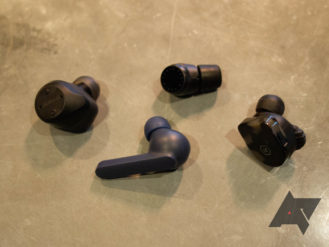 TicPods next to the Earin M–2, Jabra Elite Sport, and Master & Dynamic MW07.

Other features that need mentioning include AAC an SBC codec support — no AptX here — and excellent in-ear detection. You only have to take one of the earbuds out and whatever you’re playing will be paused; it’ll then restart when you replace it. Until recently, true wireless earbuds weren’t very good at syncing audio with video, but like other recent efforts, the TicPods are practically impeccable in this respect. Another plus point for the TicPods is call quality. Since the mics are at the end of the stem, and thus closer to my mouth, my recipients were able to hear me almost as clearly as I could them.

Mobvoi advertises 4 hours of listening time from a single charge, with a total of 18 hours when you include the additional juice in the case. This mostly checked out in my testing, putting the TicPods on par with costlier sets and beating many others. Only 40 minutes are required to fully charge them too. If you're wondering, Mobvoi does have an app for use with its various products. In the case of the TicPods, it's simply a place to update the firmware or view a user guide with instructional gifs. 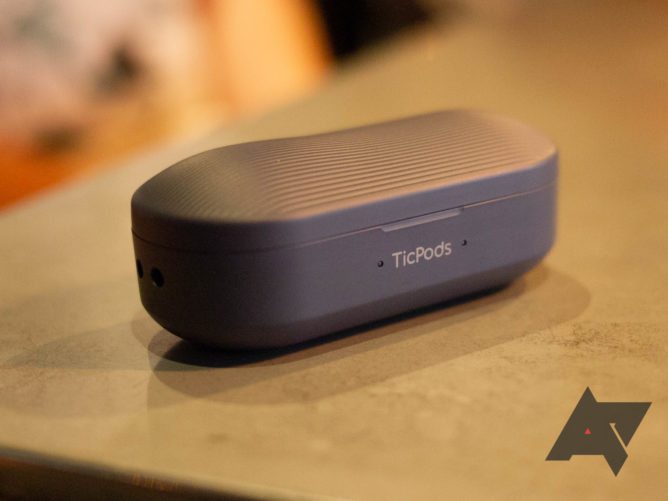 Quite possibly. The TicPods Free made a pretty good impression during my testing. That I had just tried vastly more expensive pairs from Earin and Master & Dynamic may have even benefitted Mobvoi; while these can’t compete on sound alone, they aren’t too far off in most other areas.

Sure, there were occasional connection problems, and they come with the older Bluetooth 4.2 standard, but that's still common in this category. Most importantly, they sound absolutely fine, and they have a ton of features you might not expect for $130 — plus you’ll likely be able to get them even cheaper on Black Friday or during the holiday season. If you can afford a bit more, something like the RHA TrueConnect ($170) might prove to be a better option (look out for our upcoming review), but you’ll be hard-pushed to find something as good as the TicPods for the same low price.

You want full-featured true wireless earbuds with decent sound and good battery life that come with a reasonable price tag.

You’re a discerning audiophile with a bigger budget who wants something that doesn't look like an AirPod. 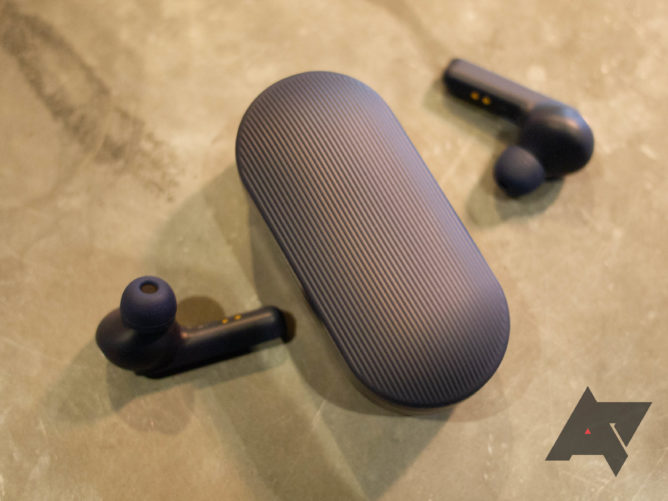