The updated Chromecast is now available in both colors on the Google Store in Germany, and only in charcoal on Flipkart in India. However, that color choice shouldn't matter much as you'll likely plug it in the back of your TV and never look at it again. There are no special offers for orders in Germany, but in India, users will get two subscriptions for free: one-year Sony LIV Premium and six-month Gaana Plus.

If you're interested, you can grab yours from the links below.

In related news, it seems like multi-room audio could come to older Chromecasts too by the end of the year. In reply to a user's enquiry, a support agent said that multi-room, which is now exclusive to the third-gen could come to the second-gen Chromecast and Ultra. 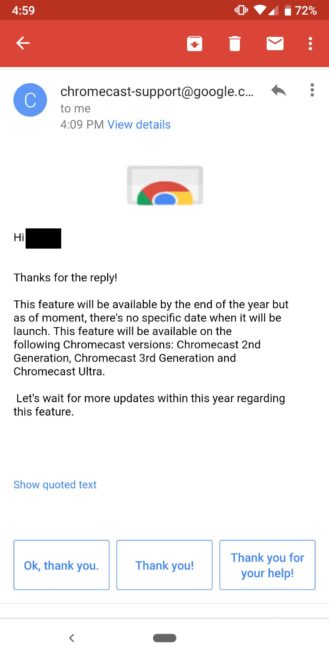 We all know that support teams aren't usually very reliable when it comes to future updates and unknown features, and Google hasn't said anything about this yet, so we've reached out for verification and will let you know if we hear anything back.