Last Friday (the 19th), the @Google account tweeted out that "Winter is coming for Chromebook..." together with a confusing video that showed a clip from Game of Thrones playing inside Slides on a Chromebook. The crossover event seems to have resolved as a new "White Walkers" page is now up on Google's Chromebook site. At first glance, it seems like an out-of-touch marketing effort, or a last minute attempt to use up acquired licensing, but parts of it are at least a little funny.

Video aside, the rest of the "White Walkers" marketing effort is a bit more cringey. Although someone at Google obviously put a lot of effort into the details included in the "New Recruit Orientation: Getting to the Wall" presentation in Google Slides — filling it with an impressive quantity of lore and jokes — the humor sort of wears thin after the 10th or 12th slide. That is, unless you find long-format business-related humor really entertaining. 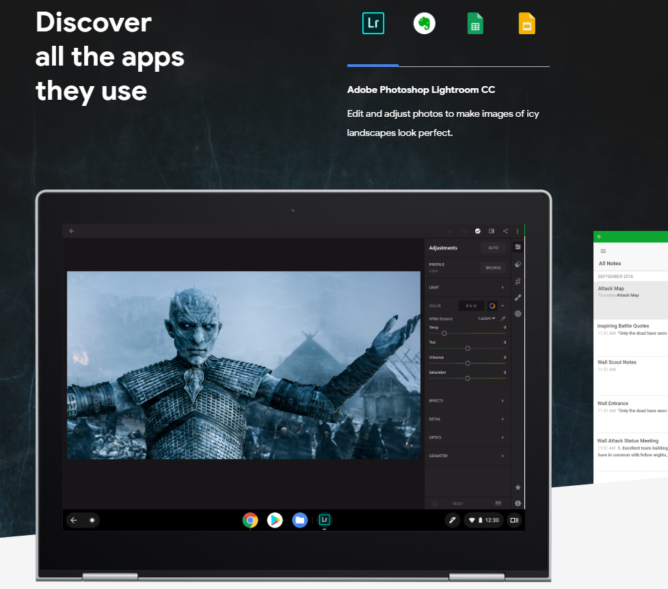 The page invites you to both subscribe to HBO NOW to watch the show, and discover all the ways the White Walkers "work better together [emphasis added]," including the apps they use on their presumably temperature-abused Chromebooks. It's pretty curious that particular phrase appears just after the "Better Together" feature went live in Dev channel just yesterday.

Google also announced the existence of this new marketing effort via the Google Blog, so if you're really into Game of Thrones stuff, business jokes, or being in touch with your fellow kids, be sure to check that out in addition to the new site. For all we know, related advertisements could be rolling out on TV or YouTube soon.