Back in 2008, Verizon agreed to the FCC that it wouldn't lock its LTE phones in exchange for winning the 700MHz Upper Block C spectrum. Earlier this year, however, Verizon decided that it didn't have to follow the rules anymore, announcing that its phones would no longer be SIM unlocked out of the box. Google's Pixel 3 and Pixel 3 XL are the first Android phones to follow this policy, which is proving problematic in some instances.

As we all know, Verizon is the only major US carrier that offers the Pixel 3, which means that the only way to get one in hand yesterday without having pre-ordered one was via a Verizon (or Best Buy) location. We had previously been unaware of this, but some Best Buy locations will sell the Verizon Pixel 3 at full retail even without a Verizon account. You can probably guess where this is going; several non-Verizon customers purchased VZW Pixel 3s at Best Buys intending to use them on other carriers, only to be greeted with "SIM card isn't supported" messages on their shiny new phones. This could also be a problem for people buying these phones secondhand on sites like eBay, Swappa, and Craigslist.

For now, it's unclear if there's an easy way to get a Verizon Pixel 3 unlocked. Some say that putting an active Verizon SIM card in the phone for 24 hours will make it eligible to be unlocked, while others claim leaving an active Verizon SIM in for a few hours will automatically unlock it, but we don't know because Verizon hasn't put the new policy on its site yet (great job, guys). Tl;dr: if you're buying a Pixel 3 and you're not a Verizon customer, make sure to double-check that you're getting one from the Google Store or Project Fi and not Big Red.

In a strange twist, it looks like Verizon has begun to automatically SIM unlock every Verizon Pixel 3 with an active Verizon SIM in it. 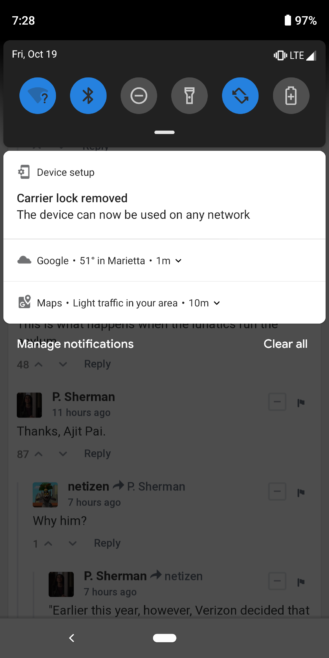 It's not clear if this is due to the backlash or if it was planned, but either way, we can't complain. We've reached out to Verizon for clarification.

Verizon provided us with the following statement:

At launch, there was an update related to an automatic overnight unlock on Pixel 3s, which also showed up on phones sold in Best Buy stores. We have temporarily removed it from Pixel 3 and are assessing where it will be implemented in the future.

As you may recall, earlier this year we began locking phones until they were initially activated on the Verizon network to prevent theft and protect employees.

In short, Verizon is temporarily SIM unlocking all VZW Pixel 3s, but is looking for ways to reinstate it. So if you were affected by this issue, don't get too excited just yet.

Chrome may get a new way to share tabs between mobile and desktop, plus incognito media ...