Google's yearly invitation-only event for app and game developers took place today in Berlin and San Francisco today, and the key message was about reducing the size of app bundles. This new way of dynamically delivering Android apps was introduced this summer and support was added to Android Studio 3.2. Here are the main takeaways from Playtime 2018.

According to Google, "smaller apps have higher conversions rates" — this makes sense, as larger apps are the first to go when you're running low on storage, a common problem with low-cost hardware. When announced, app bundles were said to be capable of reducing file size by up to 35%, but there are some new reasons to embrace the updated method.

With no additional work for developers, app bundles are going to get even smaller. On average, these extra savings add up to 8% smaller files on download and 16% smaller on the device. As mentioned above, bundles can now be built using Android Studio version 3.2, as well as Unity 2018.3 beta. Another earlier access feature that's currently being finalized will allow uploading of large app bundles (up to 500MB) without using expansion files. For more information see Google's updated support page.

Up to now, developing an Instant App has meant publishing a separate installable app at the same time. Thankfully, you'll no longer have to maintain two different apps, with support for a single app bundle coming to the Android Studio 3.3 beta. Google is referring to this as a "unified app bundle," and it should make Instant Apps much easier to publish. 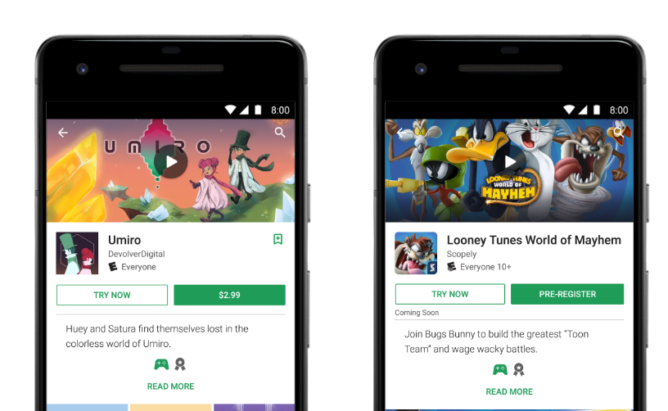 It's a handy way to to give apps a try before you buy, and Google Play is adding two new members to the 'Try Now' catalog. Umiro is a striking action puzzler by Devolver Digital, and Looney Tunes World of Mayhem from Scopely is an RPG feature everyone's favorite 2D characters.

More unification will be found in the Google Play console, combining the reports of Firebase Test Lab and the Android Vitals initiative to give developers even better insight. This will hopefully lead to more stable apps with more actionable solutions for when things do go wrong.

That's just the tip of the iceberg of what was discussed at Playtime 2018. To read more about changes to app management tools (for retaining subscribers, flexible pricing, better metrics, and easier updates) and the Academy for App Success (with interactive educational courses), take a look at the full post on the Android Developers Blog in the source link below.