Local Guides — the name for prolific contributors to Google Maps — get occasional perks from big G after all the photos and reviews they submit. The latest benefit is a three-month membership to Google One, which includes 100 GB of storage (in addition to the other membership perks like occasional credits, discounts, and extra support). The only catch seems to be that not everyone is getting this offer, and it can't always be redeemed. 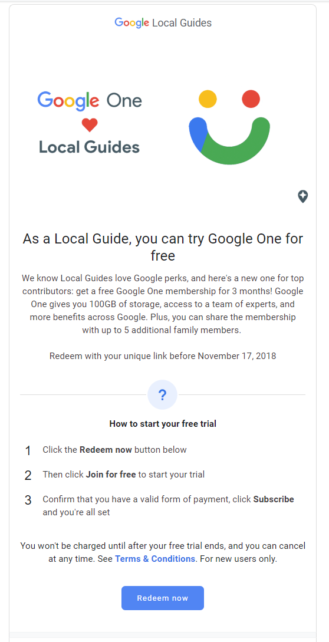 Only one of us (Artem) has received the email describing the offer, although there are other folks here at AP with the same Local Guide level 6, so we aren't sure what sort of pattern could be at play. It could be they're going out in waves, or some other degree of qualification behind Local Guide level may apply.

Those that do receive the email will also have to make sure they're eligible to redeem it. Artem was unable to get the offer to work on his account even though he was sent the email. That could be because he already pays for storage, or some other set of undefined restrictions could be in place, but presumably, Google would already know when sending out these promotions. Humorously, the Terms & Conditions link in the email is also currently 404'ed.

Other reports on Reddit note better success, as well as a $5 Play Store offer for accepting the three-month trial. Keep in mind, if you fill up past your account's free allotment and don't renew your plan, you'll have to figure out a new way to store your stuff, though all your files will still be accessible.