It's been a bad year for data privacy — though it might be more accurate to say it's been a bad year for blissful ignorance. User data privacy issues are suddenly erupting into the spotlight after bubbling under the surface for years. While Facebook provided the most scandal fodder so far this year, Google hasn't been immune. One issue that gained widespread attention was its misleading representation of how Location History tracking works. After changing the wording on its support page in August, the company has now once more edited the page, moving to a description that is technically correct, but slightly more vague than its original fix.

For context: in August the Associated Press reported that Google continues to track a user's location through some of its services, like Maps or Google Search, even when they turn off the Location History setting. This is not exactly surprising — and, in fact, Google does warn you of this when you turn off Location History — however, the main issue was how the Mountain View tech giant portrayed the setting on its support page. Under "Turn Location History on or off," the company's website read: "With Location History off, the places you go are no longer stored." There were no caveats. 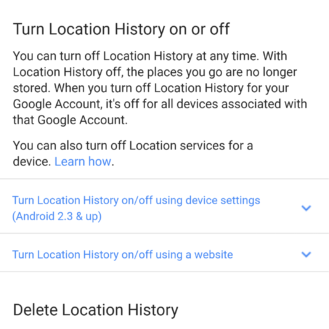 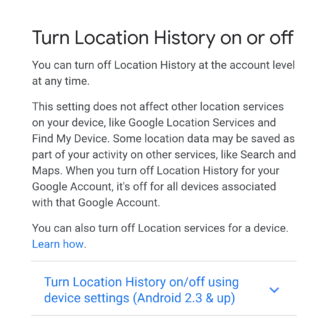 Subsequently, Google edited the language to be much more explicit, noting that it turned off Location History for the account, but other services on the device would not be affected. It failed to mention, however, that there is a more thorough option for getting rid of tracking, which is to also toggle off Web & App Activity in account settings under Privacy Checkup.

Since then, Google has quietly changed its wording once more, and although it's no doubt legally bulletproof, it's a bit less clear than it was in August. It now avoids mentioning that other services won't be affected by turning Location History off, but makes sure that turning off Location History only refers to the user's account.

Current language as of October 2018.

It also now notes that it's up to administrators to make the Location History setting available to users on work or school accounts, and provides step-by-step instructions for finding the setting. This part is admirable, since it makes the setting a lot easier to find. Plus, as noted above, once at the setting, users are warned that other services won't be affected.

Still, it seems like there's no particular reason not to include the warning on the support page. Beyond that, some would argue that Google has a moral obligation to be more transparent about how it tracks users' location and activity — perhaps even to the extent that it proactively broadcasts educational materials and tutorials to the public. That's not really in the interest of the company, though, so unless it faces legal repercussions or changing regulations (which is certainly possible), this will likely be the status quo for quite a while to come.