Listen, I'm not going to tell you the Oukitel OK6000 Plus (yes, that is actually the name) is one of the best smartphones on the market. But, it does look basically normal and has a battery large enough to start a jet ski. Oh, and did I mention it's $123 today only on Amazon? Yeah. I don't think I need to tell you this phone isn't going to blow you away with specifications. It has a 5.5" 1080p display, 64GB of storage, 4GB of RAM, and a MediaTek MT6750 octacore A53 processor with LTE. It has cameras. This phone is, technically speaking, basic as hell.

But, if you're in need of a travel phone, or just something as a backup, you could do a lot worse than this Oukitel, and it's a full $47 cheaper than Amazon's normal MSRP of $180 (and it's never been discounted before, as far as we can tell). 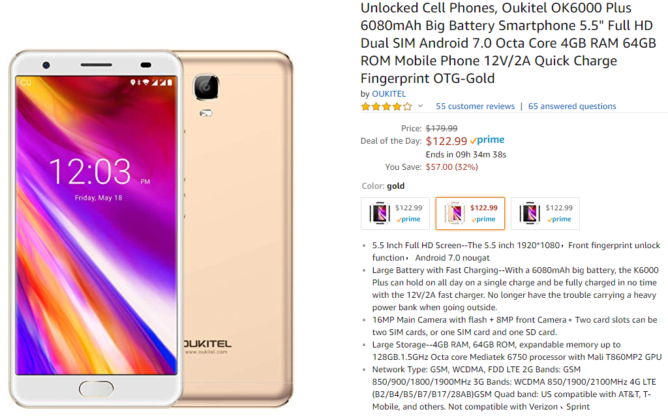 Yes, it runs Nougat. And yes, it probably has a really horrible software overlay that will make you want to scratch your eyes out. But with a battery that size, you'll probably get tired of chucking it against the wall in frustration before this thing ever dies - and that's really the beauty of it. As for the stuff that matters, like LTE network support, you can rest assured that it supports some bands. Not all of them, mind you. And, in fact, not most of them! Specifically, you get bands 2, 4, 5, 7, 17, and 28, which does mean T-Mobile band 12 support is lacking. And Sprint and Verizon, as you'd guess, don't work at all.

Did I mention it's $123 and has a battery as big as an iPad's? It even comes in three colors, which is more than most phones costing three times as much. You can get it in gold, because why the hell not? Really, what more can you honestly ask of this battery-that-also-happens-to-be-a-phone? I honestly don't know.

Google is testing a new "Explore" UI in Chrome's new tab page, can be enabled in flags