A Google Home is far from your only choice if you want a speaker with Assistant support. Tons of companies are making them now — including Riva Audio, whose Arena and Festival speakers are currently on sale for $100 and $200 off, respectively.

As you could probably guess from the pricing, the Arena is the smaller speaker of the two. Riva claims that the Arena reproduces "more of the musical spectrum than any comparable product," which is saying something. You can get an optional battery pack for it that provides up to 20 hours of unplugged listening time. That's also on sale, down to $49 from its usual $79. 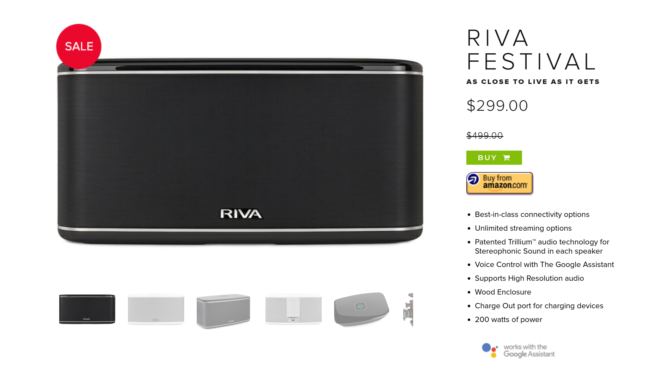 At 14 pounds, the burly Festival speaker isn't made to be mobile, but its 200-watt amp and three woofers promise pretty great sound. Reviews bear that out; 75 percent of reviewers on Amazon give the Festival a full five out of five stars. If you're looking for something like a Google Home Max but don't want to drop $350 on it, this might be the one for you.

The deals are "holiday savings in October," according to Riva's website. It's not clear how long the pricing will last, though, so if you're interested, don't wait too long.

Latest Pixel 3 leak shows off the 'Sand' color, which is basically pink