There's a lot to like about the Essential Phone, especially when it comes to its physical design and software. While the IP54 rating doesn't protect against accidental dips, the titanium and ceramic body exudes a character of quality very few phones can rival. Although problems like the scrolling stutter/jitter and signal strength issues seemingly can't be fixed, the PH-1 has a stellar update history. A drastic reduction in price can change dealbreakers like that into compromises for many.

AP's Jackson Hayes gives his impressions of the Essential Phone.

Android enthusiasts on a budget have been drawn to the PH-1 for the quality of its software. Still, the phone's problems preclude my general recommendation. For the vast majority of people, the Essential Phone is still a poor choice, even if it's a joy to hold with a great update history and stock Android.

As an aside, I'd also like to point out that I didn't get a review unit from Essential. I bought my PH-1 with my own money last year, so my consideration of its quality and value have more than just an abstract basis. What has (or hasn't) changed?

Consider this "re-review" an addendum to our previous review. I'm not going to rehash everything about the phone that hasn't changed. The biggest difference, in my mind, is the PH-1's update to Android 9 Pie: Not a lot of hardware has received an upgrade to this latest version of Android, putting the Essential Phone in rare company.

Although both Nokia and OnePlus have updated a phone each to Pie, the PH-1 got it the very same day that Google's Pixels did and, most importantly, Essential seems to have done a better job. My OnePlus 6 on Android 9 is still a bit buggy, while the PH-1 is Pixel-level stable. Coupled with the timely delivery of monthly security updates, I think that Essential has the best update history and software of any Android OEM — outside of Google, anyway. The Essential Phone may not have gotten some of the first-party secret sauce that the Pixels get, but it's a surprisingly stock experience in a world where even OnePlus feels the need to make pointless changes to Android. I won't reiterate all the features present in Pie (you can read our prior coverage in detail if you're interested), but everything in Android 9 that wouldn't obviously be exclusively tied to Google's Pixels is present on the Essential Phone.

In my opinion, Essential's "light touch" software vision is the ideal approach to Android, and it's unfortunate that more OEMs don't share it. Coupled with the frequency of updates, Essential's fans have plenty of reason to be pleased. Unfortunately, software isn't everything. 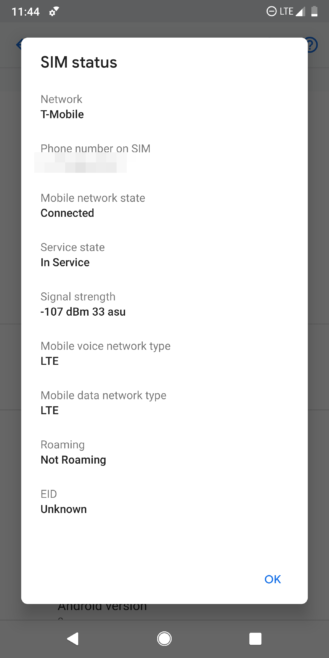 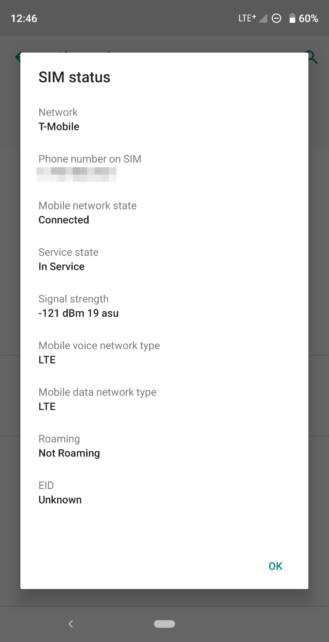 Signal strength on Pixel 2 XL (left) and Essential PH-1, both in exactly the same position/location. Not a joke.

Signal issues are still present on the PH-1, which is unfortunate. In my testing, there was typically a 10-15 dBm (read: large) difference between the Essential Phone and my other devices.

Previously this issue was so bad that I'd even randomly lose data and miss calls while out and about, all the while being told by the phone that I still have a signal. While those specific frustrations haven't happened in a while, I still see a worse signal on the Essential Phone compared to literally every other device I own, and it will easily lose all signal in areas where other handsets have no problem. 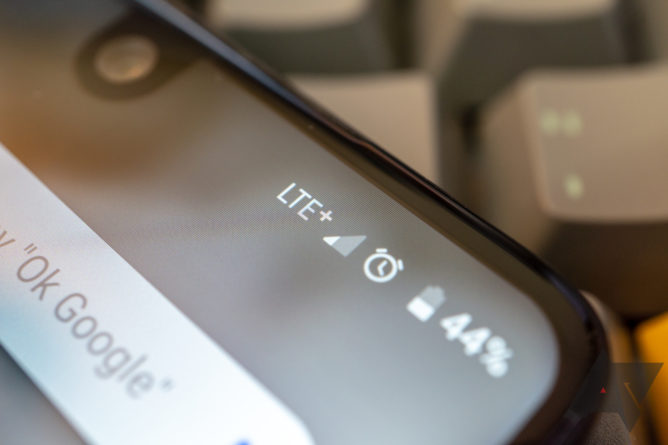 So far, it seems like reports of signal strength issues are tied to using the phone on T-Mobile. Those on Sprint, Verizon, and AT&T don't seem to have any problems — or, at least, they aren't as vocal about them. Even on T-Mobile, if you live in a dense city with good coverage, then it probably won't be a frequent issue, but if you're out in the boonies, it'll be a different story.

The Essential Phone's touchscreen is also still janky, and more than just stuttering with the appearance of dropped frames when scrolling.

Sometimes it’ll even stop registering touches properly for me, with sensitivity/rejected touches being a bit of a problem on the edges. On the opposite end of the spectrum, I’ll also get random “ghost” input/touches. In pretty much every way, it seems Essential messed up touch input on the PH-1. While a quick cycle through sleep with a press of the power button fixes some of these touchscreen issues in the very immediate short-term/next few minutes, it’s still incredibly annoying, and not something that should happen on a flagship, mid-range, or even budget phone from any recent year.

There's also a very annoying and very specific issue the PH-1 has that drives me to unending rage: hotword detection in the standalone Android Auto app. I can (and have) literally screamed "OK Google" at my PH-1 for a full minute in my car, phone in hand, trying to coerce the Google Assistant via Android Auto to appear. The phone will consistently fail to both show me the Assistant and, on the rare initial success, then fail to recognize "navigate home," or any other command. It's infuriating, and no other phone has an issue. 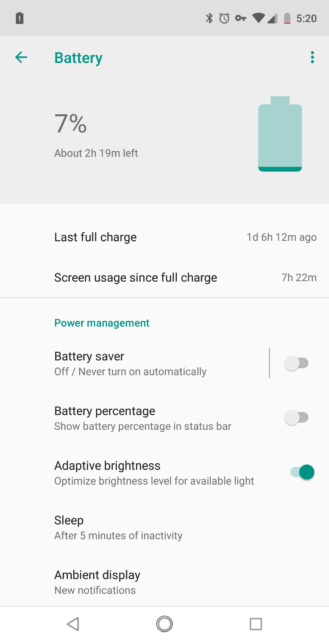 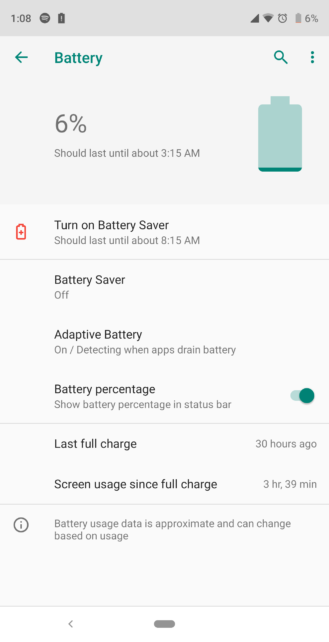 The Essential isn't just a bundle of compromises for cheap Android Pie, though. Back at launch, it had a few problems with inconsistent performance and only average battery life. While the company can't fix probable hardware faults like signal woes and touch input jank, any potential complaints about software performance have been fully resolved. The PH-1 feels consistently fast, and battery life is slightly ridiculous — at least, for me.

Just before Pie landed, I was able to get over seven hours of screen on time with the PH-1. That was mostly in light-duty use, but it's still very impressive. While I haven't seemed to hit those same numbers since the update (even after a wipe), I can still typically get around four hours of screen on time over two days, which is good. Camera performance was slightly improved with subsequent updates, but compared to even 2017's other flagships, it's not great. Low-light photo quality is better than it was at launch, but it's still noisy and prone to blur. Dynamic range is also not particularly good, with a tendency to blow out the brightest parts of images even as it misses dim details — hurting images from both ends of the spectrum simultaneously. While sometimes that's to be expected in low-light circumstances, the PH-1 does it even in good lighting, sadly.

Although the artificial bokeh/DoF "portrait" effect introduced via an update last year seems OK at first glance, all it takes is a crop to see that it's mangling and blurring edges that shouldn't be. With parallax data from two sensors to work with, that's not great. I've seen better "portrait" effects from single-lens solutions working off of PDAF data, and I'm frankly surprised that the Essential can't do a better job with the benefit of two cameras.

In bright light, you can get a decent shot, but nothing approaching Galaxy S/Note or Pixel level photos. Fine detail on a crop is still being mushed a bit, and color accuracy isn't perfect. There's more to a camera than just hardware, and some have had improved success using the Google Camera app on the PH-1.

At the original price, the Essential Phone's camera was (and is) pretty bad, but around $300 it matches what you can expect from other phones like the G6 near that price. With adequate lighting it takes good — but not great — photos. 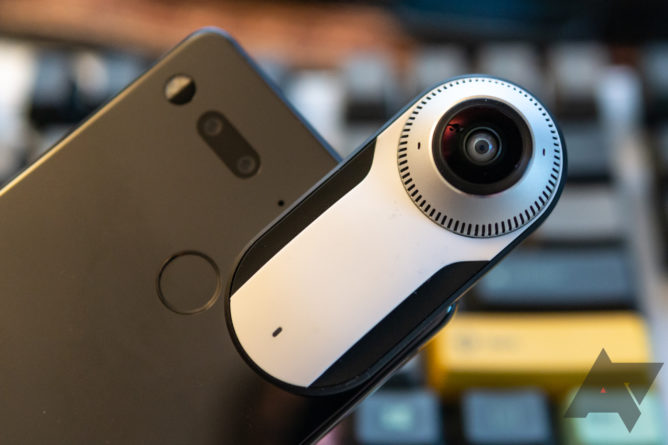 With the 360-degree modular camera accessory, the Essential is also one of the cheapest ways to take decent quality 360-degree photos and videos. The Ricoh Theta V might beat it soundly, but it's also $400, and you don't get a phone with it.

For a specific subset of Android fans, I'd say yes, the PH-1 can be a good value at or near its current pricing, and especially if it falls under $300 again. Android-as-Android enthusiasts that can't afford Google's (slightly ridiculous) Pixel pricing would be well served by picking up a PH-1, purely from a software perspective. You get stock, unadulterated Android with the fastest possible updates at an affordable price. For a very particular audience, there's no beating that. The company has even promised Android Q in the future. 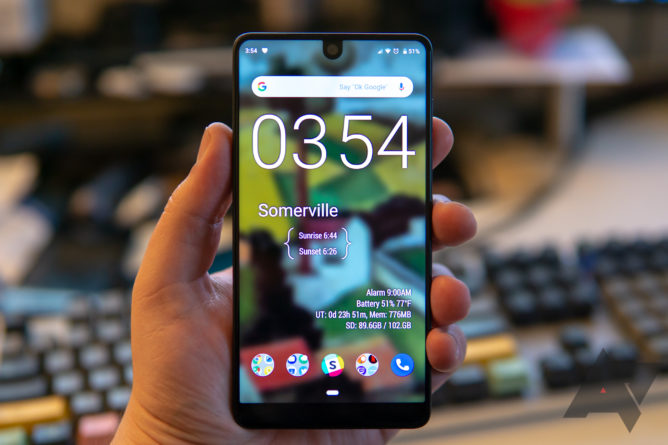 For everyone else, the PH-1 may not be a great choice. The phone has serious, seemingly unfixable problems. As a backup or secondary device for pure Android fandom, it could be a fun buy, but I can't honestly recommend it to general consumers considering it has issues even getting a decent signal — that's pretty basic phone stuff. Coupled with the touchscreen problems and input jank, the PH-1 will always be a compromise. The benefits of stock Android, quick updates, and fast hardware aren't the only considerations for most people. The overall quality of experience in day to day use is more important, and with its issues, the PH-1 can't really deliver on those needs compared to other phones, even at the adjusted price.

I fully expect the root/ROM community to pick the PH-1 up and run with it, considering the price and the ease of unlocking the bootloader. If you want good cheap hardware with the promise of homebrew longevity, the PH-1 could be a good budget alternative to a OnePlus phone or a replacement for an aging Nexus.

You can buy the Essential Phone at the retailers below:

23 temporarily free and 33 on-sale apps and games, including Planescape: Torment