Polk had the interesting idea of putting an Echo Dot into a soundbar, not only offering something that sounds better than your TV's speakers, but also adding Alexa to your living room. This all-in-one solution was dubbed the Command Bar, an unassuming soundbar that also happens to have what looks like an actual Echo Dot shoved in the middle.

If you want Alexa in your living room and to simultaneously improve your listening experience, then the Command Bar is for you. It provides pretty good sound – certainly adequate for the average consumer – and you have the added bonus of a smart speaker. You can even tell the soundbar to change inputs, adjust volume and bass levels, and so on.

However, if you already have an Echo device in (or near) your living room, the Command Bar isn't the best product to buy. At a $299 MSRP, it doesn't hold up to similar options in this price point.

The Command Bar doesn't break new ground here; it's a 42.95" x 2" x 4" bar that runs underneath your TV. There's an option to wall-mount it, too, if you feel so inclined, and there are spacers included for cable routing. Overall, it's a pretty inoffensive looking device, easily ignored as you're watching your favorite content. 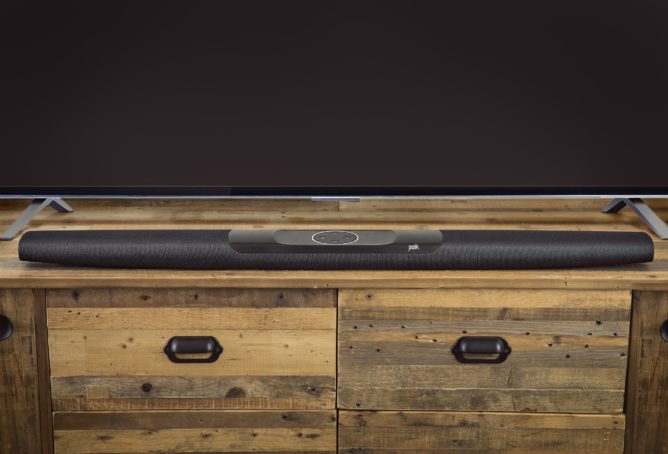 Trust me, this looks way better than my living room

Where it breaks the mold is the seeming inclusion of an actual Echo Dot smack dab in the center, along the top. It's not actually a full Dot (it's missing a few features), but it looks like Polk got the okay from Amazon to use the design — there's even the LED ring around the four buttons.

Accompanying the Command Bar is a wireless subwoofer, which obviously only requires power. This means that you can easily stow it away anywhere you like. In my case, I placed it alongside my couch right in front of an outlet. That way, it was well hidden, but still plenty audible (and quite easily felt, too). 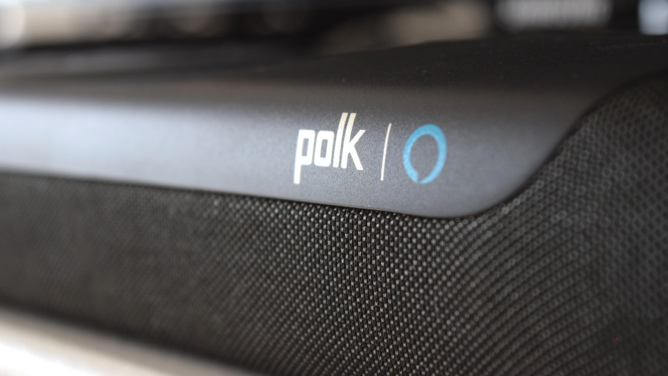 The Command Bar's remote not only controls inputs, volume, and bass level, but it also has a dedicated Alexa button to manually trigger the soundbar to listen. Unfortunately, unlike the Shield TV's remote, this one doesn't have a microphone, meaning that you can't speak to it directly. Thankfully, it's solid with clicky buttons – though, they are a bit spongy – and a soft fabric carrying case is included. There are also options for the sound presets, media playback controls, and mute toggle.

Polk included some preset IR compatibility right out of the box so that you can use your TV's remote to control the soundbar's volume. Taking this a step further, I took the time to configure my Shield remote so that it, too, can adjust the Command Bar's volume (and turn my TV on and off). 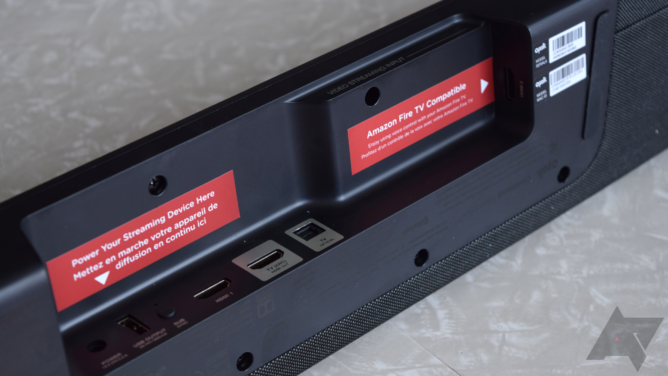 For connectivity, you have HDMI and optical (which I used) inputs, two HDMI ports for pass through/switching, and an always-on USB port. There is support for ARC, so that might be good for some of you. Oh, and one of the HDMI inputs is recessed into a cavity, so be prepared for that.

Arguably the most important element in a soundbar is its audio quality. Odds are that almost anything that you go pick up, including the Command Bar, will be significantly better than your TV's speakers. So in that regard, Polk hit that nail on the head. But you didn't come here for that, I'll wager. 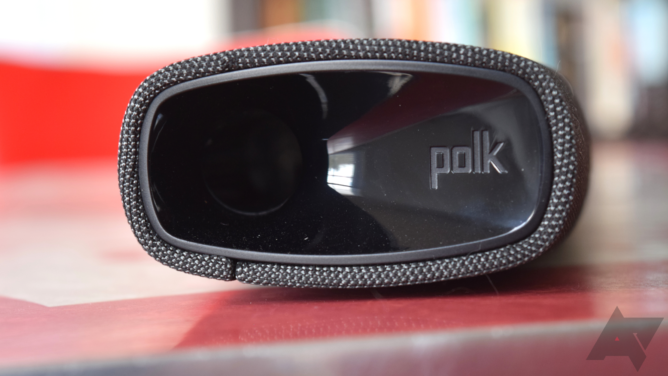 The Command Bar's sound quality is okay, but mediocre, feeling flat and boring; however, it decently complements what you're watching or playing, especially when it came to dialogue or other spoken content. Sheer volume is not a concern here — I didn't dare test how loud it could get, for fear of disturbing my entire apartment building. Polk's wireless subwoofer really helps round it all out, providing a strong thump to music and a wider depth to voices and sound effects in movies and such. 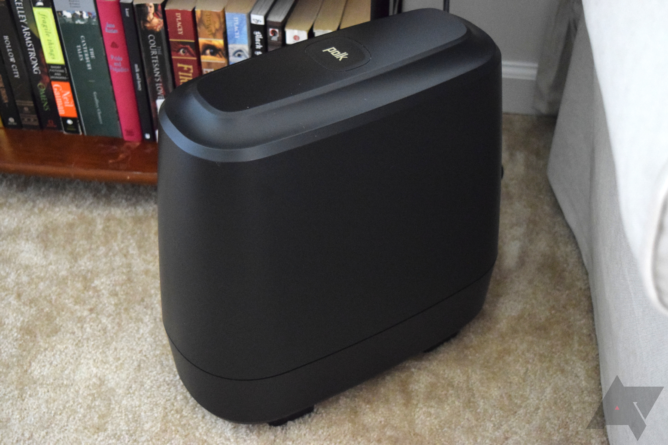 The Command Bar features a few sound options. For starters, you can adjust the bass and voice volumes to create a blend that works well for you. There are also presets for music, movies, and sports — I don't watch sports, so I can't speak to the latter, but the music mode adds a bit more punch to the sound while toning down the vocal tuning you might hear in the movies preset. And for you night owls, the night mode is great. It evens things out and cuts down on sudden jumps in volume.

For the general consumer, the Command Bar is more than enough to drastically improve the sound quality of their favorite A/V content.

The selling feature of the Command Bar is the inclusion of Alexa. Don't let the Echo Dot design confuse you, however, because this is not a full-fledged Echo device. It's missing certain features like multi-room audio, alternative trigger phrases, voice calling, and broadcasting, but Polk assures me that these will be added "as soon as they're available."

Other Alexa features work fine, including Spotify (Premium) integration. You also have the added bonus of being able to tell your soundbar to switch inputs, change the volume, or start up content if you have a Fire TV. 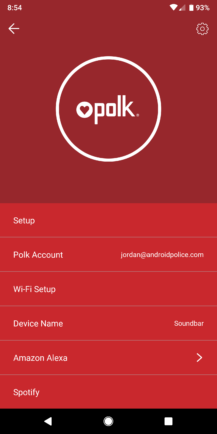 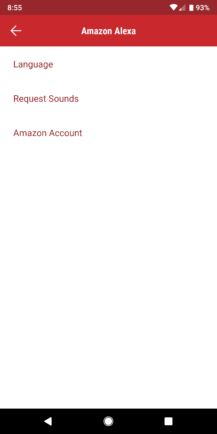 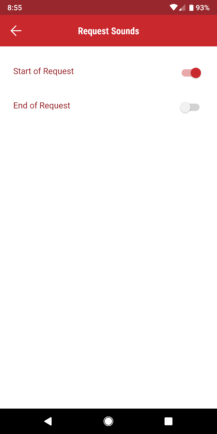 Setup is done through the very spartan Polk Connect app. It's a smooth and painless process overall, and the app itself handles and checks for firmware updates. There really isn't much else to it.

During the course of my review, I was more frustrated with Alexa than pleased. I find her to be less helpful than Google Assistant, but this really isn't the place for that. On the Command Bar, Alexa was more annoying than ever, constantly activating when it heard words that couldn't possibly be misconstrued, whether during conversation or from something on the TV.

Me to Polk Command Bar (with Alexa): "Alexa, tell me about the weather right now."

Yes, that's exactly what I said.

While that's annoying on my Echo Dot, it's worse on the Command Bar since it muffles the TV volume so that it can hear you. And when I did want to activate Alexa, I had more errors than successes. She ended up not getting used at all, making the random wakes all the more irritating.

At a $299 MSRP (though I saw it dip to $249 over the course of this review), the Polk Command Bar is not quite what I'd expect. You're paying for Alexa in a $199-$249 level soundbar, so if you're more interested in audio quality, the Command Bar isn't the best option. Obviously, Polk is banking on people purchasing one to get the Echo Dot features.

My general thought, however, is that you'd be better off getting something else in the $299-$349 range and picking up an Echo Dot when there's a good deal on them. However, since the Command Bar has gone on sale for $249 (and likely will again), that's a hard deal to pass up. In my view, you're basically getting an Echo Dot (sans some stuff) for free at that point, but I digress.

In the end, I have a difficult time firmly answering the "Should you buy it" question for the Command Bar. It's a fine product and certainly not a bad purchase, but you have to decide whether it's worth it to you. If you want to add an Alexa device to your living room that also doubles as an improvement over your TV's speakers, then by all means. But if you're just looking to improve your listening experience while watching something on Netflix, and Alexa means nothing to you, then look at other soundbar options in this price range. 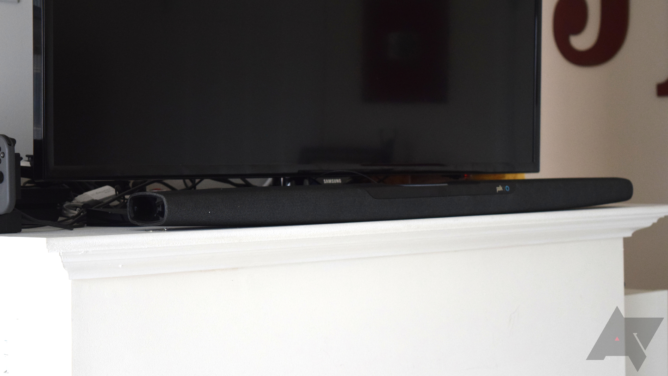 If you're okay with something smaller, then you might want to check out Polk's MagniFi Mini, which Rita quite enjoyed. It lacks a voice assistant, but it supports Chromecast and it can be paired with a Google Home. It's also $299, but it has dropped below $200 before.