Snapchat's Android redesign started cropping up for some users a few weeks ago with the 10.40 beta. By switching on "Snapchat Alpha" in settings, users were able to gain access to the new, much smoother version of the app, announced roughly a year ago in November 2017. The overhauled Android Snapchat was built from the ground up to replace the current app, which has long faced criticism for slow, choppy performance. However, not everyone was able to get it at the time. Now, tips from our readers indicate the alpha is rolling out to a wider audience. 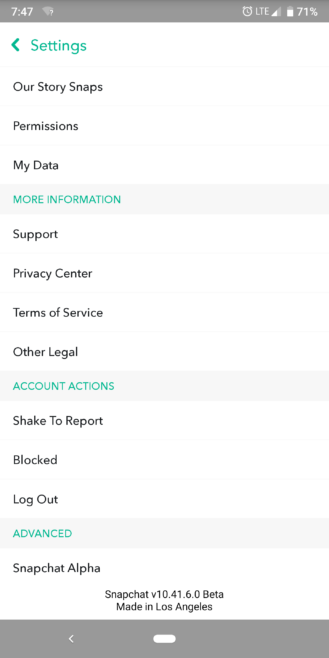 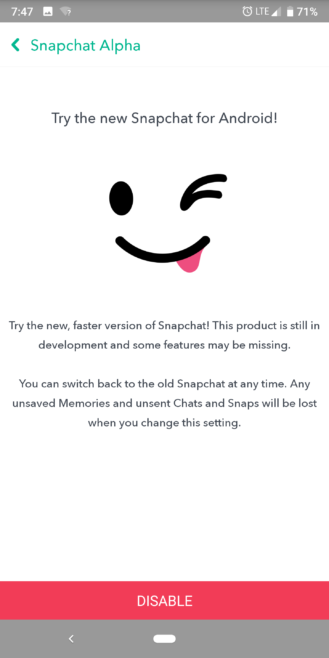 Readers using version 10.41.6 of the app (both beta and public) are reporting the ability to access the Snapchat Alpha under the "Advanced" heading in settings. The page invites users to install the new release with promises of faster performance but warns that some features might be missing as development is still underway.

Indeed, while users report a clear performance boost and a few minor aesthetic changes, they also note that some features are missing, including trophies, snapcodes, custom stickers, calling/video calling, and the ability to add to a live story. There are so many omissions, in fact, that one of our tipsters opted to stick with the beta for now.

Still, if you're interested in trying it out and don't see the option in your app, you can always try grabbing the latest Snapchat version from APK Mirror.

Looks like Snapchat Alpha is showing up for readers with the public version of 10.41.6 too. Thanks for pointing that out, Jordan!