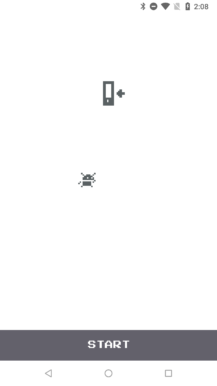 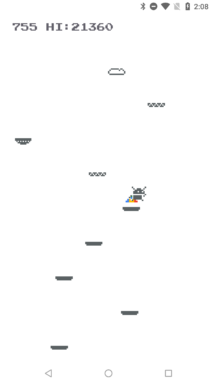 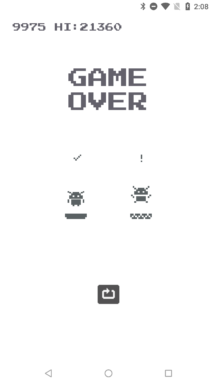 Yes, there are visual changes, but we both know you're here for the easter egg. There's a secret buried in Play Games and it's called Boingo. Well, at least it should be based on the name given to it in the code, but I haven't seen that name anywhere on the screen.

Boingo is basically a reimplementation of the classic (?) mobile game Doodle Jump. You'll tilt your phone to guide the doodle bugdroid from platform to platform and climb as high as possible. There are different types platforms that speed up your trip or challenge your ability to climb higher, and some obstacles to avoid. The goal, as everybody probably knows, is to avoid falling back down. It's a cute time waster, if nothing else.

So, how do you find Boingo and blow several several minutes being non-productive at work? First, switch to the Arcade tab at the bottom of the screen – it won't work from any other tab – then long-press on the Arcade tab for about a second. The screen will instantly flip to the Start screen shown above, and you can begin playing. 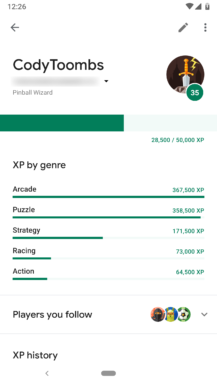 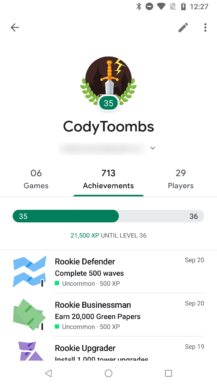 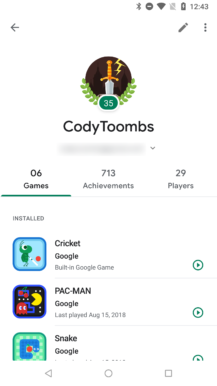 The biggest visual update comes to the profile page, where the information is now broken into three tabbed pages for Games, Achievements, and Players. The new tabbed page began rolling out to a limited group all the way back in July with the v5.10 update, but now appears to be widely available in this release. 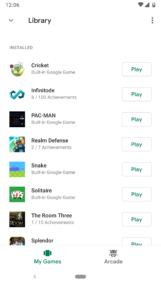 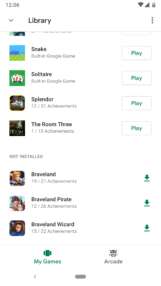 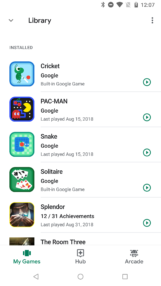 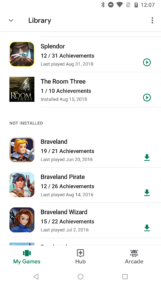 Changes can also be found in the My Games view, where listings now show the last time you played a game or when it was installed in addition to a count of your achievements. There are also adjustments to cosmetic details like the look of the Play button and size of game icons. 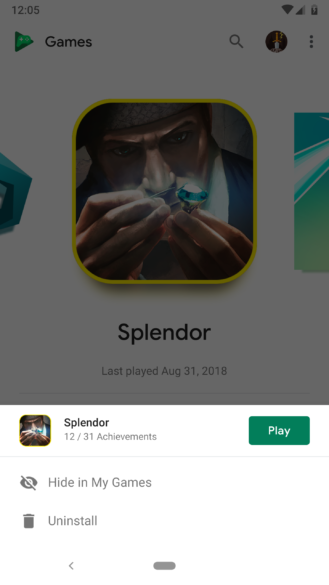 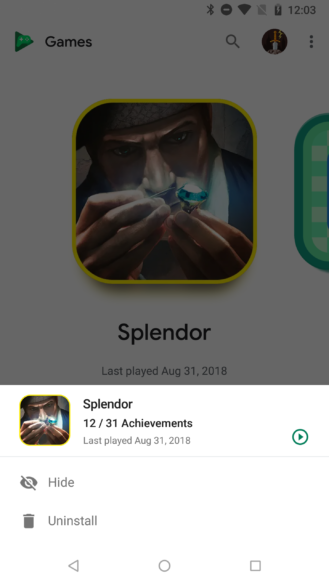 Similar treatment has also been given to the long-press menu for games in the carousel, and a few other places around the app. 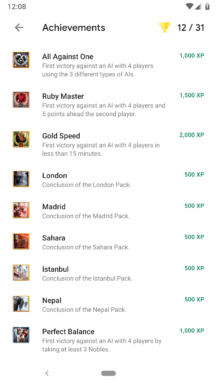 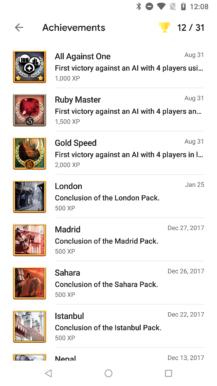 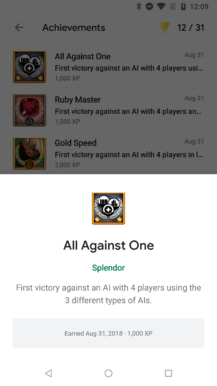 And we'll end with the Achievement screen, which has given the same enlargement to the icon as seen elsewhere in the app, but also rearranged the XP value to the bottom of the listing as the date of the achievement takes its place. Listings can also be tapped in this version, which reveals a popup card that contains basically the same information, but in a less cramped format.

Achievements were a major revelation in gaming, giving developers a way to add more background and bragging rights to their games... And yes, at almost no cost they're also a lame way to add a thin veil of replayability to games that otherwise had none. ("Find every item on the level? Who has time for this, somebody Google for a map.")

While Play Games has offered achievements for a long time, it was lacking any indicator about how commonplace any given reward was. Google has also added this staple feature so you'll feel all the more awesome after scoring that one ultra rare achievement that eludes even the best gamers. 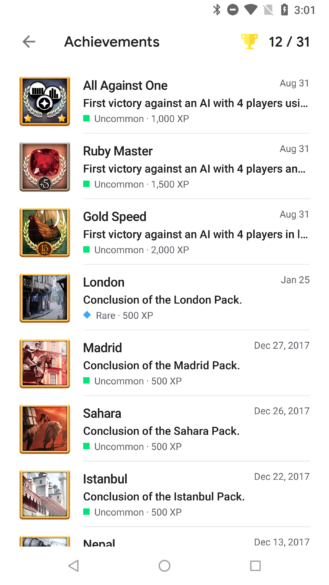 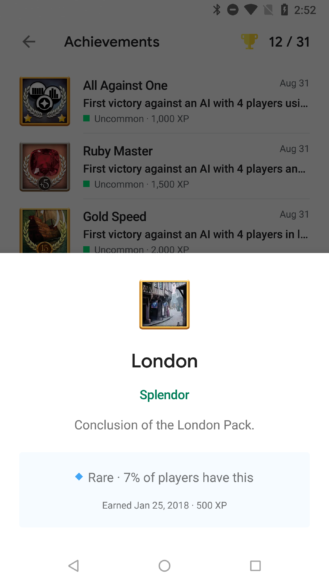 Rarity levels appear to come in Common, Uncommon, Rare, and Ultra Rare. If you tap on an achievement to view its card, you'll see a percentage of how many players have acquired the achievement.

You may notice that the rarity levels are appearing in these shots, but not in the ones from the section directly above. I'm just guessing, but perhaps this means it might be in limited availability, or maybe it takes a couple hours to sync up. Whatever the reason, just don't be surprised if rarity levels aren't visible immediately after installing the latest version.

If you take your gaming seriously, you might enjoy having a widget on your home screen for even faster access. The latest update includes strings and a configuration activity for creating a widget. There's really not much here to comment on, it looks like this might just contain shortcuts to the Profile, Arcade, and Hub. There will probably also be a list of games, probably making them a little more visible for fast launching.

The final topic is a bit less clear, but it seems potentially interesting. There is a name for a new notification channel called Play Games Controls. Additional text links this to a "game room" feature, which likely means it's for organizing multiplayer games or managing turn-based games. There's a label for Now Playing, plus commands called Play Next and Exit Game, which reinforces that theory. So it looks like this will give users the ability to respond to events without switching from their current app. That sounds like a pretty nice convenience.

Kernel source code for the Nokia 6.1 is now available